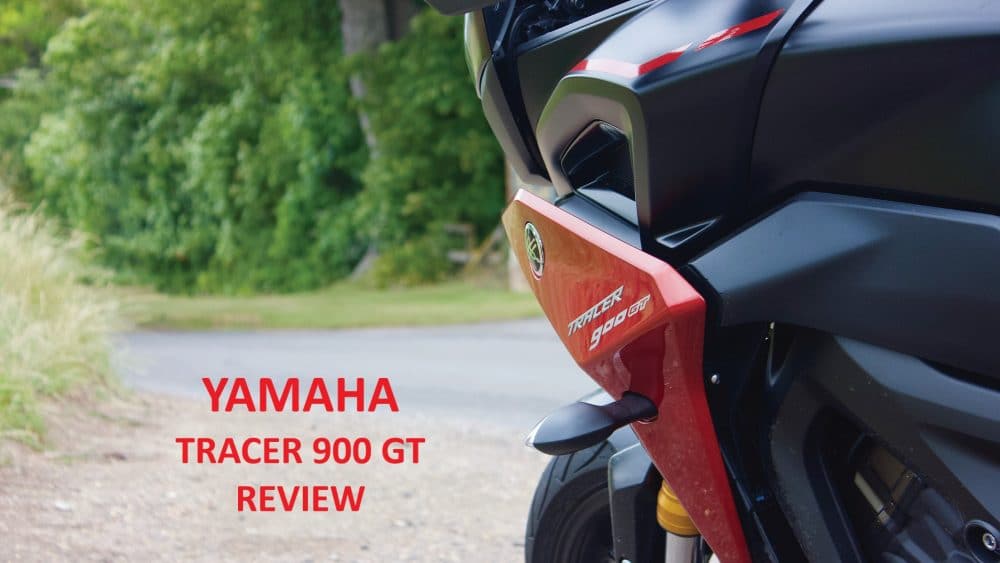 There are a lot of motorcycles that, on paper, look perfect. Ride enough bikes and apply a little critical thinking and you can start to spot the things you like and the things you don’t in each offering. Eventually, you build up a list of the best aspects of each, mentally combining them into one bike that, if it existed, would have no peer. For me, that bike could well be the Yamaha Tracer 900 GT.

Years ago Triumph emailed existing Street Triple owners like myself a survey in an effort to discover what features and technologies we would prefer they focus on for future versions of our bikes. Many of the items they proposed in that survey made it into the current 765cc Street Triples, but one major variant never materialised. I’d always believed that my Street Triple would be perfect with a small half-fairing and hard luggage. Triumph teased that very idea in the survey, but it would appear that more power and gadgets were more interesting to other respondents.

Now that platform sharing has become the new normal, bikes like the Tracer series are inevitable. Developing, and crucially homologating a road engine is an expensive business, so manufacturers have joyfully embraced the opportunity to cheaply fill out their product lineup by reusing the same architectures. Take BMW as an example; there are Naked, Sport-Touring, and Adventure motorcycles based on their 1250cc boxer engine and associated running gear. The same is true for their 1000cc inline-four, which can be had in Supersport, Naked, or Adventure- format. 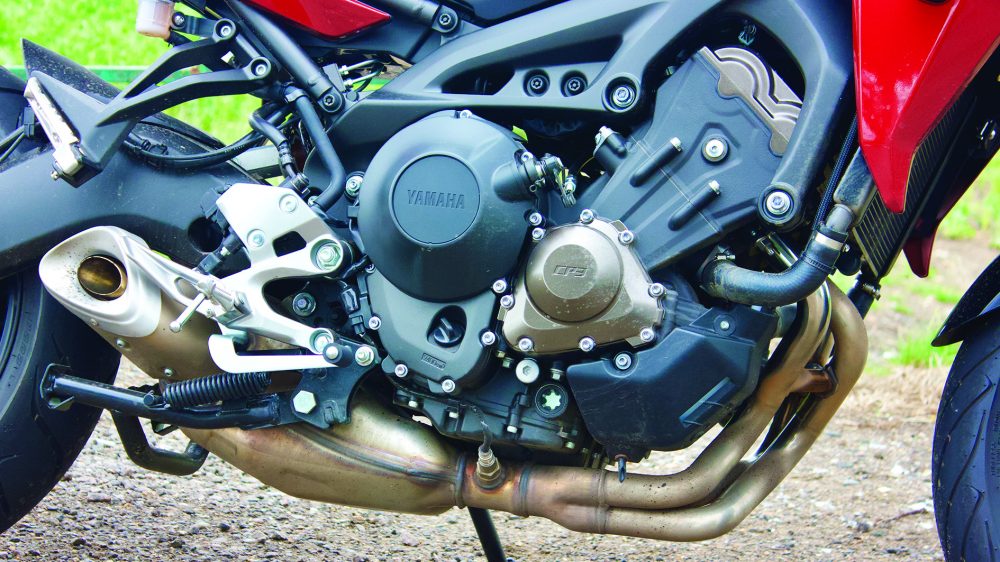 Yamaha’s naked MT-07 and MT-09 motorcycles donated much of their engineering to their Tracer variants, and the 700cc engine has even arrived in Teneré format. But while the Tracer 700 has previously proven itself a worthy adversary for the Suzuki V-Strom 650, the Tracer 900’s 847cc three-cylinder engine means that the bigger bike has the potential to represent that most elusive of concepts: a perfect combination of sporting performance, touring capability, and every-day riding practicality. 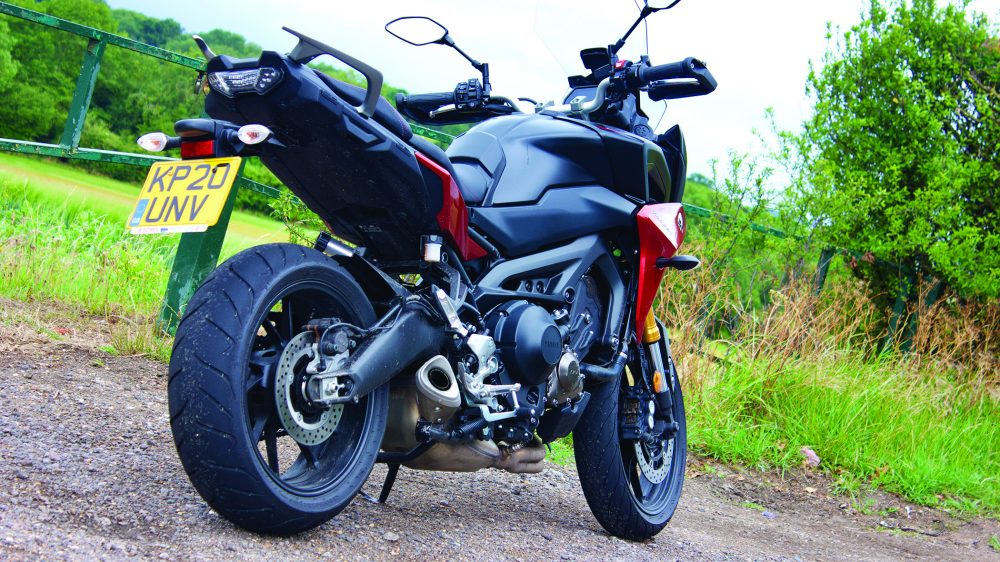 First impressions of the GT-variant Tracer 900 are good. Four-piston radial brakes on adjustable upside-down forks? Check. Smart half-fairing with adjustable windshield and standard-fit handguards? Check. Integrated scaffolding-free lockable panniers with optional top box? Check. Cruise control, TFT instruments, LED headlights, reasonably large fuel tank and surprisingly frugal engine? Check. While 200 miles per tank is nothing to write home about in my book, it’s still welcome in a world where manufacturers are increasingly using theoretical incremental gains in fuel economy to justify smaller and smaller fuel tanks. Heck, you even get a centre-stand, something many other bikes don’t even support, never mind fit as standard.

There are, of course, also a few disappointments right off the bat. While the design is, in my eyes, a significant improvement over the ugly original, there are still a lot of untidily routed and exposed cables and hoses. Unlike the V-Strom 1050, the mudguard is too short to do any useful work. And despite this being a top-of-the-range flagship model in 2020, Yamaha still ask you to pay extra for indicators that don’t rely on super-heated wire filaments for illumination.

Some of the plastics seem a little flimsy, some of the decals look a bit cheap, and after experiencing BMW’s beautifully animated and easy-to-use TFT dashboard, Yamaha’s version looks functional at best. Brake hoses are cheap-looking rubber as opposed to braided steel, and the clutch lever is non-adjustable – something I’d expect to find on a 125cc learner bike, not a premium Sports-Tourer. Features aside, the Tracer can’t quite shake its budget-bike roots. This is a problem when the GT model now costs more than £11,000.

Pulling out into traffic, the riding dynamics of the Tracer don’t immediately impress either. When cold, throtte response is decidedly fluffy at lower rev ranges, and experimenting with the three throttle modes only seems to make things worse. Fixed in the lower of its two adjustable positions the seat seems to tip you forward into the tank, and even at its closest position, the brake lever is a bit of a stretch for small hands. The suspension seems fussy, never quite settling itself, as though the forks and swingarm are rubber-mounted to the frame. In reality, it’s likely that double-rate springs have been used in the forks, a common tactic in cheaper mass-produced units.

Once out of town and with the engine up to temperature, matters begin to improve. As familiarity with the light and sensitive throttle grows, so does the confidence to exploit more of the vast swathes of usable torque the three-cylinder configuration offers. Seemingly happy at any speed in any gear, choosing a different ratio merely changes how responsive the engine is to your throttle inputs. It sounds fantastic too, a rare feat on a standard exhaust system these days. 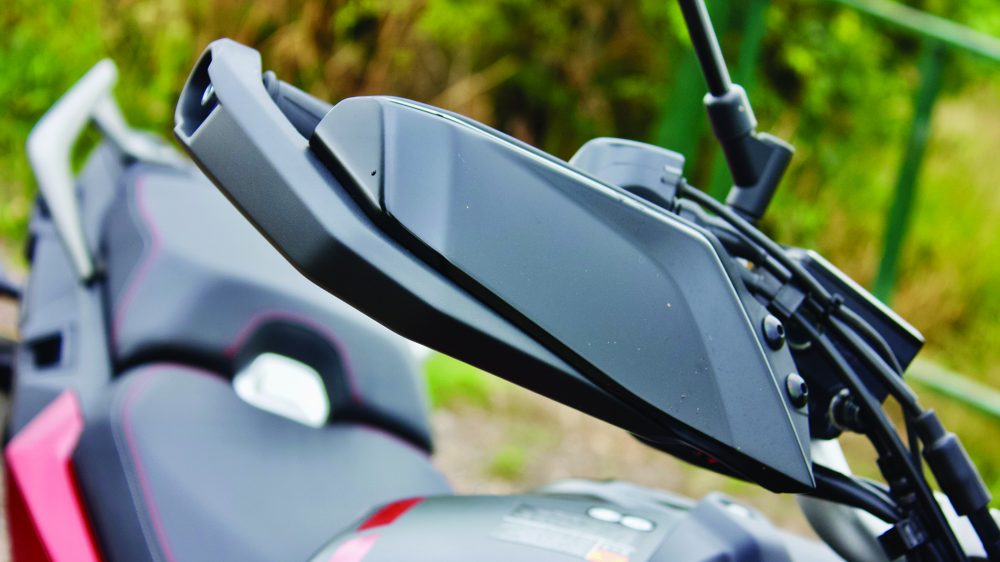 Handguards look small, but seem to be effective at deflecting wind and rain. 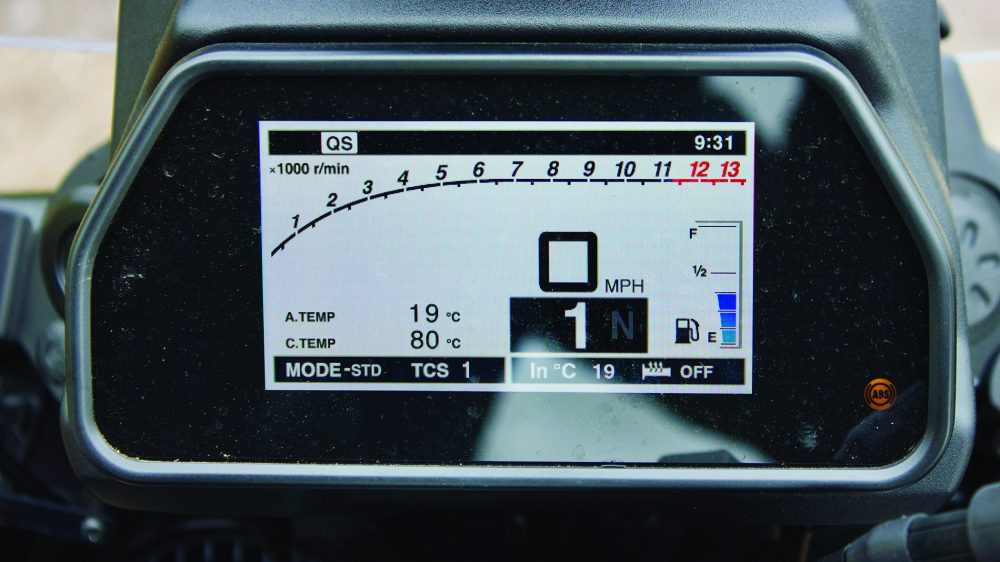 TFT dashboard is functional, but is beginning to look long in the tooth.

Front brakes work well, with plenty of power if not necessarily the instant bite I personally prefer, but further into the stroke the forks harden considerably causing the front wheel to chatter along the road surface and robbing you of any confidence during high-speed late-braking manoeuvres. Your mileage may vary along with your bodyweight, but once again we are reminded that motorcycle suspension will always be a one-size-doesn’t-fit-anybody affair. But while as a new owner my first stop would likely once again be MCT Suspension for a complete overhaul, once you start to turn the wick up it’s clear that the underlying chassis is excellent and the bike really starts to shine.

The riding position begins to feel much more Supermoto than Adventure-Tourer; you feel like you are sat much closer to the front wheel than on e.g. a V-Strom. I always believed that larger 19” wheels conferred an advantage on bumpy Northamptonshire B-roads, but Yamaha has clearly demonstrated that they can handle rutted surfaces just fine with the smaller, and therefore more accurate 17” wheel. There’s a sense of playfulness that other, similar bikes simply can’t match, helped of course by the class-leading 214kg wet weight. A modern frame and modern engine mean a 30kg mass advantage over many competitors, and the results are immediately apparent in how quickly the bike gains and loses speed.

It’s also a likely factor in how long the Tracer 900 can make its 18 litre petrol tank last. In mixed riding, the trip            computer reported that I’d managed 56mpg (UK), something that Fuelly.com confirms is a realistic and achievable real-world average. Take it easy, and pushing past 60mpg (UK) should be possible, a remarkable feat for a bike that, in the right gear, can build speed with deceptive and frightening ease. More than once I found my grumbling about brakes or suspension tempered when I glanced at the speedometer and found that I had wildly underestimated my rate of progress. 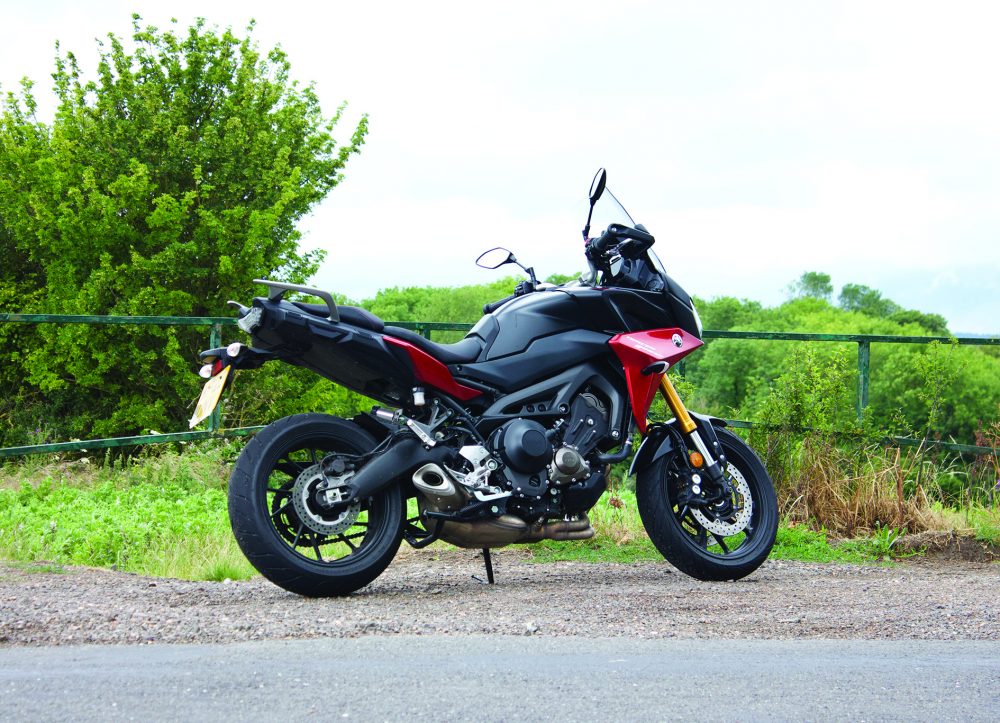 And you know what, I was having fun. It was hot, muggy, occasionally raining hard, and I was threading an unfamiliar bike along unfamiliar roads, and I was thoroughly enjoying myself. Yes, the stock suspension is far from perfect and would definitely benefit from the significant and expensive attentions of a specialist, but the potential is clearly there for this to be an exceptional multi-purpose motorcycle. And yes, the windshield, even in its highest position, is far too short for me, but ducking down just a little resulted in a bubble of silence with rain streaming off my visor. Clearly, a slightly taller windshield would do the trick, but it’s not something I would be enthusiastic about spending money on given the motorcycle’s stated touring intentions.

Furthermore, the cruise control refused to engage in 30mph zones, a maddening oversight given the obvious licence-preserving benefit, and the right-side pillion footpeg can catch on your boot if you ride on the balls of your feet. 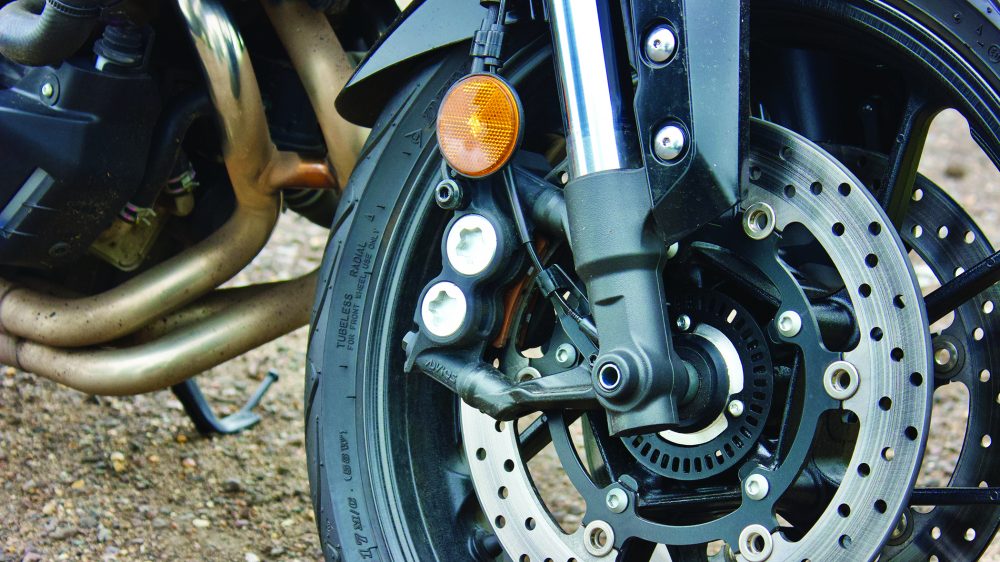 Four-pot calipers are fine, but let down somewhat by the front forks under hard braking.

The minor annoyances continue with unintuitive on-screen menus, and the clickable scroll-wheel on the right-hand control cluster is stiff and awkward to use. Your left boot will catch on the footpeg when trying to lower the sidestand, and the up-only quickshifter is clunky at anything other than high-rev, high-throttle applications. The fuel gauge won’t tell you anything useful until after you have less than half a tank remaining, and activating or adjusting the heated grips can only be done by navigating into a submenu. It’s all a little bit…unrefined. Unfinished. And like Suzuki’s V-Strom 1050XT, at this price point the Tracer 900 GT is picking fights with Triumph Tiger 900s, BMW F900XRs, and Ducati Multistrada 950s – all bikes with more brand cache and decidedly more premium user experience. 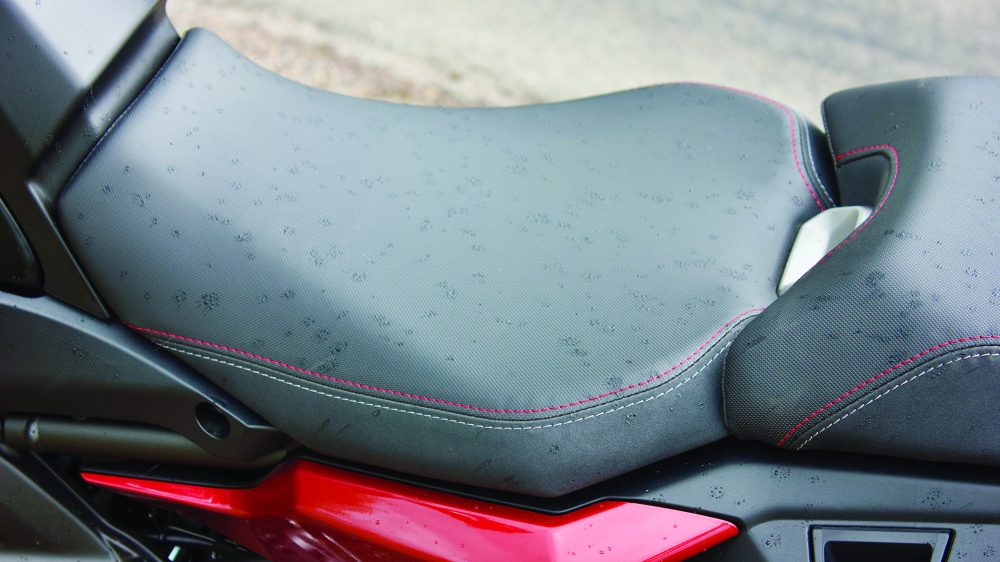 Seat is two-position adjustable and both gel and heated alternatives are available.

Of course, buying European carries its own perils, not least of which are the cost and frequency of servicing. With valve clearance checks not due until 24,000 miles, the Tracer 900 costs just 6p per mile to maintain, and Yamaha regularly tops the reliability surveys that the likes of BMW and KTM sink to the bottom of. The Tracer is also noticeably lighter than anything in its class, a side benefit, perhaps, of dispensing with any off-road pretensions. 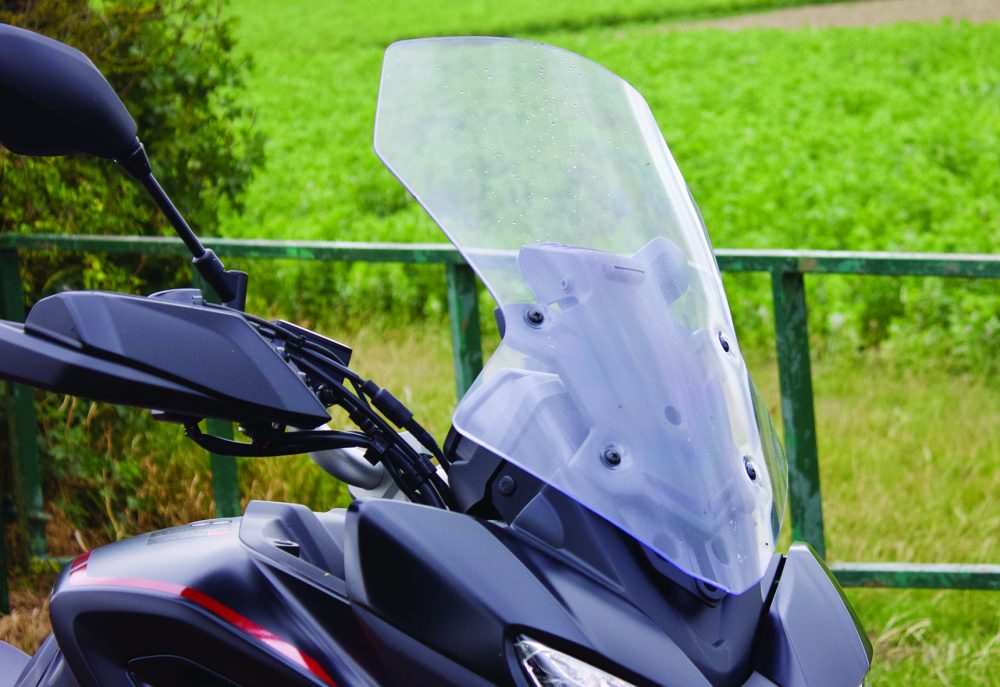 Windshield is adjustable while riding and well designed, but about 10cm too short. 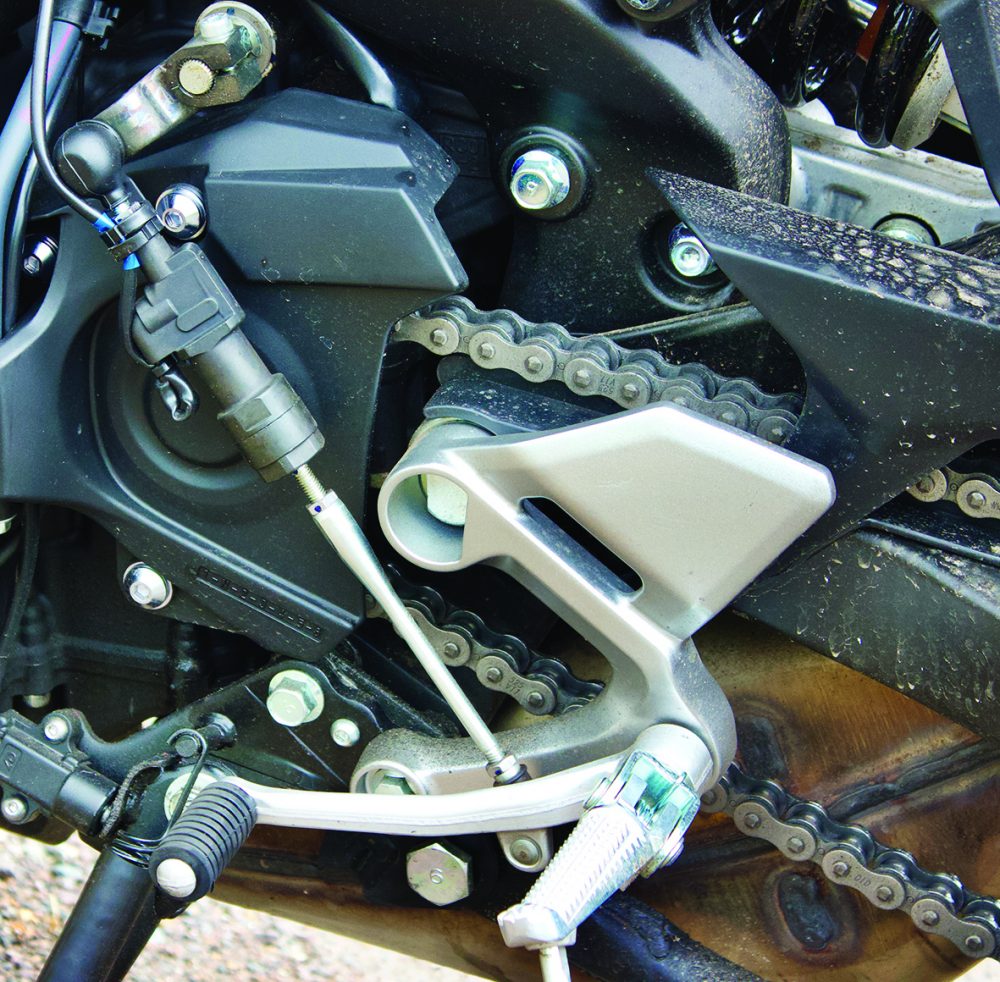 Quickshifter only works going up the gears and is awfully exposed in this application.

As such, the Tracer 900 GT definitely makes my shortlist, in a way that I’m not sure the heavier, more expensive, and less exciting V-Strom 1050XT does. I’m still going to be sampling more of the competition first and may yet be swayed by the Moto-Guzzi V85’s charismatic air-cooled engine and shaft drive, or Triumph’s genuinely impressive build quality and uniquely-configured three-cylinder engine. As always, I’ll have to weigh up the pros and cons and may still decide that the Tracer 900 GT is the best choice for me, even with all its minor faults. So I can only recommend that you do the same and make up your own mind before handing over your credit card.