Triumph to BMW – What was I thinking?

I have been riding Triumph Tigers of various descriptions for 25 years. I have covered many thousands of miles on my various Tigers, and every time I have changed, I have used the opportunity to try other similar bikes and to be happy in my own mind that I was still happy with my choice of ride. I also had a very good relationship with Bulldog Triumph and their chief mechanic, Chris Powers, who has been looking after my Tigers for all that time. 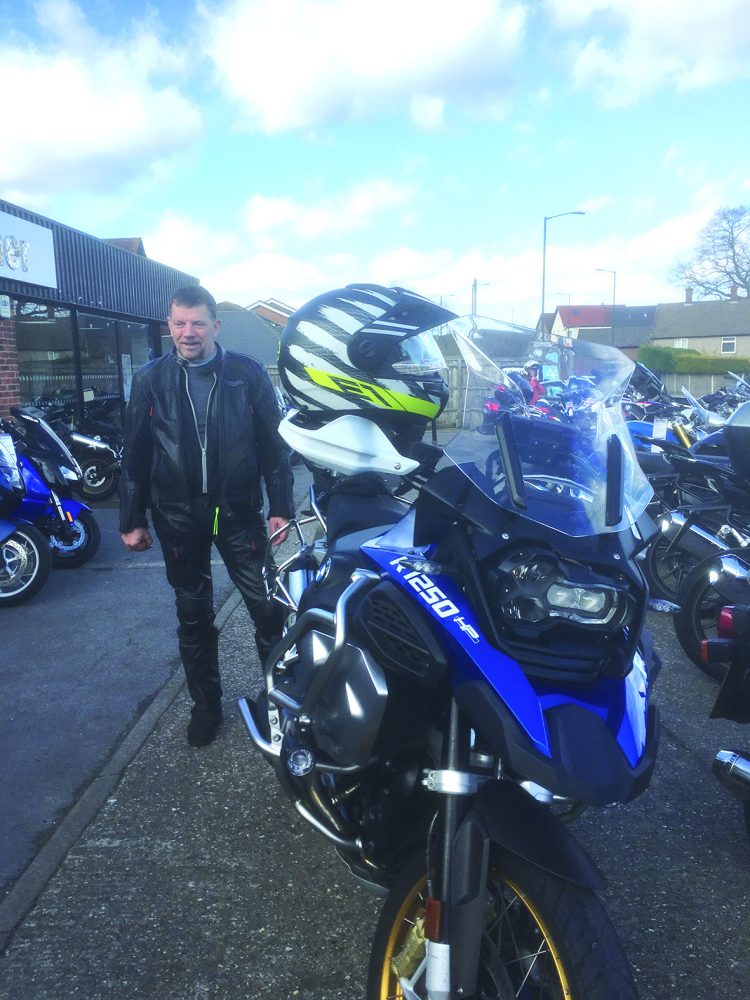 So now I have switched to an R1250GS Adventure. For a start, my last two Tigers were Explorers and they are really nice bikes, and plenty powerful enough, handle well, brakes are ok, and good fun solo, but a bit top heavy with a pillion on board. So I have a new girlfriend who likes riding pillion, therefore my new ride had to be more pillion friendly. I tried the new Tiger 1200 which didn’t feel a great deal different to the older Explorer. Yes it had a fancy digital display, better brakes, semi-active suspension and a reworked version of that lovely triple engine, but it still felt the same.

I then tried the new R1250GS Adventure. That also has a fancy digital display, active suspension, a reworked engine, brilliant brakes etc. etc., but it feels very different to the Tiger. The biggest difference is the weight. Yes, on paper, with a full tank of fuel (30+ litres) it is physically heavier than the Tiger (which is now lighter than the Explorer), but it doesn’t feel it. Not even pushing it around. Riding the BMW, it feels even more balanced, especially with my girlfriend on board.

It also has that wonderful tele lever front suspension, and linked brakes that I really like, and a better mounting for the GPS (the new Tiger has the mount on the handle bars which precludes the use of a tank bag).

So I bought one.

I have now done 1500 miles in all conditions, and do I still think I made the right move?

The BMW is a very comfortable bike to ride, very comfortable for my pillion as well. It is more economical than I was expecting, the suspension is brilliant, and the gearbox is very smooth (much better than the BMW’s of old.  I haven’t felt the need to change too much other than fit a taller screen. The Triumph engine is more exciting and doesn’t shake you from side to side, but the 1250 engine on the GS is more exciting than that on the 1200 – it has those few extra ponies in there.

I am not sure that there is much in it from the rider information. The Triumph display is adjustable, and you can change the display.  It is also getting connectivity like that on the BMW (but hasn’t been released yet), and the Triumph’s illuminated switchgear is neat, and an electric screen which is probably a bit of a gimmick (the BMW’s adjustable screen can be easily controlled on the move, by hand).

The only big downside of the BMW that I can see at the moment is the reduced service intervals (6,000 mile to Triumph’s 20,000) and that the dealer isn’t quite as close Bulldog.

As the world focuses on COP26, we now have two member-led initiatives to help Club members offset the carbon footprint […]

There are a lot of motorcycles that, on paper, look perfect. Ride enough bikes and apply a little critical thinking […]

Science of Being Seen – Part 6

Looked but FAILED TO SEE! Last time out I began explaining how in around one-third of all collisions, the bike […]