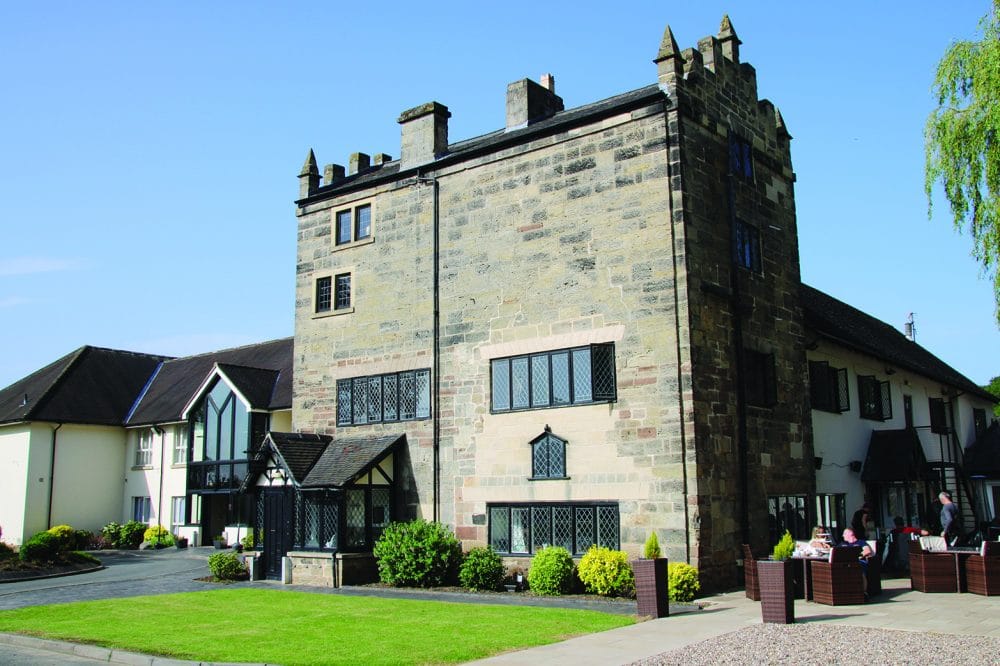 A trip to the Norton factory meant arriving early at Beaconsfield Services for a full English – Norton’s surely nothing if not the full English? Park up, wander in, burgers, sushi and chicken galore; but egg, bacon, black pud and the rest, in grease with a crisp fried slice? No chance – unless the well-hidden ‘spoons could provide, but by the time I’d spotted it I’d plumped for a McBacon bap. Looked good, but a bit pricey and didn’t quite hit the spot.

There must have been 10 of us there by 8.15am and already it was warm. As we scoffed, more turned up, amongst them run leader Phil Donovan. Troughing complete he gave us a briefing and new TVAM run arm-bands, complete with insert for my ICE contact details (my brother, who’d kill me if he got the call), phone PIN code and little else – who knows their blood type and would the medics trust what was scribbled there anyway? Then it was just a question of herding some 20 bikers into a shape suitable for the ride to Castle Donington, a tricky exercise made all the more so by Phil instructing us to form a line along the Costa car park then vanishing. Once we’d worked out it must be the Starbucks car park things sped up and I doubt we waited more than 10 minutes before Phil swooped past and led us on our way.

A fair old way it was too, and on a Friday not exactly traffic free. Phil had sorted a good route with a fine selection of A’s and B’s, no motorways and a couple of comfort breaks. First of which was the Super Sausage café, where there was no time for their splendid looking full English, though Robin, who met us there on his venerable Falco (he’s adopted a Trigger’s Broom maintenance regime) had had time to indulge. Then to a converted barn for (mostly, ahem) pre-booked lunches, followed by more herding to get us away in good time for factory arrival by 2.30pm. 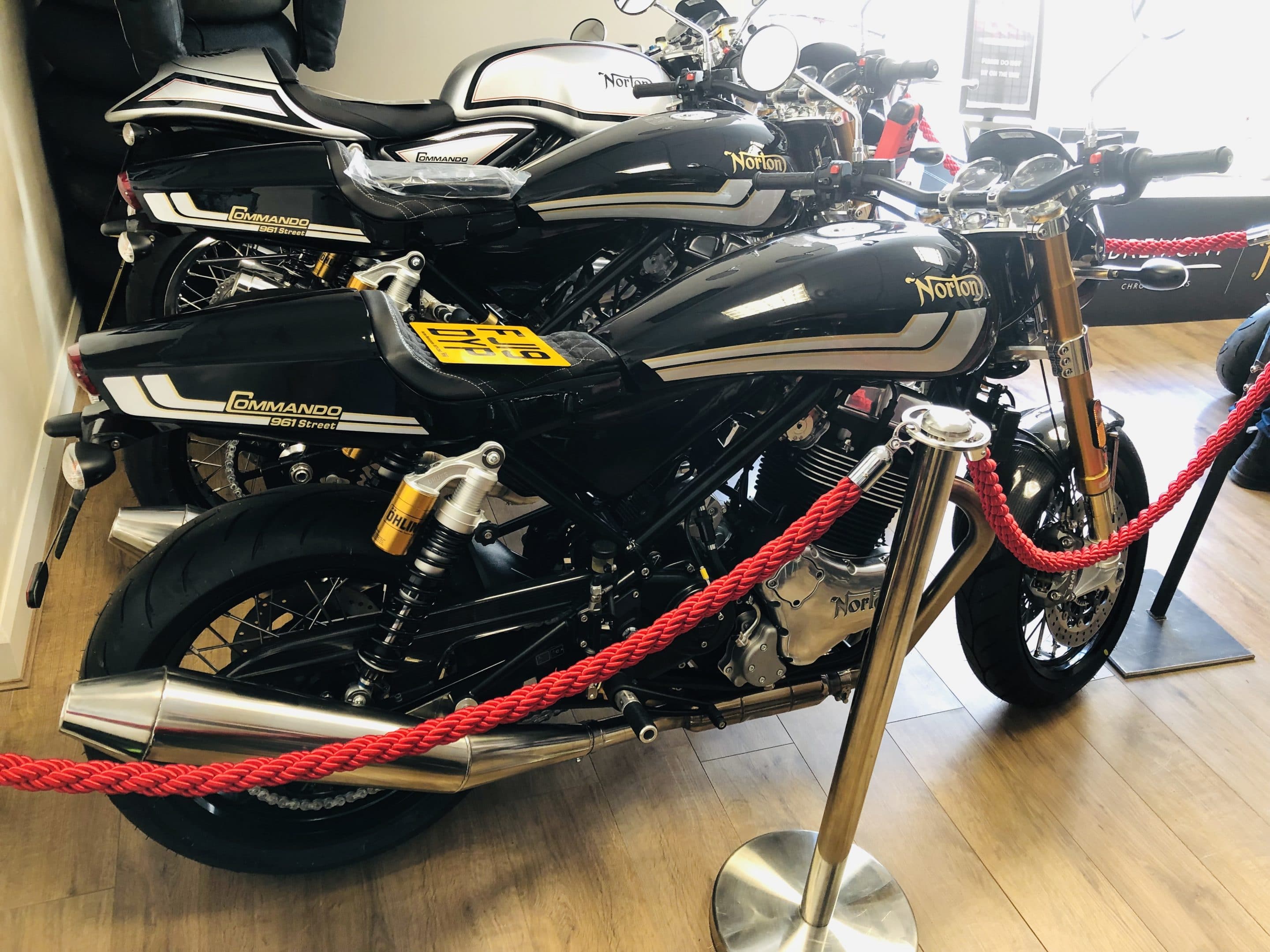 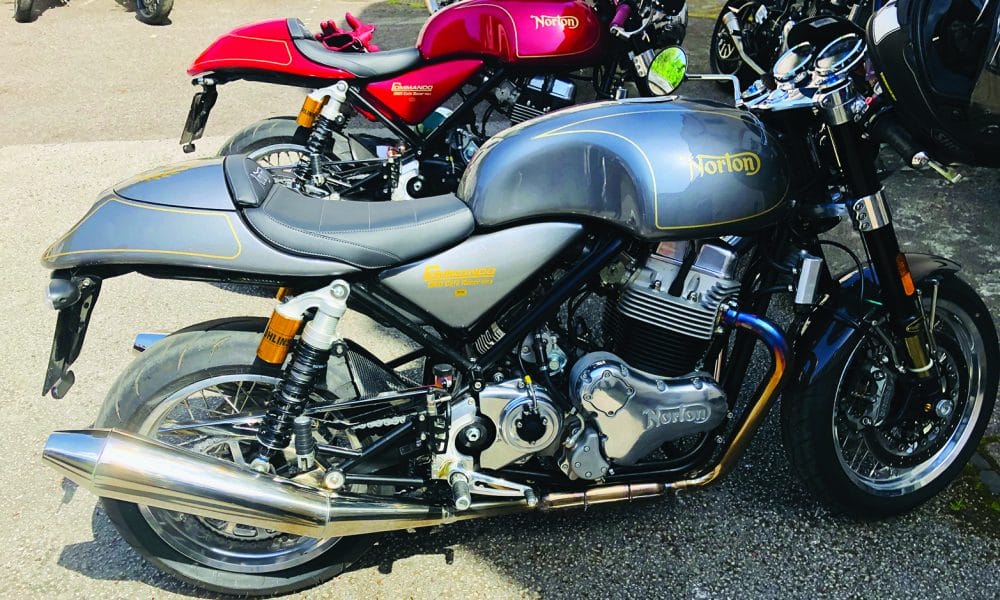 As the afternoon progressed the traffic did the opposite and overtake hunting became necessary and frequent, as did queuing at lights and junctions. All of which, plus more time than expected waiting with Phil for markers, started to threaten our ETA. I’m not that well up on TVAM ride etiquette but couldn’t help thinking that watching the rider in front ignoring overtakes you’d take is less helpful than being waved past and getting a move on. And queuing two abreast to pull away in pairs would be a good way to keep the group moving along apace. Bikes toppling at fuel stops rather holds things up too… But we didn’t get lost and made there it intact just in time for the 3pm tour – bravo the marker system!

Parked up we walked down the drive to the magnificent Regency pile that is the Norton factory, through a tastefully manicured country park under the gaze of a very glossy and languid-looking peacock. Directed by friendly staff to the showroom we were signed in and given permission to drool – close up the bikes look very, very tasty indeed; poised, purposeful and beautifully presented.

Dragged from the showroom by our two guides, first up was a stroll through the grounds to the fabrication unit for an entertaining chat and the opportunity to get our hands on some bits. Blimey they take their time building stuff. First a tank, brushed alloy and achingly pretty but at least three full days to hand bash, weld and polish (which was why we only got to handle a previously dropped and cross-sectioned example). A clutch cover, milled from billet with ‘Norton’ proudly hewn into it – strewth, that’s heavy, no wonder the 961 engine is such a lump. A polished alloy single-sided swingarm, a thing of beauty and no little weight either. A front fairing spider (the intricate assembly of narrow alloy tubes connecting fairing to frame), all hand welded and polished too; OK, starting to see why these bikes cost so much. Robotic assembly would work much better for that job, as it would for the pipe bending – apparently there’s a guy who just does that, all day. 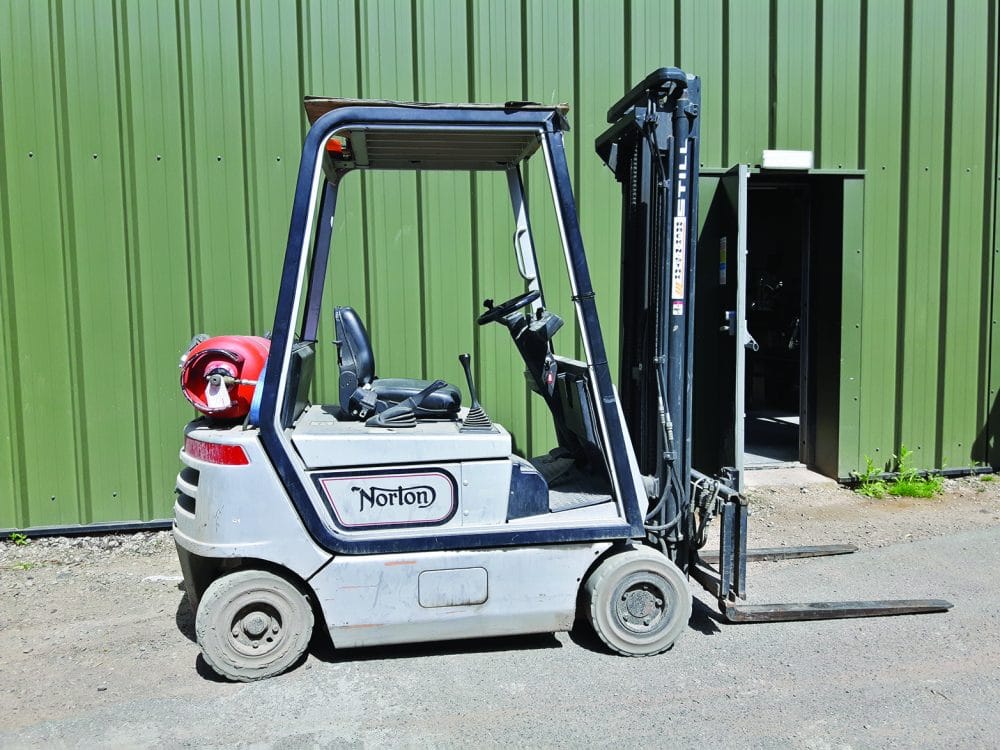 The scope to customise is truly astonishing…

Next up it’s the factory itself. Disappointingly we weren’t allowed to view engines being built as ‘that happens on the first floor’. Eh? What we could see was less factory more open-plan office, desks and chairs replaced by ramps, stands, tool chests and, yes, bikes. At one end an ancient belt drive Norton, scattered around the floor a mostly touch-accessible selection of newer machinery, including very handsome V4’s, one of which was started for us, oh wow! Plus 961 and Atlas variants alongside ex-race bikes in glorious, unwashed, post-TT condition. All fantastic looking, though no photos allowed and a ‘development’ section I was chased out of!

Each bike is hand built by two mechanics in its own bay to the specification of the buyer whose details are included on the build sheets. Virtually unlimited buyer bespoking is available and encouraged, the parts department picking the bits, all double-checked by the mechanics as they bolt them together over a couple of days. Apparently Euro 4 compliance means there’s not a huge variation for different markets which must simplify things a lot.

Beautiful bikes all, but the 961’s have pushrod operated valves, make about 80bhp and cost somewhere around £15,000. The new 650cc Atlas motor is more up to date with overhead cams and, err, that’s about it. The Ranger version’s a stylish-looking twin, sporting hipster vibes and off-road pretensions (hard to see how a vertical gear linkage half the height of the bike could survive a close encounter with anything solid), a tad more power than the 961 and cheaper too – though still north of £11,000. But fancy triple figure horsepower and a pose quotient to die for? That’ll be the 200bhp V4 SS then, a snip at £44,000. Gulp…

Great trip and pleased I went (well done again to Phil for making it happen), the bikes are gorgeous, but their price clearly pertains more to the craftsmanship than its practical upshot. When the owner of Rolex was asked about the state of the watch market he said he had no idea as Rolex wasn’t in the watch market: something similar’s going on here. I’d love to own one, but, given my dining room feels a more appropriate place to keep it than my garage, I can’t help feeling their peacock best sums up Norton for me. Though I suspect that, were I to win the lottery, the McBacon bap would run it close.

In 2009, Yamaha broke from accepted form by equipping their range-topping litre bike with a cross-plane crank, delivering the sound […]

Death of the “Counterpart Driving Licence”

What’s happening? The paper part (headed Counterpart Driving Licence, D740) of your 2-part licence ceases to have any legal meaning […]