About a year ago a few biker friends and I were kicking around ideas for a European tour for 2019. My mates had done a few before, such as the MotoGPs at Assen, Catalunya and Misano. I started riding again in 2015 after a long break and had never done a ‘proper’ continental tour. We had toured the Lake District, Wales, the 2018 Isle of Man TT, the 2019 NW200 as a group, but I’d not tried riding on the ‘wrong’ side of the road yet, or on proper mountain roads (no offence to Wales!) For the 2019 tour, 5 of us settled on the Aragon MotoGP (myself, Rod, Stephen, Leigh and Paul). I had passed my advance test with TVAM in June 2019 but my friends are not advanced riders.

The first major ride on 17th September was getting to the ferry bound for Santander. We are all local to Portsmouth (1 hour away) but the ferry company made a late change to depart from Plymouth instead. Undeterred, I planned a reasonably scenic route, away from most motorways, for 3 of us riding down together which also gave me the chance to programme my new Garmin SatNav with waypoints. This all worked well until we couldn’t find somewhere to park and eat lunch in Dorchester. We eventually found a Morrison’s a few miles further on.

The tricky part came when we returned to the bikes and realised we were tight for time in catching the ferry, with nearly 100 miles to go and less than two hours ‘til last check-in. I pushed the pace on my ZZR1400 to make sure we didn’t suffer that embarrassment.

We met companion number 4 on the ferry. He had picked up a hired Africa Twin for the trip, after we persuaded him that taking his recently-restored 40-year-old Laverda might give rise to breakdowns and small amounts of mechanical chaos/oily puddles each morning.

I had placed a sticker on my right-hand mirror to remind me which lane to be in when I got to Spain. I emerged from Plymouth Sainsbury’s petrol station towards oncoming traffic. Not my finest hour.

After a merry evening over a few drinks on the ferry plus a bit of Croque Monsieur and Paella action, we had two cabins to try and get a good night’s sleep before the first full day’s riding in Spain.

Paul, the 5th and final member of the team, was waiting for us at Santander Port, having ridden 200+ miles from his UK home to Paris for a meeting, then a further 650 miles from Paris to Santander. Paul could have bailed out when work got in the way, but he was crazy enough to stick with the tour. What a lad! (And serves you right for retiring and then going back to work.) 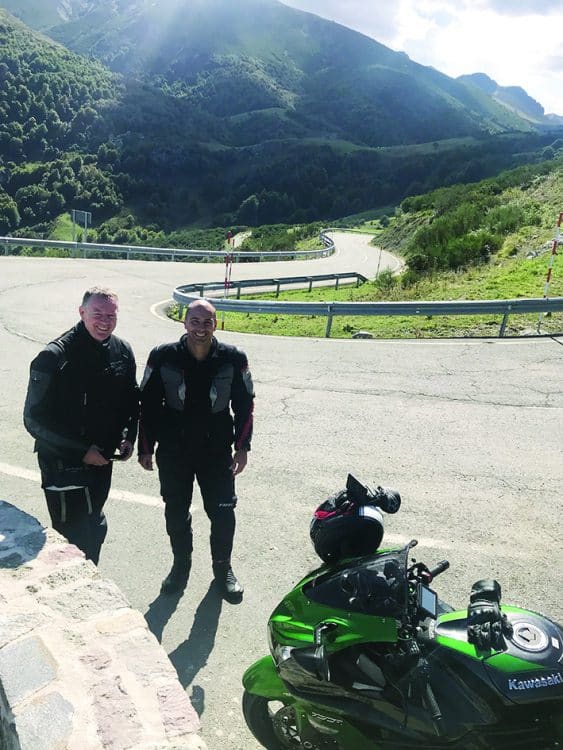 Can’t stop smiling. What a road!

I led the group to the first hotel about 90 miles from the Santander ferry port. About 3 miles from the hotel, SatNav directed me off the motorway onto a much smaller road and about a mile later, diverted me back onto the motorway. WTF? Rod (who doesn’t have a SatNav) said “What was the point of coming off the motorway? It was a waste of time!” I was tired and stressed and replied, “I was following the SatNav, and I don’t f***ing live around here!”

The following few days involved a pattern of breakfast; checkout; load up the bikes and ride for a few hours; stop somewhere for lunch; then ride again until getting to the next hotel. Parking was often a challenge but once found we decanted the bikes; checked-in, showed (bliss); changed and headed out to dinner.

What wasn’t a blur of routine was just how fantastic the roads were. The tarmac surfaces felt like riding on a racetrack; there were very few cars; and the scenery was exquisite. Some of the rides were so good that we would stop for photos and rabbit on about certain bends or stretches of road. One mountain section was so damn good that when we got to the top we agreed to ride back down so we could do it all again.

Riding that big ZZR was quite a challenge for me on mountain descents where the mass and momentum was very different to riding my Aprilia Tuono Factory. Fully laden with a big chuffer like me on it, the ZZR weighed in at close to 900lb (or nearly 400 kilos). I had a purple patch where I followed the 2 BMWs in our group up a mountain pass and stayed with them for 15 minutes or so. It was exhilarating, but then it hit me when we found a short straight that I was exhausted from the concentration, the speedy smoothness over what might have been 100’s corners and the physical effort of leaning the bike left and right, over and over. But what an unforgettable 15 minutes that was! 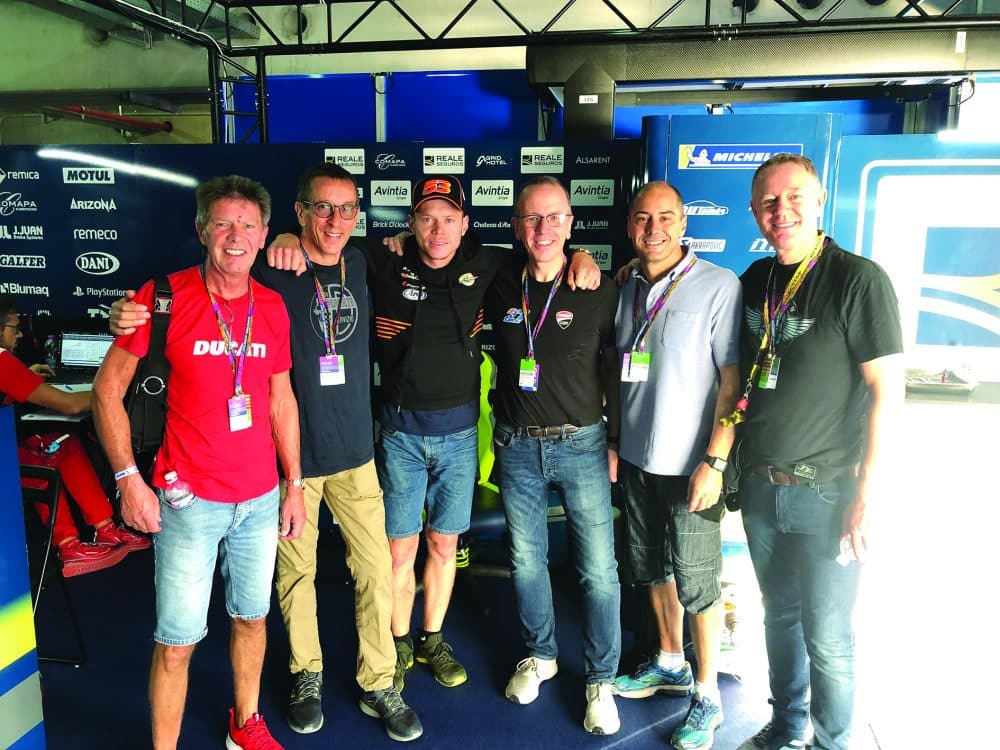 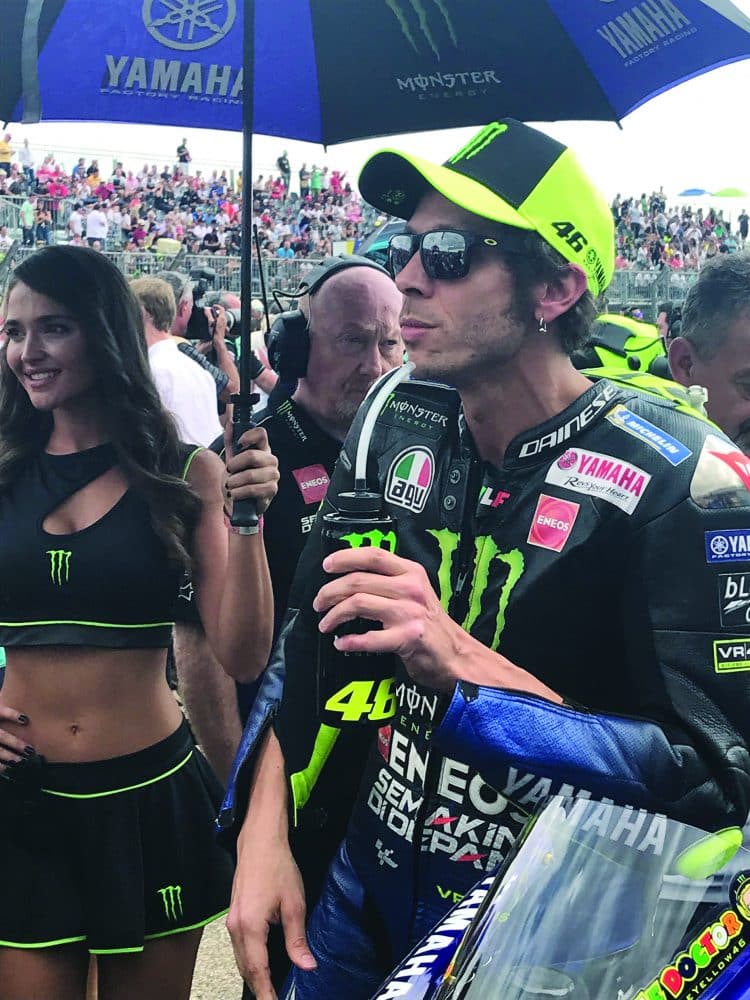 The Doctor looking cool on the grid-walk.

For race day, we rode for 2 hours in pitch black and rainy conditions, arriving at the Motorland Aragon circuit at 8:00am. We met with our host, Rubén Xaus (a retired racer nicknamed ‘Spider-Man’). He took us into the Avintia garage to meet the riders, Tito Rabat and Karel Abraham, take a look at the bikes and see what happens in the garage with bike set-ups, tyres, brakes etc. The personal highlight was two of us were given MotoGP Grid Walk passes. Being five grown-ups, we decided on who got the passes by playing, ‘Rock, paper, scissors’

I’m not easily starstruck but standing next to my hero Valentino Rossi as he got ready to race was just the best thing. Seeing all those familiar riders such as Marquez, Dovioso, Crutchlow, Rins, Vinales etc. was just brilliant. The brolly girls were beautiful but I did ask a couple to move a bit so I could get the entire bike and rider in shot (what a geek!). I walked so far down the grid I even spotted Jorge Lorenzo. Sorry, that was cruel! 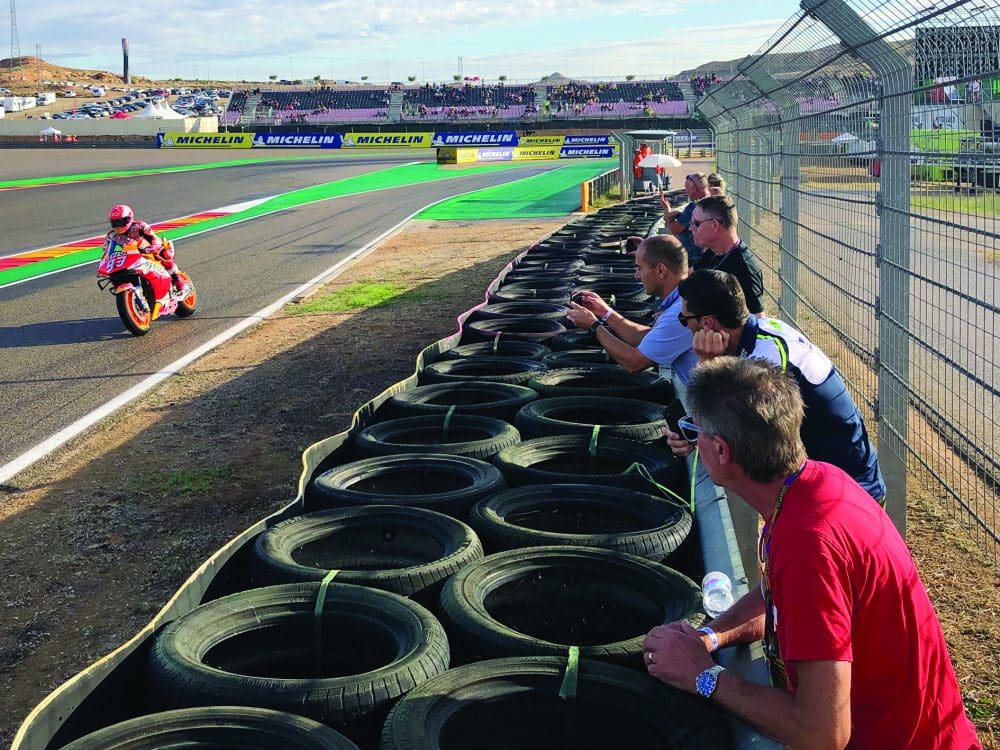 At this point I want to say a massive thank you to my mate Paul who organised the race day VIP experience. I won’t forget it and neither will my mates. He also planned all the routes and booked the hotels. He and Stephen were the day-to-day route gurus when the SatNavs wouldn’t play ball all the time.

The ride back to Bilbao for the ferry home to Portsmouth was the only part where we missed a great set of roads. From Pamplona to Bilbao, the guys knew a lovely mountain road, only we never found it and ended up on some big A roads instead. After a cracking dinner in Bilbao, we knew that the tour was effectively over.

The next 24 hours was spent on the ferry to Portsmouth and a parting of ways, where we were already preoccupied with leaving in 5 directions. It was raining for the whole hour home, and the roads were clogged with cars and lorries, the road surfaces were poor, and I realised how spoiled we had been with our week on peerless Spanish roads. Hasta luego España! 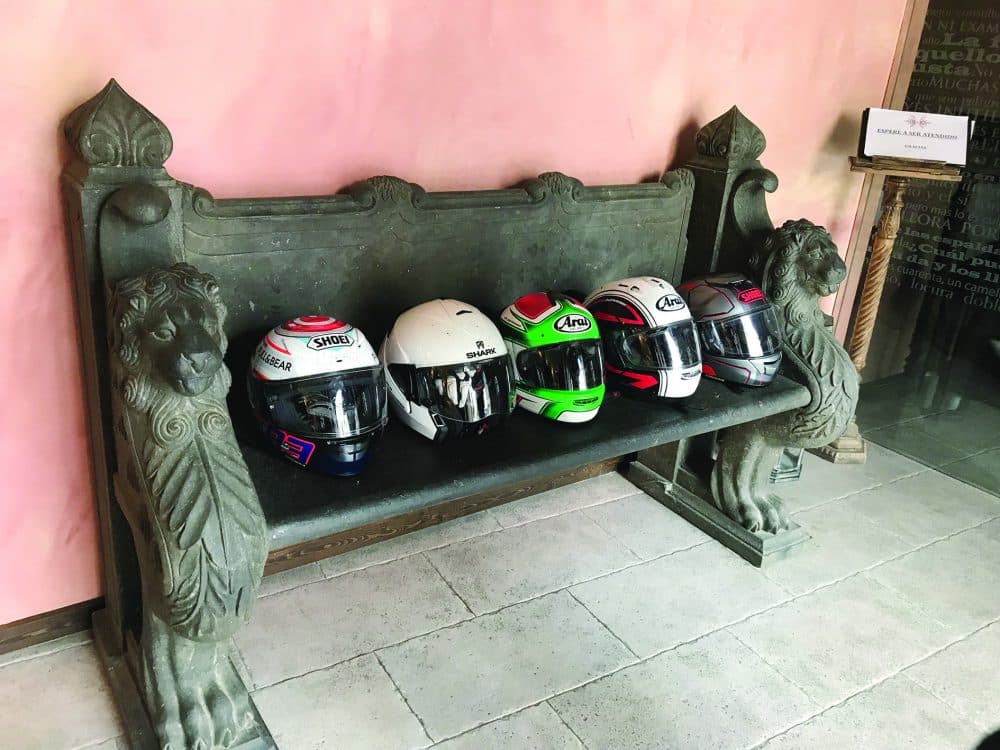 Many flies lost their lives on this trip!

What did I learn from my first continental tour? 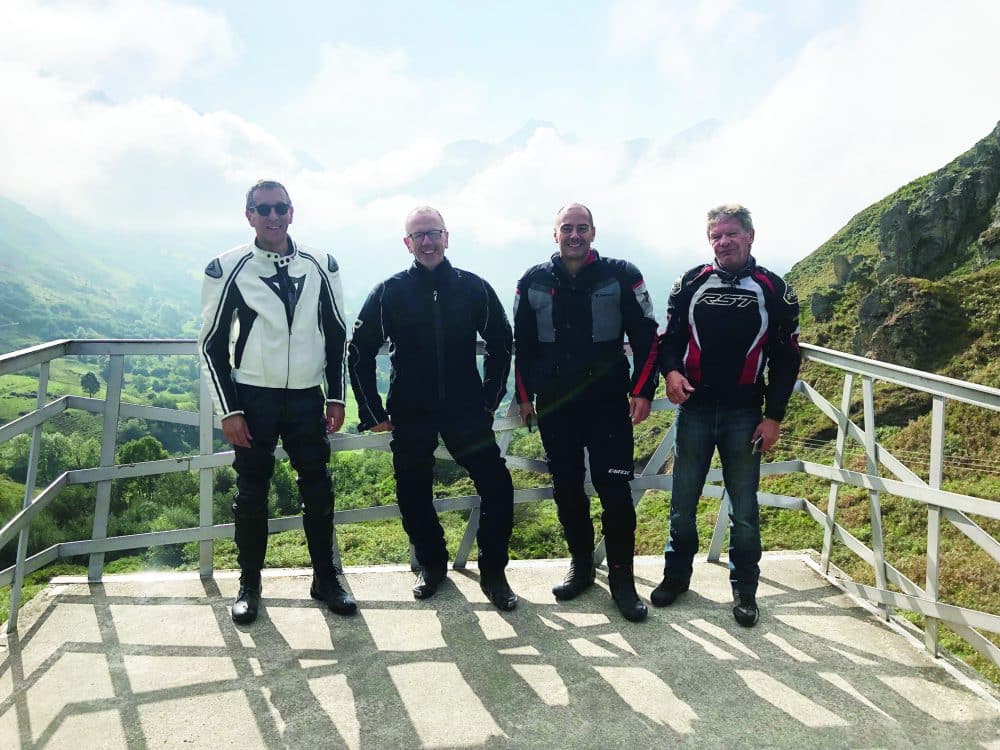 The four bikers of the apocalypse.

What were we riding?

The routes we covered included:

A Grand Day Out

You don’t see many wheelchairs at TVAM. “Thank goodness,” I hear you say. However, there was a very visible one […]