Breakdown Insurance – Are You Covered?

Many of us have breakdown cover to deal with those situations when things don’t go quite as planned. Most of us who ride bikes also know it’s important to ensure your cover includes recovery in case of an accident as, let’s face it, bikes tend to ‘fall over’ more often than cars do.

But imagine riding off to Wales with a mate when, almost exactly halfway through the journey, something unexpected happens. He gets off the bike with severe stomach cramps. Might it be the bacon butty eaten in Oxford before we set out? After a couple of hours it’s getting worse so maybe it’s something a bit more serious than trapped wind. Unable to mount the bike – let alone ride it – the only option is to call an ambulance so he can be assessed by the professionals.

Just 15 minutes after dialling 999 the Ambo turns up with a crew of three (maybe because they heard we were bikers) and, following an assessment of the patient, treatment in hospital is recommended. So, just 30 minutes later, off they go leaving me at the side of the road with two bikes, luggage, and a mate’s RAC recovery card in my hand which is when the ‘fun’ starts.

Having explained the situation to the RAC operator, it turns out they will not attend as the bike hasn’t been in an accident or broken down. Well, they would if we could get a letter or fax from the hospital confirming that the rider has been admitted. Hmm, bit difficult to imagine the NHS having time to produce such a document on a Friday afternoon, and besides, who would you call to get such a document anyway? Helpfully though, the RAC do offer to recover the bike – if we pay them. The cost? £88 plus £2 per mile, and that’s non-refundable even if we do eventually get a letter from the NHS.

So how would other breakdown companies react in this situation? I decided to make a few calls.

They have something called ‘Compassionate Recovery’ where, in these circumstances, they will attend and recover your bike. Depending on the level of cover you have they will even take it to your home or to an address anywhere in the UK that you request.

I asked if, as an AA member, they would have attended in the situation above as they cover the member, not the vehicle. So if you’re travelling in a mate’s car and it breaks down they will attend. Yes, it was confirmed they would have recovered my mate’s bike as I was there as the member and in need of help.

Having chatted online with one of their service agents they confirmed that they would recover your bike if taken ill by the roadside. You’d have to declare yourself ‘medically unfit’ which they would check when they arrived. However being carted off in an ambulance would satisfy them …..

Every new and approved pre-owned BMW gets the manufacturer’s breakdown cover as part of the warranty. In talking to them they confirmed that their breakdown service does not generally cover where the rider becomes incapacitated. They do though have discretion and in the situation I found myself in they would have attended to recover my bike if I was incapacitated, as it’s a BMW, but not my mate’s Honda! As the lady said, ‘We wouldn’t leave a BMW by the side of the road’. However if you drink too much in the pub at lunchtime I think you’re on your own to get home!

So are you covered?

If you became incapacitated by the side of the road, rather than your bike, how would your recovery company react? Would they attend and move your bike to secure storage or even take it home for you? It’s maybe worth phoning them and asking before that next trip, or before you renew.

I certainly won’t be joining the RAC anytime soon.

So what happened to Simon’s bike? Well, a very kind biker stopped in his car having seen the ambulance when they’d gone past earlier. They knew a local garage so went off to see if they would store it for us. Yes they would, so I rode it the mile to the garage whilst his good lady wife stayed on the side of the road with my bike and luggage and then he gave me a lift back.

So the biker community stood together whereas the RAC had failed its member. And you never know, perhaps it’s worth stopping, you may be able to help an unknown biker in distress.

As for Simon? As I write he’s currently sitting up in his hospital bed recovering from his operation. But that’s his story to tell…. 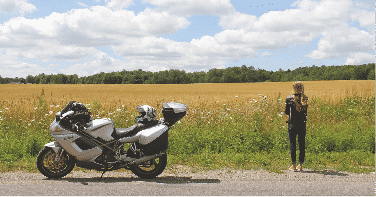 To get a little flavour of what this trip is about, what follows is the story of the September 2008 […]