Who wants to Wander the Wobbly Windies of Wild West Wales?

and how about adding the wet! 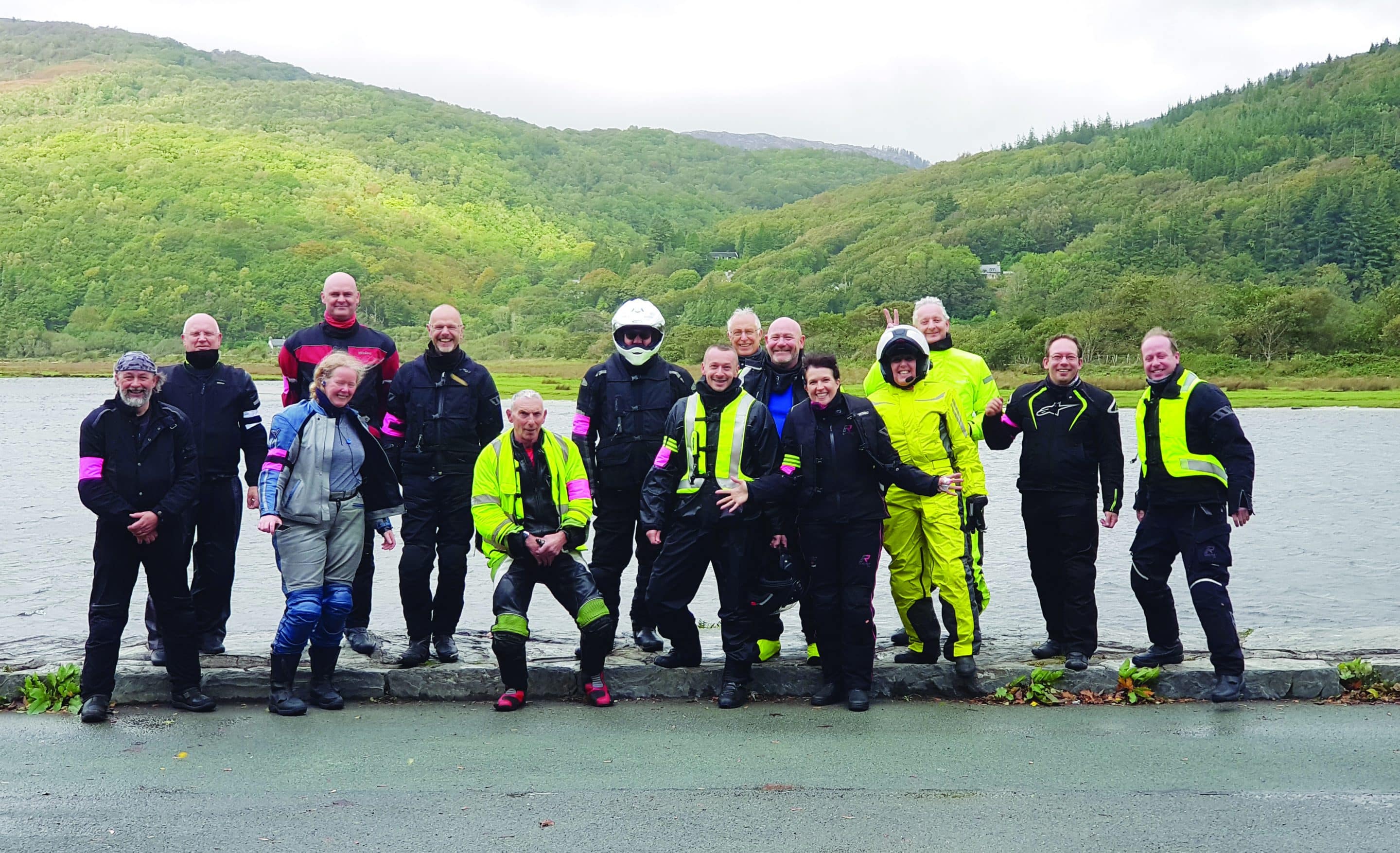 The email arrived announcing the 39th 7Ws, and it was a welcome distraction. Now for the form. The usual stuff, but then questions about run leader and back marking. The simplest solution was just to leave the boxes unticked, but maybe I could go on the course and try back marking, or really push the boat out and do the run leaders course. Why not? I ticked the box.

Weeks pass and September draws even closer, and emails arrive confirm my attendance. Job done, 7Ws booked and paid. A few days pass and I receive an email from Ness. Dear Mark, are you able to take a run from Oxford to the Hotel? I was in the home office staring at the email, pondering on the implications, assessing the request that had just been made. I will think, and decline.

Again a few days passed and the mobile rang. I didn’t know the number, but answered. “Hi Mark, it’s Ness from TVAM.” Five minutes later I was a run leader. I’m still unclear how that happened! I won’t go through the detail of planning, app checking, route checking and google street view virtual trip clicking, but I was concerned. 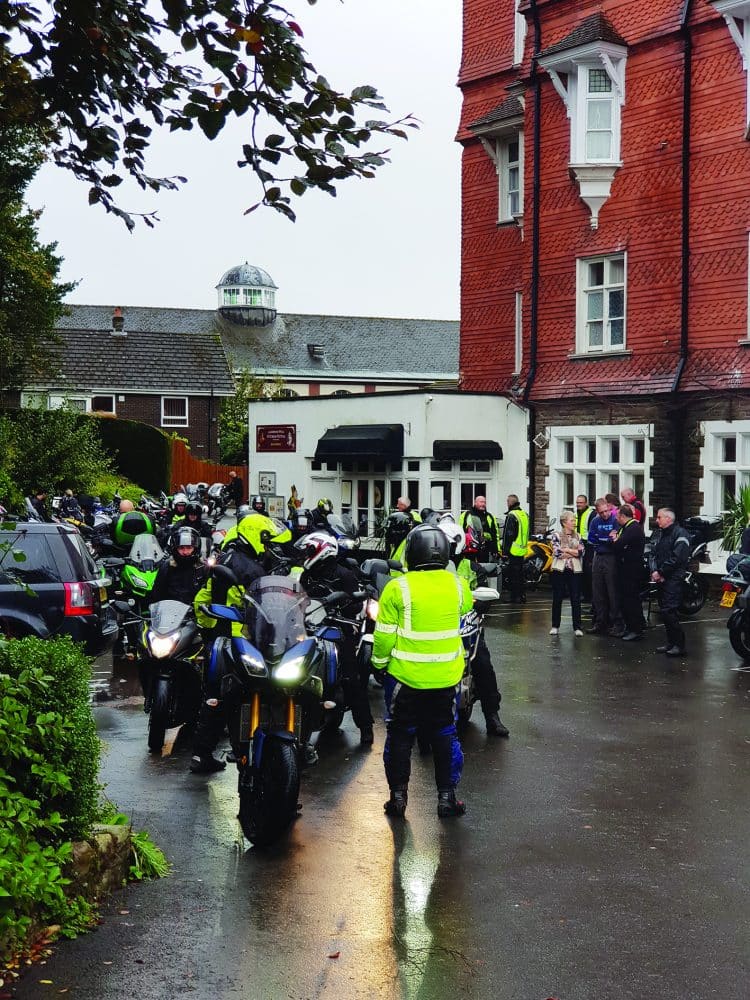 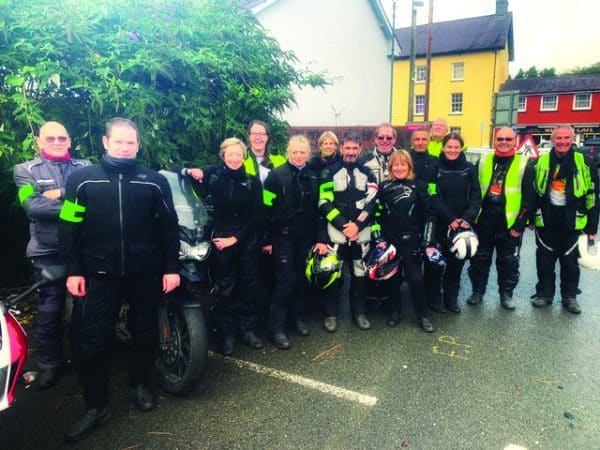 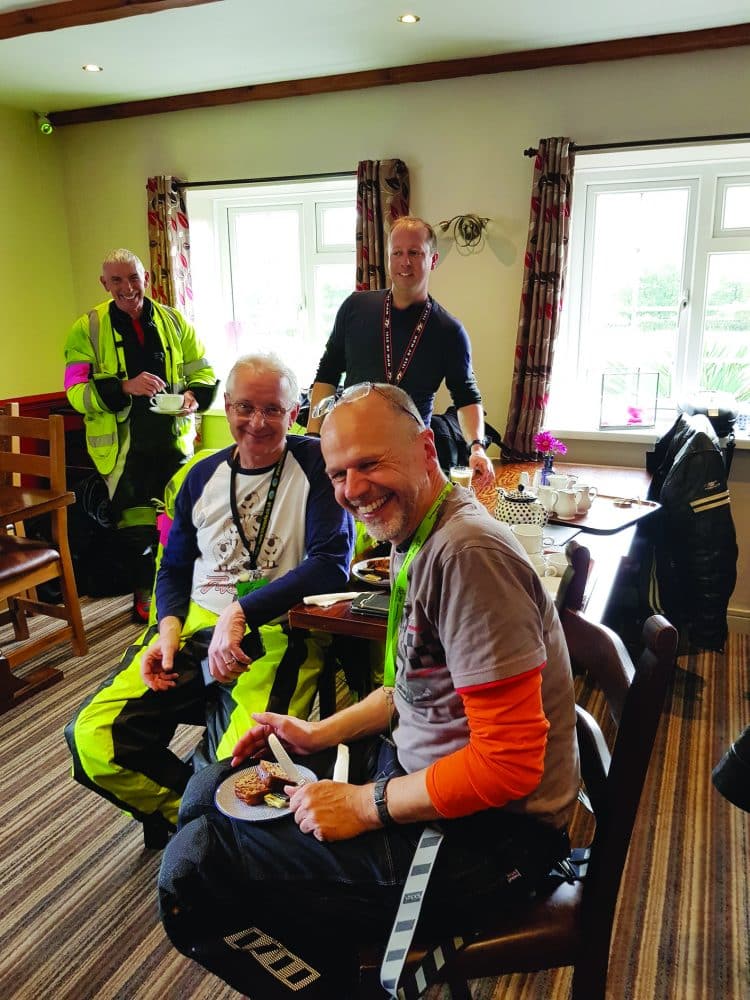 Finally, the big day had arrived, the 39th 7Ws. The pre-ride briefing was given, and I sat wondering what I’d signed up for. I was issued with double white armbands. I was looking official and it went to my head a bit. There were 30 minutes to go, and we were the last group to leave. Just to add to the tension, we were apparently waiting for a pinlock visor to arrive. With 10 minutes to go, I scrambled around making sure route app was working – all dressed and ready to go.

Outside in the car park, as the ‘orange’ run leader it was my turn to speak. Are you all happy? Good to go. I couldn’t say much more, as my briefing notes were on the kitchen table 22 miles away. Fortunately, Ness stepped in and filled in the numerous blanks. All that was left was for me to put on my helmet and get on my bike – which was parked in the ‘pink’ run bay. I put this down to early nerves when parking.

I felt like a flight leader preparing for take-off, seeing the bikes forming up behind me ready for the off.  Lights on, all pointing in my direction all waiting for me to set off. I did so, praying that the navigation app would perform, and it did. Not the usual Garmin or TomTom but a little known app called Kurviger. She started talking to me. “Take the 3rd junction.” A quick glance in the mirror confirmed that I was being followed. Great it’s all working. Now for my very first marker, look, aim and point. A quick glance in the mirror confirmed they had stopped safely.

After a solid 4 minutes and 30 seconds it all looked like it was going to plan; taking the bends, riding smoothly, all good. Then, why am I on the A420? I should have taken the left fork. No one will notice if I just pop down, go around and come back up. It worked a treat, and I was back on track. (Proofers note: To her great amusement the backmarker spotted the run leader on the opposite side of the dual carriageway, heading back in the direction from which we had just come.)

From here on, the journey was almost flawless, with only minor hiccups. My biggest worry seemed to be losing everyone for a few miles. Where have they all gone? I wasn’t going that quickly, surely. But coffee breaks and lunch soon solved that issue.

The roads got better and better, and I shouted “#@$! Yeah” after a particularly exhilarating and progressive ride through the glorious Welsh countryside. Arriving at the hotel some hours later, much to my relief it seems that I had only lost two: one over-enthusiastic rider who overtook me, and one that didn’t turn in to the hotel. To these two poor lost souls, I am sorry.

It was a nerve-racking adventure, and my first attempt at being a run leader. It completely knackered me, as the levels of concentration involved were more than anticipated. It wasn’t just riding, it was the planning for the safety and directions for the group, the riding and in the wet. I really don’t like riding in the wet.

I had dinner and some drinks, and hit the sack. Would I do it again? Absolutely! It was one of the most rewarding things I have ever done, and the feedback I received was overwhelming.  However, with all these things I couldn’t have done it without a fantastic backmarker (big shout out for Kathy Drogemuller) and all the team between us. Without them it could have all gone wrong, so even if I was in the front, it was a team effort. Thanks to everyone on making my first run a success. Of course, a final thank you to Ness who talked me into it and supplied all the help and support I needed. 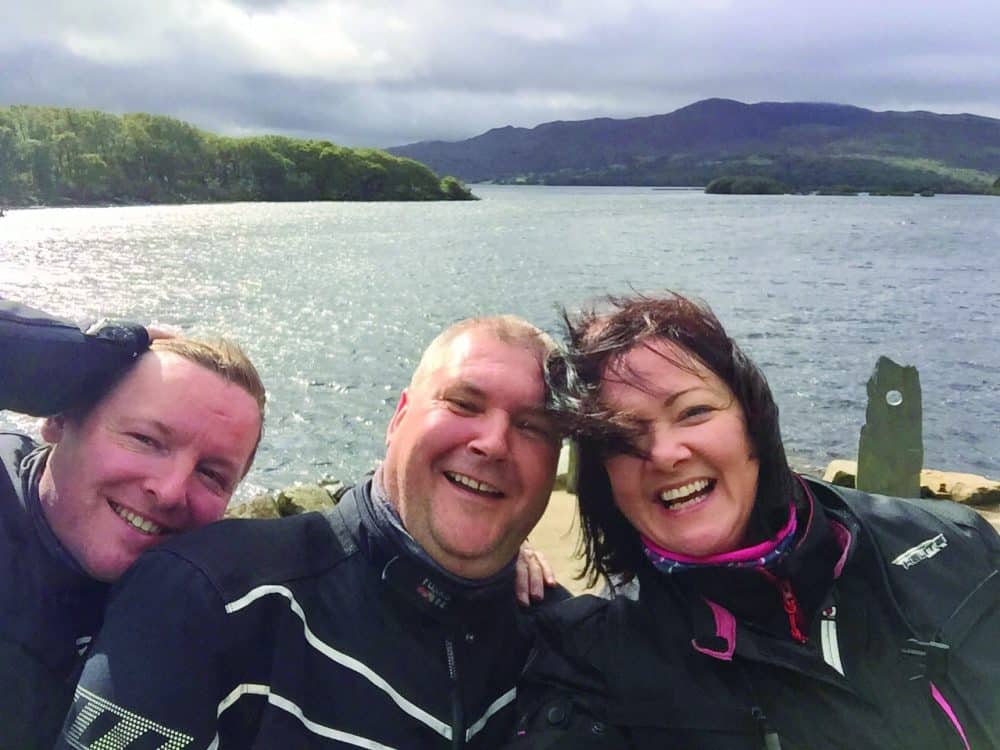 It was September 2018 that I attended my first 7Ws, and my first trip with TVAM. I had been full of anxiety, as I didn’t know what to expect and at that time didn’t really know many people. Those fears were soon squashed that weekend and, feeling that I had to spread the word on how great 7Ws is, I wrote about my experience for Slipstream.

Fast forward 12 months and I was counting the days until I headed off on another 7Ws. I was really looking forward to a weekend of riding, training, fun and catching up with friends made over the past year through other activities within TVAM.

On this trip , however, a new training opportunity called ‘Starburst’ was introduced which meant that there were now two types of training opportunities available to associates. The first was the usual group ride out with the advantage of being allocated different observed rides throughout the day, and the other (Starburst) was a full day’s 1:2 training session with an Observer. 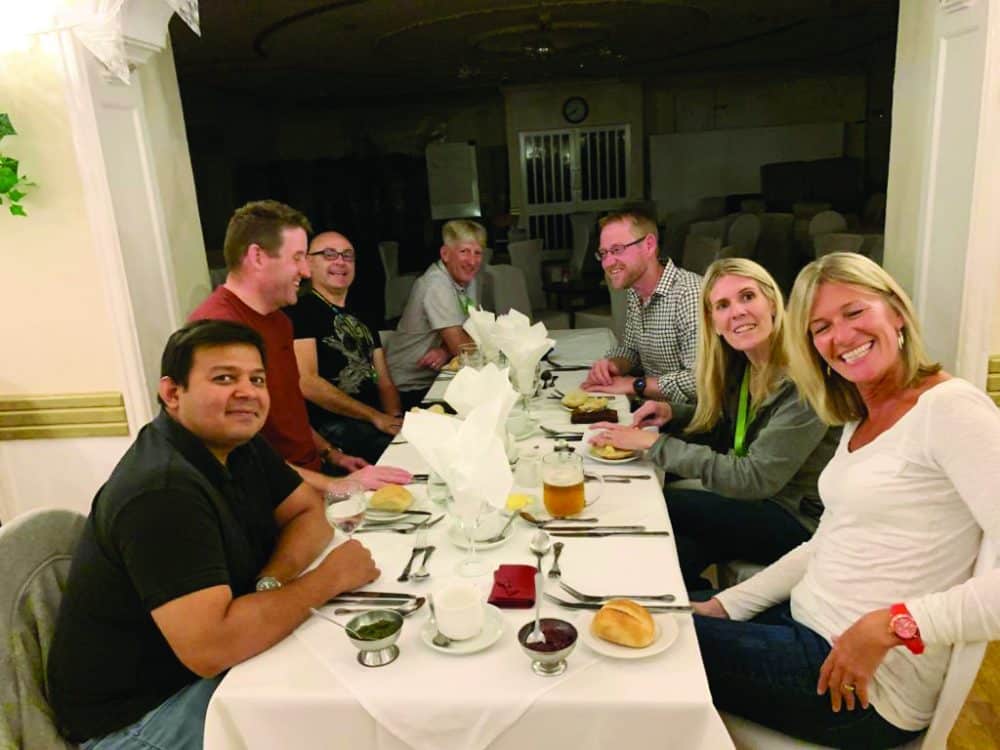 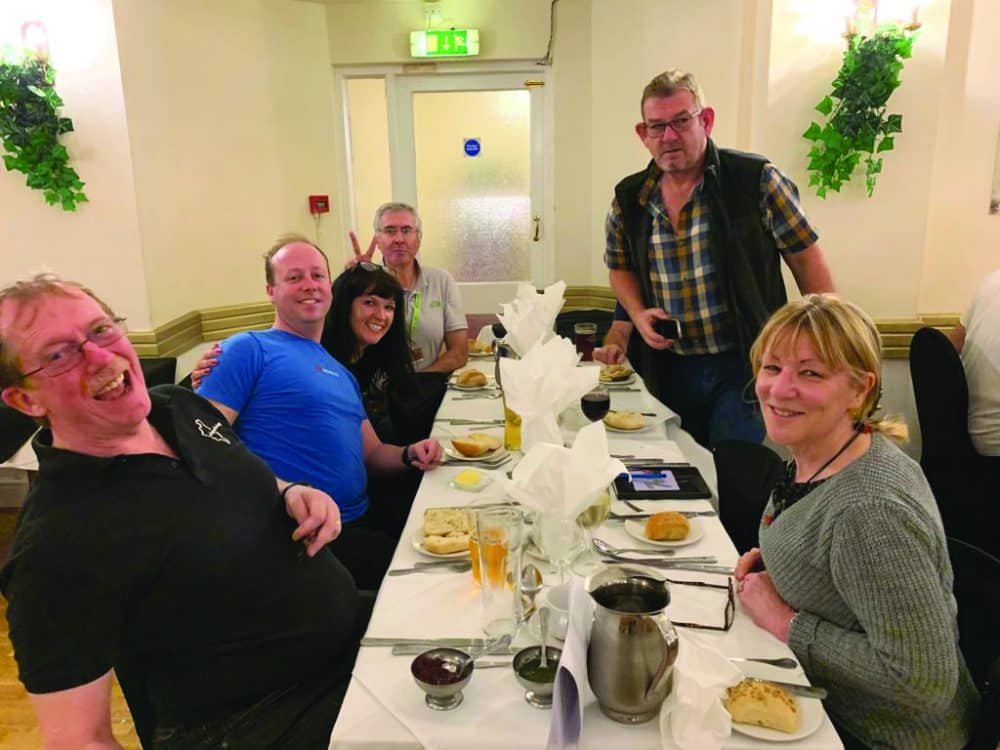 As this was the first time this training opportunity had been offered, my husband and I decided to sign up, thinking it would be the boost needed to iron out our bad habits. It certainly did that.

We were allocated Barrie Smith as our trainer for the day and it began with a very thorough briefing about what we could expect for the day ahead.  My husband and I each had different areas to work on. Barrie worked seamlessly the entire day so I didn’t feel like I was holding them back, and vice versa.

It really did feel like one to one training and he built my confidence so much. Barrie also recognised when I was tired from pushing myself and made sure I had sufficient breaks to recharge. I got so much out of the day and felt improvements on areas that I had struggled with before, as did my husband.

The route had a variety of fast-flowing, twisty roads and some more technical sections and just the right amount of traffic for overtaking practice. It took in parts of the Rhayadar ring, heading up to Snowdonia and stopping at a disused power-station with scenic views overlooking a lake at Llyn Trawsfyndd.

The return ride included Newtown to Crossgates where we could really put what we had learned during the day into practice. I couldn’t believe how I rode that route in comparison to the last time I was there – smoother, faster and safer.

The day included plenty of stops to discuss opportunities for learning and improvement, as well as lunch and cake stops. We both gained a lot out of it and would highly recommend the intensive training day if given the opportunity. What a great idea for associates! We really are spoilt for learning choices with this club.

A huge thank you to Barrie for his time and valuable training. We could definitely feel the difference riding home the following day. We would also like to thank Ness, Andy and all for making this 7Ws trip another one to remember. They even managed to control the doom and gloom weather for most parts of the days.

Roll on the next one. 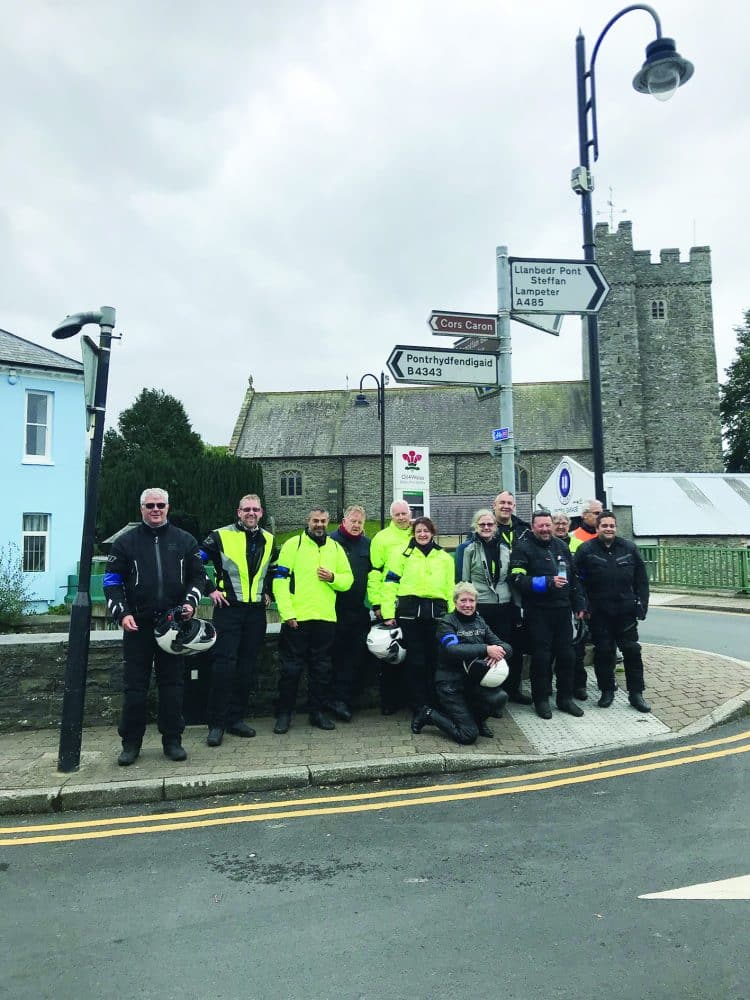 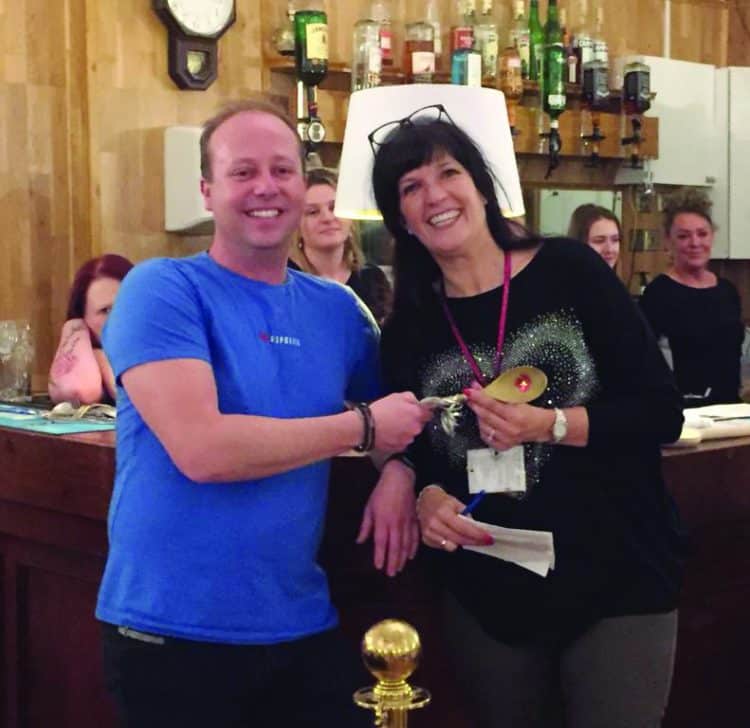 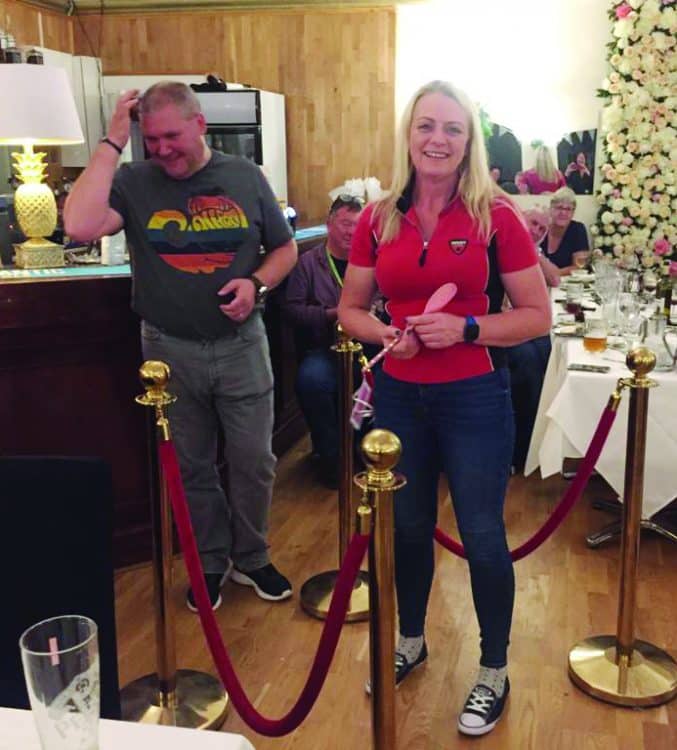 It goes without saying that 2020 has not exactly been the year for international travel, with or without a motorcycle. […]

Triumph has been around since 1902. In its heyday the company was one of the world’s most successful motorcycle brands, […]

Continuing our Rider’s Rides! Each month we feature a TVAM member and their bike, talk about why they chose that […]