Through Northern Europe & The Balkans to Athens

The usual winter time discussion over a beer: where can we go this year that would be memorable and that we haven’t been before? How about Athens?

International trips are easy to plan with Booking.com, magazine articles, Google maps distances, talking with mates and “bestbikingroads.com”. We aim to stay in reasonably-priced and characterful hotels, arrive at night stays between 5pm and 6pm, shower, beer, dinner. We ride 150-250 miles per day allowing for coffee stops, photograph stops and not racing the clock, unless it’s a schlep through Germany of 450 miles… which doesn’t take long on their motorways.

What could possibly go wrong?  Well, pretty well nothing much through the easy northern countries, across the fabulous Dolomites and into lovely Slovenia. It’s a lot like Austria, with mountains, a beautiful lake and world heritage site at Bled, and an attractive lively capital in Ljubljana. We find Germany, Austria and Switzerland fantastic biking but a bit sterile (or are we just jealous of the obvious wealth) and ……have BMW really made so many GSs? 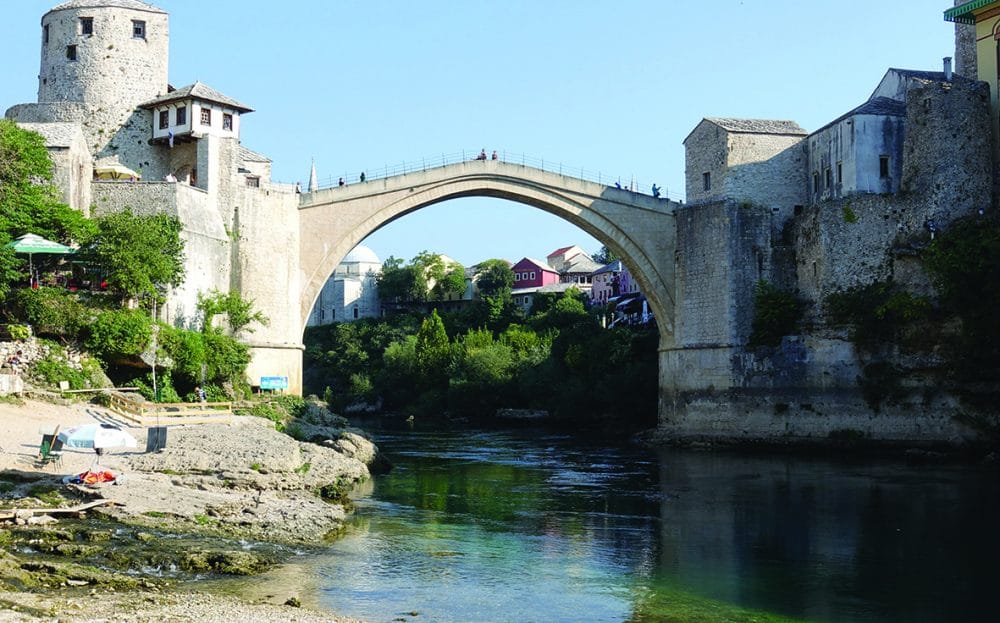 The Mostar Bridge, Bosnia and Herzegovina.

Riding through Croatia is terrific; beautiful and on good-condition coastal and inland roads.  It’s in the EU but not in the Schengen customs area, so border crossings can be slow at peak summer times, but not on this trip or others I’ve done. We went in mid-September and crossed at a quiet crossing, so there was no problem. Even though credit cards and Euros are “widely accepted” this is not universal so having some of the local currency (Kuna) is worthwhile. You can get Kuna in the UK.

Looking at the Foreign Office website, Kosovo seemed a bad idea. They advise against all but essential travel in the north and there are all sorts of problems trying to get from Kosovo into Serbia. Serbia looks easy and our bike insurance covered it, but the roads look OK rather than great and it sent us further east into Greece than we wanted.

So, Bosnia, Montenegro and Albania it was. No problems with hotel booking anywhere, so that’s easy. You need to get bike insurance at each of these borders, unless you can find a more helpful UK insurance company than we could. The currencies for Bosnia and Albania are also obtained at the borders. Credit cards are usually OK in hotels. Montenegro uses the Euro but is not in the EU and of course Greece is in the Euro Zone. Health insurance is a must of course.

In practice all of this worked smoothly with no crossing taking more than 45 minutes. The only delay was at the Montenegro/Albania border where the non-English speaking insurance man was so excited to have people who had ridden all the way from the UK in his office, that he made us speak to his son in London on Facetime. Typical of the lovely people we met everywhere.

Albania seemed a bit scary on the Foreign Office website: “Over 80,000 Brits visit Albania each year, mostly trouble free……you are advised not to get into arguments about traffic incidents since arms ownership is high”. That’s in addition to the warnings about landmines and unexploded munitions….and aggressive driving.

The roads in Bosnia are brilliant, curving through mountain ranges with little traffic. Mostar with its famous, religious and culturally significant rebuilt bridge, is now a major tourist destination.  It still has buildings with shell holes in the side and a conspicuous mix of churches and mosques with, what looks like, a competition to build the highest minaret/spire. The hotel put me in a noisy room near a rooftop club thinking that we were there for a cliff jumping competition and would be at the closing party. An easy mistake to make for two recently retired British guests! Maybe next year. We saw no Brits and heard no English spoken, a real adventure.

Montenegro is beautiful with the most amazing bay, the Bay of Kotor, which is more dramatic and unspoilt than anything in Spain, France, Italy or Croatia. It is becoming a playground of the rich, with some prices to match. There were loads of police with radar guns, which apparently is a feature of the Montenegrin coast; or so we were told by a keen motorcyclist on the reception at our slightly inland hotel. He advised us to head for the north of the country with quiet and police-free roads. Unfortunately, our itinerary did not allow for this but we still found some fabulous and empty roads. 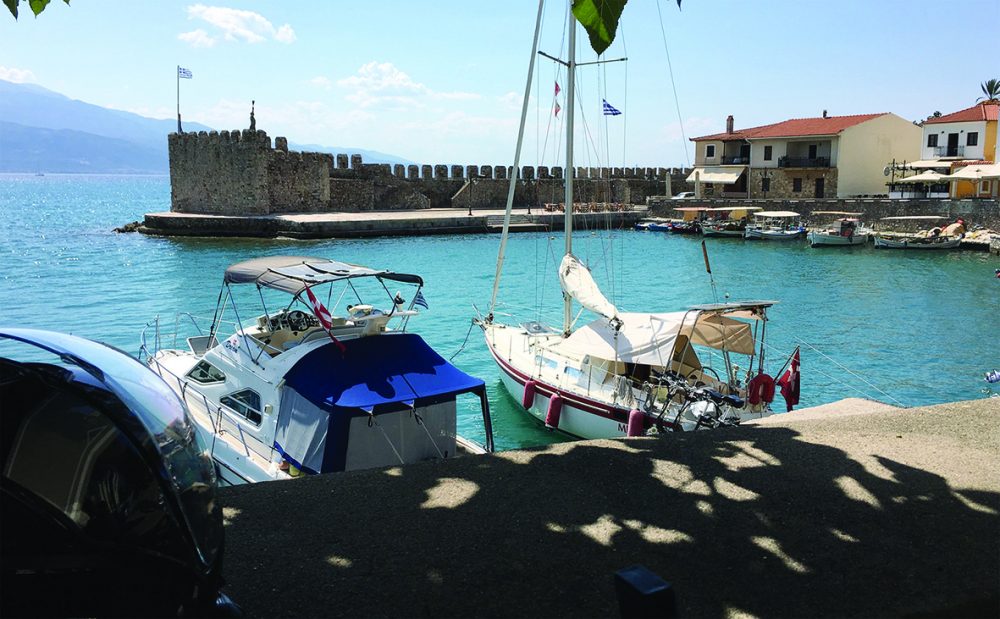 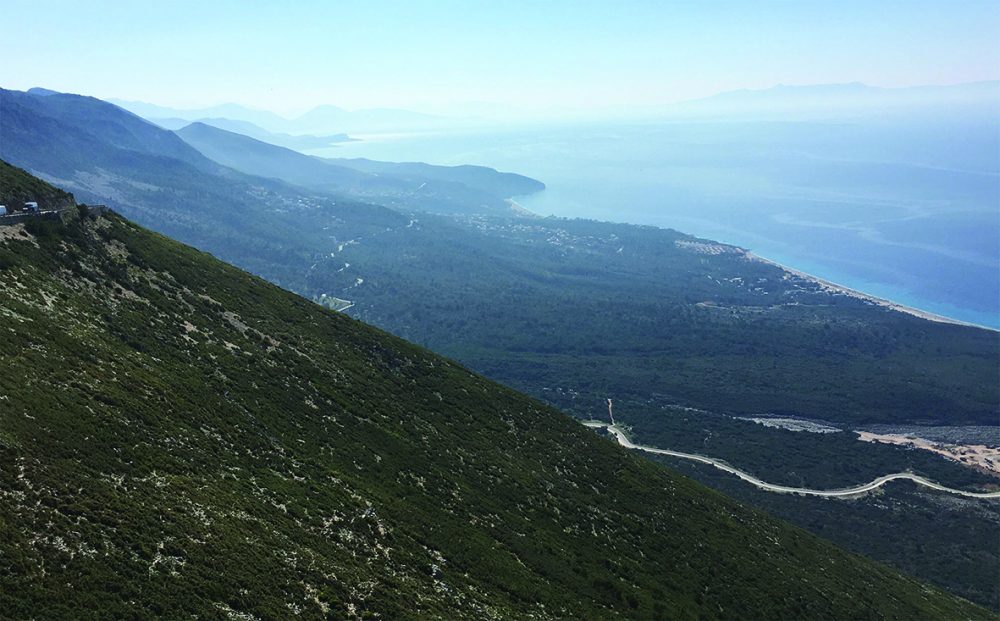 These former Yugoslavian countries are on the up, especially those on the sea or able to chase the tourist dollar (or Euro). There are some Soviet-era buildings which have often been nicely upgraded…formerly hotels for the workers. On the other hand, there are massive new graveyards, both Christian and Muslim, a reminder of the recent horrendous civil wars. The Mostar bridge was destroyed in 1993 after standing for over 400 years. This is one reason why these countries are keen members, or aspiring members, of the EU: to protect sovereignty and borders. 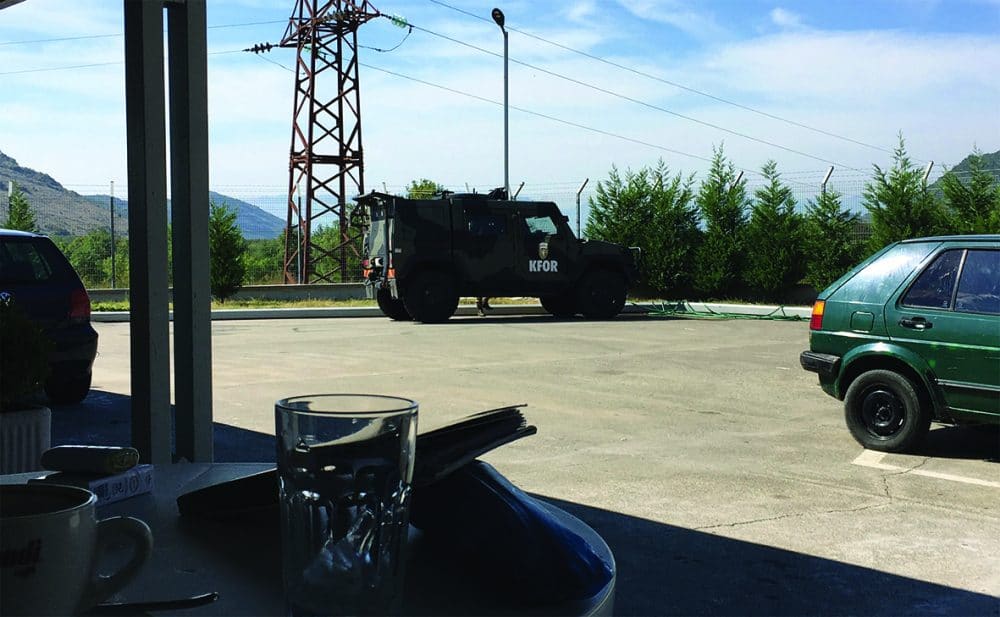 Peacekeepers in Albania for Kosovo

We should have looked at “bestbikingroads.com” more closely for Albania. The ride down the northern half was horrible. It is a minor oil-producing country with unattractive industry.  There are queues on its one motorway, as well as people selling produce on the hard shoulder. Every type of European four-legged animal is wandering about. In one town we found that all the man-hole covers were missing. I don’t remember that hazard in the advanced riding preparation!

The one central resort looked very Soviet with miles of identical blocks of flats perpendicular to the sea. Horrible! In contrast, further south, Vlore and Sarande were smart and sophisticated with a legendary coast road between them which was probably the motorcycling highlight of the trip: a euphoric mix of sweeping bends and tight corners, across a mountain pass, hugging the steep-sided hills that dropped off to the Mediterranean with views across to Corfu.

Northern Greece, again beautiful, but typical of Greece just now, ill-maintained and dispirited, with empty shops and cracked paving slabs. This was true of Ioannina a pretty lakeside town. Having said that, most towns have a lively area, especially if they have a Uni.  We were drawn into a café by Pink Floyd and Led Zeppelin, joining the young crowd with two nostalgic Brits of a certain age. Next stop was Delphi, home of the Oracle (named after a shopping centre in Reading). 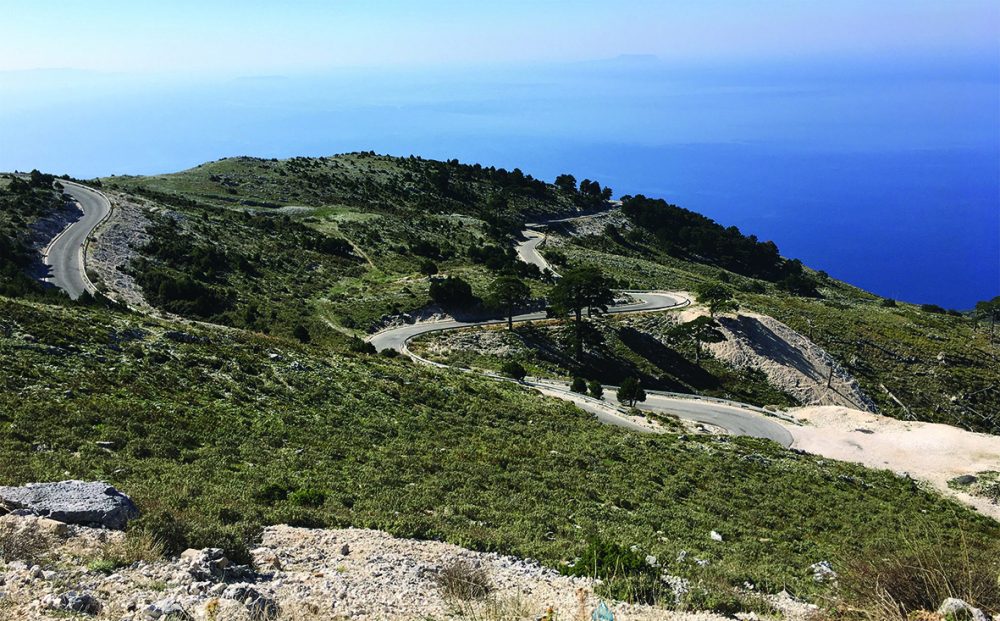 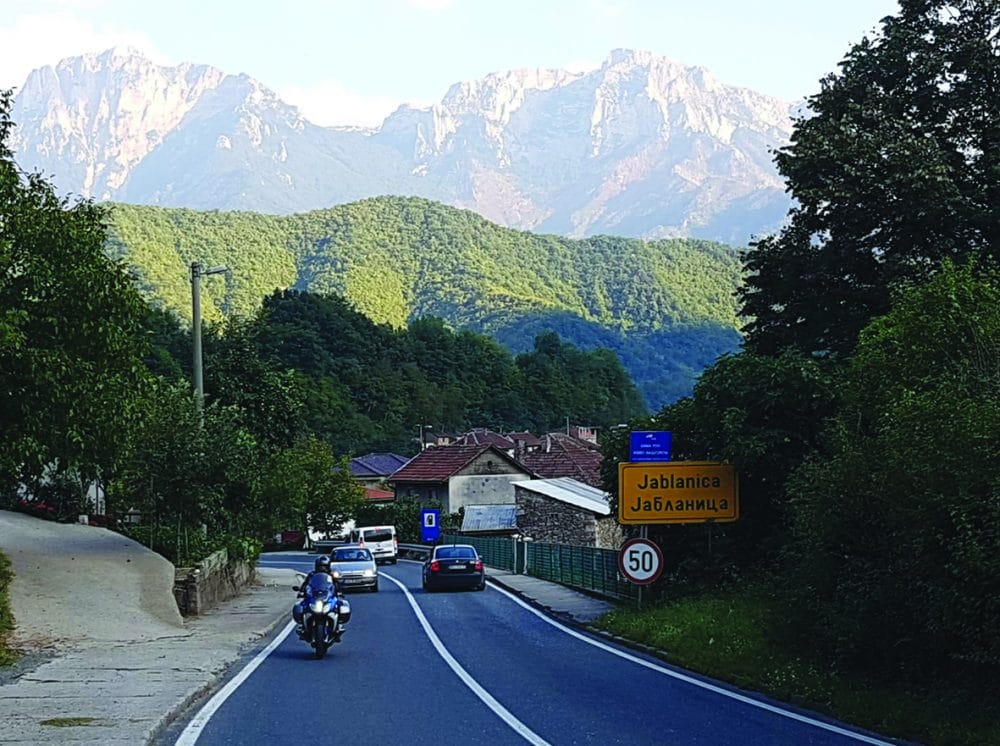 Leaving Jablanica in Bosnia and Herzegovina 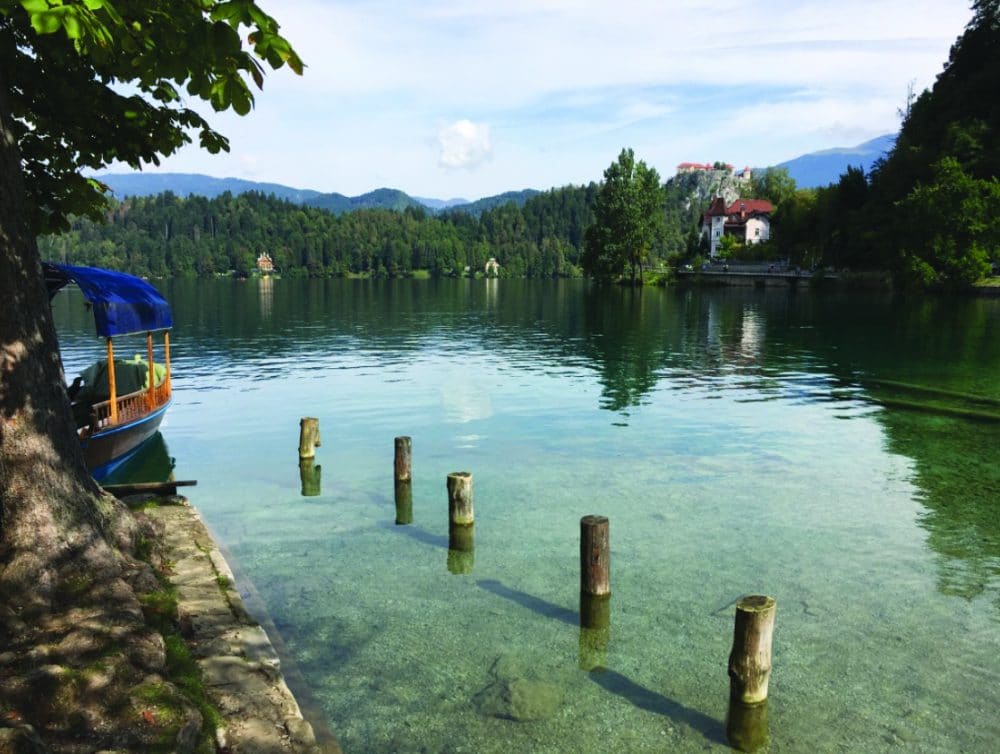 Our final bike destination was a transport depot on the outskirts of Athens thanks to the final fling of the suicide-inducing Garmins which sent us all over an industrial estate. Mapping is not so good in these countries and so sat-nav has a free range to send you all over the place. You need to have an idea in your head of where you are going.

Athens of course looked beautiful for the last night of the trip. A bus to Athens airport and EasyJet home and that was it.

Having done eleven countries in ten days we entrusted the return of the bikes to Kamikaze Motorcycles. I hope they didn’t pay consultants for the name because it gave mates a great chance to explain to us that our bikes would be dismantled and the bits sent to the Ukraine.  However, a week later they were in the depot in Essex. We would not have been able to get so far without them. 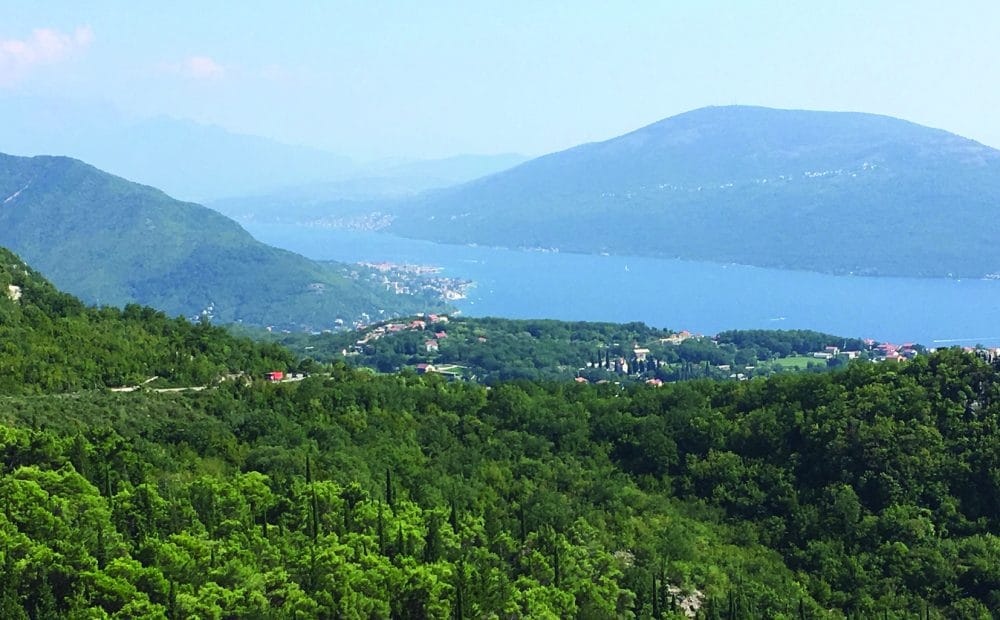 So any regrets? Absolutely none. Looking back even the horrible northern Albania added texture and contrast to the trip. Otherwise we experienced great roads and met great people. As always, one more day would have been nice to explore northern Montenegro and Albania for instance: same with any great trip.

So where this year…..places ending in ‘stan’ or Istanbul?

A Grand Day Out

You don’t see many wheelchairs at TVAM. “Thank goodness,” I hear you say. However, there was a very visible one […]

Part Four- Things Start to Come Together Blimey, has another month gone already? Time flies when you’re having fun. I […]

It seemed like a good idea at the time, volunteering to help man the TVAM stand at the MCN Festival […]