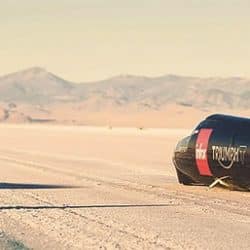 Trying to achieve 400mph on two wheels was never going to be easy. Racing the Isle of Man TT or the Dakar Rally is hard, but they’re more about endurance and consistency than they are about breaking new ground. It’s all been done before and you’re following in brave footsteps, aiming to beat the next man on the road – but pointing a 25ft, 1000bhp streamliner down a featureless salt strip at 400mph is a trip into the unknown. Nobody really knows what’s going to happen. But that’s also the thrill; both physically and from a technical point of view – you’re going where nobody has been before.

To quote the most famous salt pioneer of all time, Burt Munro, “You live more in five minutes flat-out on a bike than most people do in a lifetime.” And that’s why thrill-seekers and pioneers have been chasing land speed records on the Bonneville Salt Flats since 1914.

The desolate 40 square miles of dry lake bed isn’t a nice place to spend your time. There’s no shade, and no escape from the heat, but – as the record breakers will testify – land speed record attempts require a huge amount of patience, the conditions have to be perfect. That means sitting on the salt for days on end – waiting. The salt has to be rock solid, the wind has to be under 3mph and the bike has to be running absolutely perfectly. But conditions aren’t perfect. The crusty salt is too soft in places, recent rain having pooled into localised lakes, before evaporating back into the endless skies. It’s not baked hard, and that means trouble.

The FIM require the bike, and Guy to jump through hoops, resulting in another flurry of activity as a bike inspection leads to modifications required to satisfy racing regulations. Guy has to be able to exit the Streamliner unaided within 30 seconds, and having squeezed himself into the fuselage, he manages an exit again in just 15 seconds. Now he just needs to post a 300mph run to get the green light from the FIM to go for the record. Surely that’s easy? Guy nailed the Streamliner down the salt at 274.2mph just a few weeks earlier after barely more practice than you’d get test riding a bike from your local dealer.

The salt won’t give up its speed that easily. While being towed down the course for a sighting shakedown the Rocket gets caught in a rut, and turns over, sliding on its right hand side like a million-pound carbon fibre slug. Guy’s out in seconds, unharmed, but the spill means a return to the pits. Again, we wait. Days pass like this. Dawn on Sunday 9th October looks promising, and again the team run through the insanely convoluted process of readying the Rocket. Guy climbs in, the FIM are ready to observe, and he’s off under his own power. It looks good for around a mile, and then suddenly the Rocket is sideways, and sliding down the salt on its side again.

It’s an ignominious end to the attempt – but time has run out, and the Infor Rocket Streamliner needs too much attention to make it possible that they can get out again any time soon. It’s over, it’s time to leave the salt and regroup, to wait for another window of opportunity, to wait for perfection. Lady luck wasn’t on the team’s side this time.

“It’s all part of the job boy, isn’t it? Feeling our way,” said Guy. “I guess if it was an easy thing to do everyone would have done it by now. So we’ll get a plan sorted and get on with the next go at it as soon as we get the chance.”