It seemed like a good idea at the time, volunteering to help man the TVAM stand at the MCN Festival in Peterborough, with free camping thrown in. Kelly and I met up with Cheryl for the ride up to Peterborough, with Kelly agreeing to lead the way, as I can’t navigate to save my life!  After an uneventful ride up, we arrived at the showground, found our spot in the Clubs area and pitched tents.

We were soon joined by Phil, in the car and towing a trailer. The car and trailer turned out to have been previously owned by Dr Who as out came a tent, then another, then a marquee, then a gazebo, then a windbreak, then the TVAM sail flags. These were soon followed by enough camping equipment to support a Scout jamboree (tables, cooker, air mattresses, cool boxes, sleeping bags). Once all this was pitched/ raised/ setup, the Tardis then produced a BMW S1000 XR which Phil had picked up only a few days before. “I have some bits to fit onto this over the weekend,” he said smugly. With everything set up, we retired to the Moose Bar where we were later joined by Tony who had left Reading after work.

On Saturday morning, we set up our stand and waited for the crowds to flock to us, all eager to sign up. That was the idea, anyway. The weather was against us with rain putting off the hordes and we just talked bikes with the people who did stop. Phil decided it was the ideal opportunity to start “fettling”, oil cooler and radiator guards first. After 5 hours, much laughter and p**s taking, he had finally got them fitted – R&G have a lot to answer for! 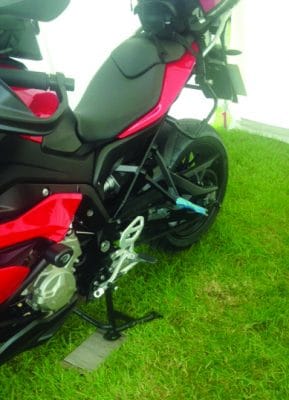 den. Cheryl went off to test ride a Monster 797 (“totally different to my Hornet, would need more time to get used to”), Kelly rode a Zero electric bike and Tony rode an Indian Chieftain (“very nice ride, light feel into corners, great look, nice sound but very jerky in corners”).

Whilst they were away, Phil decided that he would fit his new levers next. Unfortunately, he didn’t offer them up first and, having fitted the clutch lever, he realised that it wouldn’t clear some of the switches and dials on the bars, so every time he pulled the clutch in, his headlight would flash – back on with the old one! It was about then that I noticed that he was missing a pillion peg and mentioned it to him. He then proceeded to blame either Tony or me and thought we were holding it to ransom**. The banter lasted all weekend and I ended up making one for him out of twigs and Duct tape so he would feel better (see photo). ***

We were joined then by Andy, Ness and Andy’s son, Sam. They went to pitch their tent near ours, only to realise they had left the poles behind! One trip to Argos later, one new tent.

We all took turns to man the stand whilst others went off to visit the various trade stands (clothing, tools, manufacturers, moto jumble, usual show fare) and the club stands (mainly owner clubs, Honda, Ducati, 2-stroke, sidecars, Valkyries, etc) and Cheryl test rode a Honda CB1000R (“loved this bike, definitely one I’d consider in the future”) with Andy and Ness booking test rides for the next day. Phil fitted a fender extender and crash bungs and we all went for some light refreshment then turned in for the night.

On the Sunday, I got up early to book some test rides, but, being an advanced rider, I soon decided that someone else’s brand new bikes and a raging hangover do not mix! We again set up our stand, welcomed by glorious sunshine and bacon sandwiches. There seemed to be more people around. We also met Ross, who was up for the day, and who had just signed up for TVAM’s RideUp scheme. Andy and Ness went out on their rides and Cheryl came back infuriated (apparently the test ride she had booked with Honda had left 10 minutes earlier than scheduled).

During the morning, we all helped each other pack up and, with the show closing, we left about 3pm for the ride home. I got back around three hours later, tired but very contented. I think I can safely sum the weekend up with Tony and Cheryl’s comments: “great company, new friends, laughter and fun,” and I think we are all up for it next year!

*Yes, I know, I didn’t mention the marshmallows and chocolate, but they were in the mix somewhere

PS: Not all of this necessarily happened in the order stated as it’s all a bit of a blur, to tell the truth, but it did all happen at some stage as did a lot more besides! Come and join us at one of our future promotional events.

I suspect the answer to that question is different for every new associate that signs up. Some need the qualification […]