Science of Being Seen – Part 1 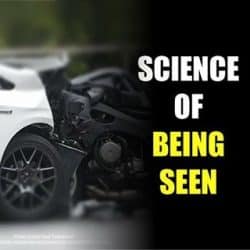 Unless you’ve been under a rock, you’ve probably heard of ‘Biker Down’. It’s an accident scene management and first aid course delivered to motorcyclists by many UK fire services. It’s been adopted by the military too.

There’s also a third pro-active safety module on Biker Down. Most teams run a presentation called the ‘Science Of Being Seen’.

You may not know where it came from.

I’m the author, Kevin Williams of Survival Skills Rider Training. I created the Science Of Being Seen (SOBS) in early 2012 for Kent Fire and Rescue, the originators of Biker Down. Later that year, we won a Prince Michael of Kent International Road Safety Award, plus an insurance industry award in 2013. Most Biker Down teams deliver a modified version of my SOBS presentation. I deliver SOBS monthly for KFRS, as well as clubs and groups around the south of England.

How did I come to put SOBS together? I’ll fill you in. Leaving London University with a science degree that wasn’t finding a job, I spent sixteen years and half-a-million miles paying the bills by delivering parcels in London. The job funded me through a Masters degree but eventually I changed career (if not mode of transport) in 1995 and trained as a basic instructor.

Although I continued as a DAS instructor until 2006, I also launched my advanced training school, Survival Skills, in 1997. I subsequently added a BTEC in post-test training and an NVQ in distance learning, and I’ve continued in post-test instruction ever since.

I’ve written for MAG for almost twenty years and my work’s been published in several motorcycle magazines plus the Telegraph. I’ve worked with a number of organisations on projects to do with rider safety, including Bucks County Council and Somerset Road Safety Partnership, and last year I acted as consultant to the Transport Research Laboratory.

I spent February 2018 in New Zealand as ‘keynote speaker’ (sounds important, doesn’t it?) on the Shiny Side Up Tour, for the NZ Department of Transport. SOBS was delivered at a dozen different venues on North and South Islands. I was lucky enough to be invited back in February 2019 and gave even more talks.

So what is SOBS all about? Let’s start with a bit of background. I cut my despatching teeth in the era when every rider ‘knew’ blind Volvo drivers who “don’t look properly” caused the ‘Sorry Mate I Didn’t See You’ SMIDSY crash and killed bikers. An old buddy of mine called Dave Brown – now a top political cartoonist – drew a short-lived cartoon series called ‘Planet Ovlov’ for one of the motorcycle magazines. Why Ovlov? Turn the letters around. My early days as a courier seemed to confirm that. I had a few near-misses and one low-speed bump. “Sorry Mate…” etc etc.

Around the same time, we were first told to use hi-vis clothing and ride with headlights on (a choice most of us no longer have). We were told that these ‘conspicuity aids’ would make us more visible, and drivers could see us coming. It sounded good in theory. London’s mid-70’s ‘Ride Bright’ campaign was probably a world first. Yet the more I rode, the more it seemed to me that staying out of trouble was down to me. I realised that more often than not, collisions between motorcycles and other vehicles at junctions were avoidable.

In 1995 when I started working as a trainer, I was supposed to promote hi-vis and use lights to new riders. Remember, my background is in science. One thing that science teaches us is never to accept something on trust alone. My courier experience started me wondering if conspicuity aids actually worked or if there was something wrong with the ‘be bright, be seen’ advice.

My first investigations into what are now known as ‘Looked But Failed To See’ collisions fortunately coincided with university research institutes opening up their libraries to the internet. A quick look at comparative accident statistics for before / after the ‘Ride Bright’ campaigns suggested nothing much had changed – junction collisions still topped the list and drivers still weren’t spotting bikes. And riders still sailed into these collisions. Ever since I started bike training, I’ve warned riders not to place any great trust in conspicuity aids but to be ready to take evasive action. Way back in my very first MAG column in 2002, I wrote:

“It’s easy to point the finger of blame at car drivers but it’s worth remembering “it takes Two to Tangle” – one vehicle operator to make the initial mistake, but the second (all too often a rider) to sail blindly into the trap.”

Fast forward to 2012, when I started to put SOBS together… still no change in accident locations. Junction collisions STILL top the list. But by now, there were hundreds of studies investigating car/bike collisions! They date from the 60s to 2019. Some are primitive lab exercises using photos or videos asking simplistic questions like “which bike is more visible – the white one or the black one?”. Others are more complex off- or on-road behavioural studies. The latest are highly sophisticated studies which may use a high fidelity simulator or even track real-time behaviour in a genuine driving environment. Crucially, the latest avoid priming the subject by telling them what the experiment is actually looking for.

These studies aren’t only from the UK, Europe, North America, nor even the Western world. I’ve seen studies from Israel, Australia and New Zealand, as well as developing countries in Asia.

And here’s something very interesting. Wherever you look, motorcyclists have much the same collisions with turning vehicles. The crashes happen regardless of standards of training and driving, and regardless of road rules and deterrents. That implies human factors at work.

Even more interestingly, training seems to play little part in our ability to avoid these collisions. The implication is that training that focuses on skills alone is inadequate, and what’s needed is more insight when applying our skills. In other words, to avoid being caught out by someone else’s mistake, we need to understand what, where, why and how things go wrong.

That’s what SOBS will be looking at in the next few issues of the magazine.

The Science Of Being Seen – the book of the presentation £9.99 plus P&P and available now from: www.lulu.com