Sometimes how much fun you had during an event is best measured by how you feel in the days following; the tiredness and feeling low only being the swing back from the size of the adrenaline-fueled high.

How many bikes, in any manufacturer’s range, can run that high in the rev range for 24 hours? We averaged 48mph over the 1080 miles covered if we include stops. We took in 12 fuel stops and about 160 minutes off the bikes for fueling and breaks, giving 1190 minutes riding (that’s 19 hours and 50 minutes for those of you without a calculator). The G310 bikes ran perfectly, never missing a single-cylinder beat and never letting us down, utterly reliable.

The start was in Guildford, close to work, at first light. We set off just before 5am and chased the sunrise, until it started to shower as we drove through East Anglia. Getting some early motorway miles along the Miserable 25 (sorry M25) was important. We made great time to Great Yarmouth and knowing the roads certainly helped as we rolled in 25 minutes early, clearly making better time than the predicted progress from myrouteapp.

A sterling start and this helped set the mood – we can do this, we have a realistic shot. There was no going back and no negative thinking. Before we started I was very optimistic and our mindset was always, “The bikes are capable and we have to dig deep to match the bikes.” I also anticipated that an easy run at the start of the day was crucial.

From Great Yarmouth the roads became congested with bleary-eyed drivers but yet again this was no issue for the mighty G310s. Our steel horses allowed us to carve through the traffic, the lightweight bikes filtering better than an Italian barista who had consumed too many espressos that morning.

During this leg, which took us towards the A1 for the northern route, James and I had an opportunity to road test some of the bike features. For example, we discovered that during a 3rd Gear roll on test the GS smashed the R but the R was back on top when we changed the test to a 4th Gear roll on test. The GS has better fuel range than the R, but the R has more top end with slightly better brakes.

By the end of the trip I think I can comfortably say the GS was better for the long trip, given the extra leg room and height. The screen on the GS also helps. Each time I looked back on the motorways I could see James’ gangly figure tucked in like Frankie Detori, or was he spooning it?

The A1 and M62 past Ferrybridge and then A55 to Bangor went by in a blur of motorway miles with bluetooth headsets and Amazon music to the rescue. We shared on Instagram the jubilation (or was it relief) of reaching the next corners but the best was yet to come. We knew we could make it. Bangor was half way and now we were heading home.

The stories of the Red Dragon, so synonymous with Wales, lie in both myth and fact. I can say that the roads in Wales are like the Dragon both mythical and factual, a true treat. The only trouble with these slinky black ribbons that wind through the proclaimed God’s Country and the numerous villages, is that they slow the overall progress. That said, we enjoyed carving our way through the breathtaking Welsh scenery and we even took time out to stop for photos. 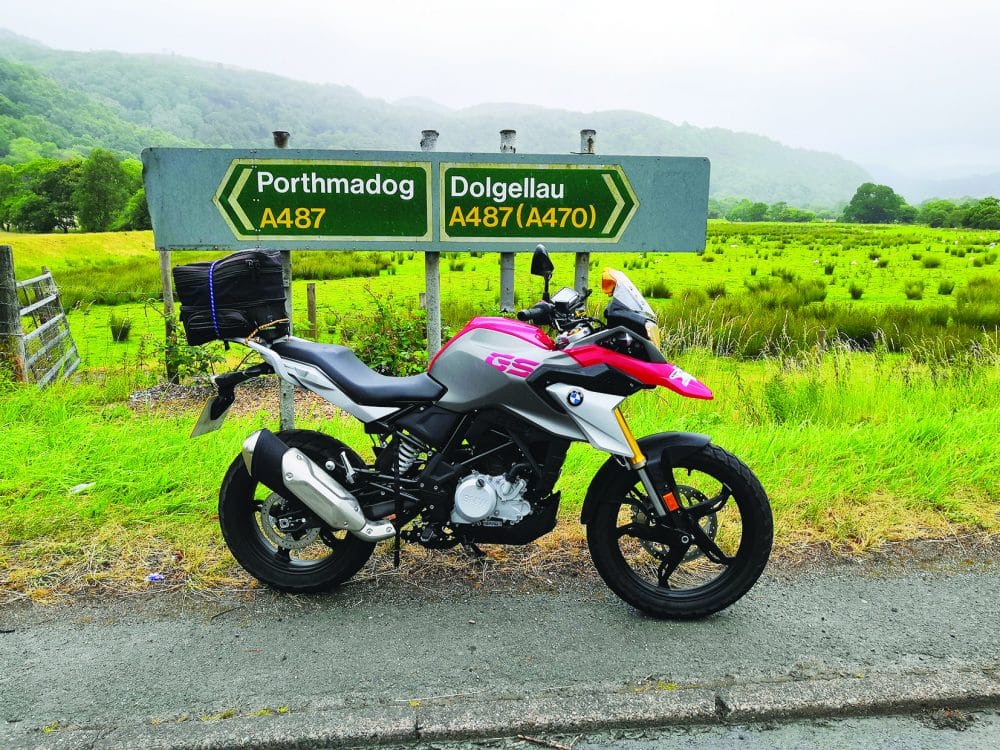 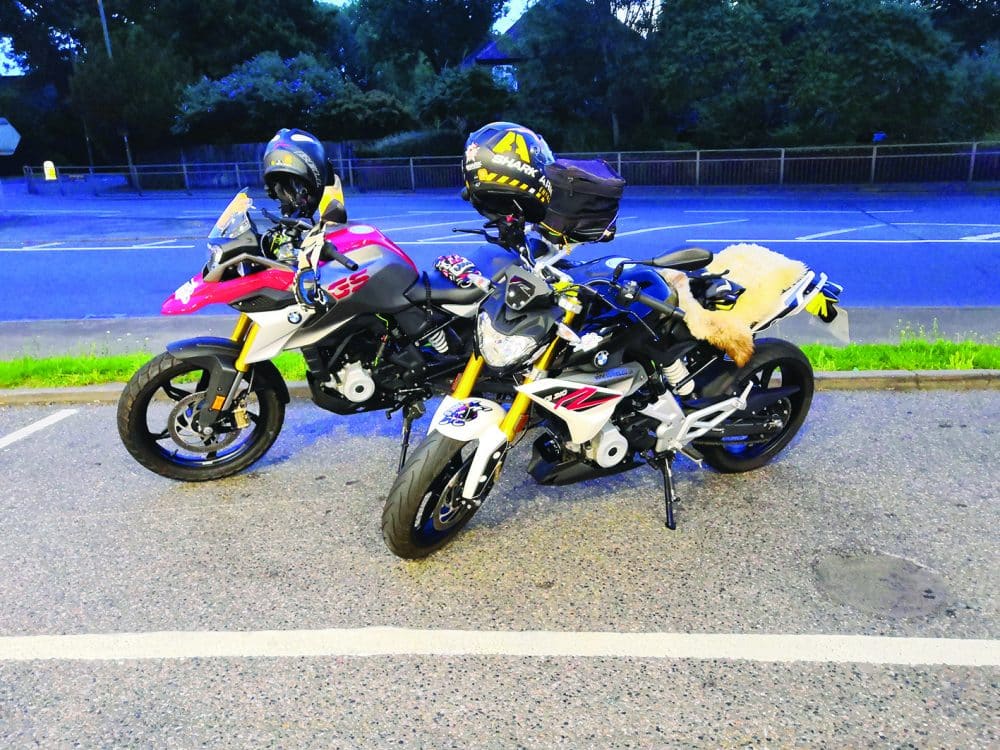 Let’s not forget that the Saddlesore is not a race but a challenge to be enjoyed at every opportunity. Taking motorways and major A roads is easier but not as enjoyable. Remember the highs and lows? This was a high.

At Haverfordwest we took a much-needed break, went live on Instagram and grabbed food. We were ahead of the worst case scenario but behind the earliest time of arrival, we were in good shape. Spirits were high but we also knew that we would be leaving behind the best of the riding.

Heading to Exeter was going to be a slog. A combination of motorway and major A roads with these amazing little yellow-coloured devices to help verify our average speed at every opportunity, how helpful? Night fell over Wales and we drew into what would be the most dangerous section. Because the G310s were doing 150-170 miles on a tank we stopped frequently and looking back on this it was a strategy that kept us fresh.

In general we felt driving standards to be very good across the UK, I only had one moment where a van decided to shift from the left lane on the roundabout to take the right exit, so cutting straight in front of me. My eyes were high and so it was all under control but, despite what is implied by roadcraft, I am only human and I did share universally acknowledged hand signals for indicating which direction the driver should have taken. Both duly acknowledged with apologetic hands from the driver that implied “sorry mate I didn’t see you’’. No harm, no foul, let’s crack on with the ride.

At Exeter we took stock. I grab out the inner jacket for my trusty StreetGuard Suit, which has never let me down. If there was one criticism of the bikes it has to be the headlights. If buying the G310GS, I would add the BMW Auxiliary Lights. I had to use what amounted to a tealight candle to cut a path along the A35 in the complete darkness. It is rather eerie with no roadside lighting. Fortunately, the risk of wildlife taking a kamikaze run kept the adrenaline flowing. I had to draw on every ounce of experience to keep systematic.

Ah the true challenge begins, no longer about the 33hp performance but now about the head handling fatigue and picking the right riding lines at night. On the A35 coming to Dorchester we caught up to a car that was making good and safe progress. I took the decision to follow. The car’s main beam bringing an early dawn to the night sky, I could see again. James, my constant shadow, summarised this route beautifully. A challenge mentally and a test of the bike as I had to fight for quick corrections, which the bike gave me every time I asked, although I would probably have shod the G310GS with different rubber, as the feel is not great at the edge of the tyre.

A splash and dash at Ringwood gave an opportunity to observe interesting local life venturing out in the wee hours. Judging the condition and stagger of this specimen I dare say that staying at home would have been a better shout. These are some of the risks with night riding, yet fewer patrols and more yellow devices on poles in the sky are suggested to be the correct strategy.

From Ringwood it was fairly simple riding to Brighton. The roads were lit up like the daytime and a kaleidoscope of cats-eyes gave me a runway strip to aim for. Still eyes wide open. A brief detour around the outside of Brighton following diversion signs put a small dent in our time, but we knew we had this in the bag, we knew the bikes were solid. It would only be our own misjudgment that would let the side down. We’re going to make it!

I enjoy working for BMW; it is a brilliant Brand to work with. Likewise I don’t think many people would say, at around two in the morning, that they would be looking forward to heading to work, however, we were two such people. James had reached the point of, ‘let’s get this over with’ and wanted to rush the Brighton fuel stop. I did slow things down deliberately to ensure we left with the right mindset. We had a long 50mph Average Speed Camera stint to do and we needed to keep focused. These were the banker miles. Brighton was 1000 and everything else was dotting i’s and crossing the t’s.

We rolled into Guildford before 3:30am. An almost anticlimactic feeling crept over us. A combination of relief, excitement, tiredness and the realisation we had to ride home. Where’s my bed? After photos, we both said to each other “stay safe”, knowing that most accidents happen close to home. This final part is a word of caution. On my way home I knocked back the speed, even in nationals to around 45mph. Exiting a village towards the wood, I came round a corner to see a deer exit the woods. I was in the correct road position so handled the situation by slowing and pulling across the road. The deer and I play another day. 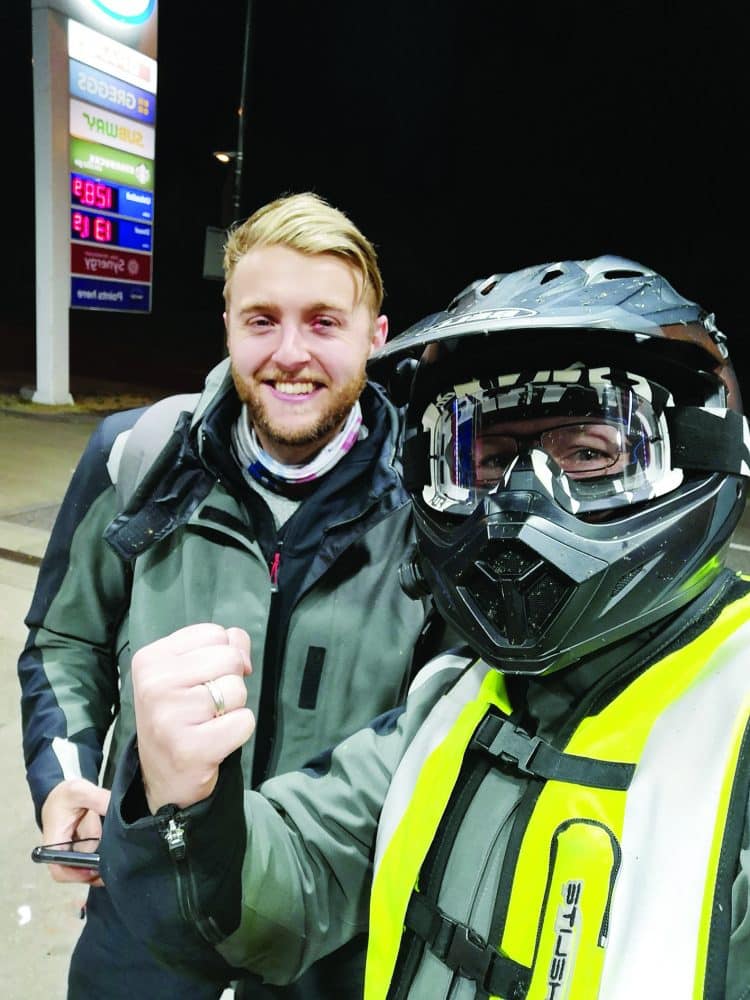 Lightning can strike twice, about two miles up the road another deer bolted from the woods and again I duly manoeuvred around. Bambi and I head off to tell this tale. Don’t drop your guard after the perceived Iron Butt finishing line, the finish is at home in bed.

My thanks to the following groups for promotion and members donations: my IAM group TVAM, Thames Valley ROSPA and Southern BMW Owners Group. A special thanks to my wife and family for their support. My wife’s remark was a word of thanks to BMW, the G310 did not wake her up upon my return. If you do wish to contact me about BMW or the trip then please email me simon_forder@hotmail.com. Finally, thank you to everyone who donated to https://www.justgiving.com/fundraising/vinesbikesfundraising or in the pots. We think combined we have just about reached our target, post-event donations still very welcome!