Each month we’re going to feature a TVAM member and their bike, talk about why they chose that model, what they use it for, as well as what they like and dislike about it.

Get in touch at pressofficer@slipstream.org

This month we have Cliff Lester and his box-fresh FireBlade:

Welcome, Cliff! What exactly are we looking at here today?

This is my newish Honda Fireblade, specifically the SP1 model.

And how long has this been gracing your garage?

A couple of months.

Did this replace another bike, or is it an addition to the garage?

It’s a replacement for my previous bike, a BMW S1000RR. I’d only had it for two years, but I really fancied the new ‘Blade.

Sportsbike enthusiasts are spoilt for choice at the moment – what else did you look at when shopping?

I considered the Yamaha R1M, as well as the new Ducati Panigale V4S and Aprilia RSV4 Factory.

Honda beat out some very trick hardware then! No interest in the new Suzuki GSXR-1000, Kawasaki ZX-10R, or perhaps another BMW?

Not really; I’ve experienced the BMW already, and owned three ZX10’s in the past! Plus I’m not really a lover of the GSXR…

Anything in particular you were evaluating the bikes on when you were conducting your test-rides?

Rideabilty, as well as quality of the suspension and brakes. Also ease of electronics – the BMW has the tech, but it’s not always easy to use.

Which dealer did you purchase your new Fireblade from? Would you recommend them to other TVAM members?

Fowlers of Bristol. As for recommending them, I would, and I wouldn’t. I had good service when buying the bike but paid for both a tail tidy and radiator guard to be fitted as part of the deal. When I came to collect it they’d fitted the tail tidy but said they didn’t have time for the radiator guard! I wasn’t very impressed.

That is rather disappointing. Have you made any further modifications or installed any accessories since then?

I’ve fitted a World SuperBike Akrapovic slip-on exhaust, as well as a double-bubble screen, but that’s it for now.

What sort of riding do you do/plan on doing with this bike?

There’s a group of us that go on regular A road runs, so more of that for sure. We’ve also been on our annual Le Mans MotoGP trip together; I found the ‘Blade to be amazing on the twisty French roads. I’ve also enjoyed a few track days and A runs with TVAM group – it’s perfect for all that stuff.

Has purchasing this bike changed the sort of riding you do, or how you ride?

No, I’ve always had sports bikes, so I’ve always ridden like this. The Honda has improved my cornering confidence slightly, as this bike is so easy to ride – it feels like it’s on rails!

Is there anything you miss from your S1000RR?

The heated grips and cruise control – they should really be standard at this price. But other than that I do feel that it’s a better bike.

Can you elaborate on that? What about the Honda makes it so special?

The ease of the ride, up & down quick-shifter is so smooth and never misses a beat. The dashboard is beautifully done – so easy to read and adjusting any of your setups is a piece of cake. The Öhlins suspension is incredible (as usual) and the brakes are fantastic. It’s an all-round amazing bike.

What’s the one thing about your bike you would change if you could?

I’ve changed the things that needed changing – the usual things I always do on a bike. But nothing else, it looks lovely and goes well.

Any problems or technical issues with all that electronic wizardry?

Well I’ve only put 1,500 miles on it so far and everything is good for the moment. No problems at all!

So it sounds like you’re pretty pleased with your purchase?

Extremely pleased. It’s the first Fireblade I’ve ever owned and I love it. 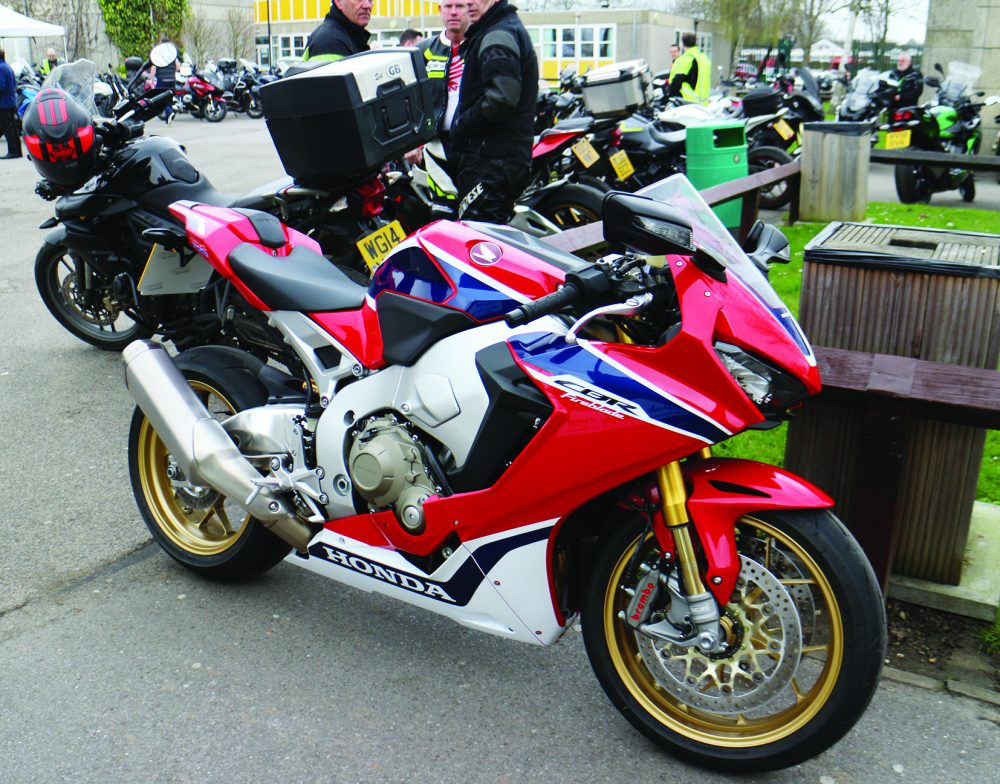 Nick Tasker was talking to Cliff Lester in June this year.

Science of Being Seen – Part 3

The weekend of the 9-11th August saw 30 riders and 1 pillion head to Ross-on-Wye for a superb weekend, staying […]

What a trip! It all started with an email earlier in the year from Alan Mossman, informing us of an […]