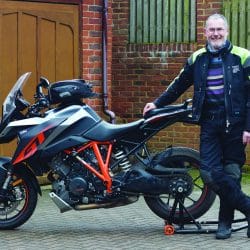 Welcome to Rider’s Rides! Each month we’ll feature a TVAM member and their bike, talk about why they chose that model, what they use it for, as well as what they like and dislike about it. Want to see your bike featured? Get in touch at pressofficer@slipstream.org

This month we have our Chief Observer Pat Coneley and his KTM:

So what bike are we looking at here?

And what does the GT stand for?

Well, it’s the kind of touring version of the Superduke. The original Superduke was a naked bike – same engine, same frame, slightly lighter. With the GT they’ve engineered some integral panniers, giving it some touring capability. They’re styled with the bike, and as panniers go, they look pretty good. They’re not huge like those on a GS, but they’re big enough. Fortunately they only have to cater for one as Amanda has her own bikes. She carries her stuff, I carry mine.

How long have you had the bike?

Did it replace another bike or is this an addition to the garage?

Replacement. I already had a KTM, an 1190 Adventure, for three years. I think I put 36,000 miles on it. I don’t really have any off-road aspirations, so other than a few rocky tracks abroad on holiday it was only ever a tarmac bike. I figured why not try something a little bit more road focused with a smaller front wheel? I don’t particularly like bigger front wheels, find them a bit vague. KTM launched the GT, I tried it, and that was it, I fell in love.

What in particular is it that draws you to KTMs?

Well, if you cut me in half I don’t exactly bleed orange. I’ve had Honda’s, Suzuki’s, quite a range of bikes, but I like V-Twins, I like the power delivery, that punch, and I like the fact that they’re very slim-waisted, which my older ZX-9R was not. I like that slimness, both from a handling point of view, and from a filtering point of view. I like lighter bikes, and while the GT looks pretty big and heavy, it isn’t. It’s not that much more than 200kg dry, so 230kg fully fuelled, and it’s quite a big tank.

Do you agree that the safety nets on modern high-end bikes are a reflection of a rider demographic that no longer has the strength or skill to handle these increasingly powerful machines?

I do think it’s a factor. Manufacturers are being encouraged to produce bikes of such power that the only way that we can make them rideable for inexperienced riders is to inhibit them electronically, to which you could argue, well why do we bother? I know I’m riding one, but why do we need a 170bhp bike if it needs electronics to reign it in? I made reference to my ZX-9R, that was an old-style full-fat sportsbike; it didn’t even know which gear you were in! If you were daft enough to ask for it, it would give you 140bhp in first gear, which would loop it. The traction control was just my right hand and brain, and there’s something nice about that.

Many bike magazines praise traction control and ABS as a great way to enable us to ride faster than ever on roads, while others dislike them for encouraging people to rely upon the computer too much. What’s your view?

I think anything that makes bikes safer is a good thing. My view is that we ought to develop the skill to not need these things, but developing that skill safely could be quite a hazardous process. Within TVAM we encourage people to develop the skills stage by stage in a supportive learning environment with courses like Look Lean Roll and Advanced Braking. But to put an article in a magazine and then suggest to people they then go out and try all, that is probably not a good thing, and not very responsible.

So they may be good training wheels then?

Yes. And by the same token, if the planning does go wrong, if there suddenly is something in front of you, a truck coming the other way, and instinct tells you just to grab a handful…ABS can be a real lifesaver.

So which dealer got your business in this case?

Premier Bikes in Didcot. I’ve known them for quite a long time, and they’ve been brilliant. And what I liked about them is that they’re very straight. When KTM introduced the 1190 Adventure it was a new bike to them, and what really impressed me was that they were completely honest if they didn’t know the answers to my questions. That gave me a lot of faith in their workshop, which I still have. They’ve been brilliant.

Have you had any technical problems or anything with this Superduke or previous Adventure that needed it to go back to the dealer?

I’ve had a number of recalls as with a lot of bikes, but nothing that stopped me on the road. A couple of punctures, but I don’t blame KTM for that! Some niggling things, like the horn – KTM horns seem famous for not working when they’re hot. They’ve had the pin on the side stand, the bit you hook your foot on – they’ve had a number of those fall out. In fact, mine as well, but that’s not a particularly big deal, they sent me a new one and I screwed it in.

Have you installed any additional accessories or made any modifications to the bike since you bought it?

I put the Satnav mount on it, I put wiring in for heated gear, and that’s about it. There’s the Givi tankbag, but I quite like keeping bikes standard. I’m not a great fan of loud cans, I find them tiring. They sound fantastic when you hear one go by, but if you’re riding it for 300 miles it can get a bit wearing! And the standard exhaust on the GT, it’s got quite a nice sound.

This is obviously more of a road bike than your 1190 Adventure was. Have you found that riding the Superduke GT has changed your riding style in any way?

Yes, slightly. The weight distribution is probably the same as most bikes, but I’ve found it’s shorter, so if I’m snugged up to the tank I’m quite close to the front end. I find it easier to go deep into a bend, counter steer it hard and gas it out, and it encourages that kind of riding. On the Adventure I was a bit more planned about things; I’m not sure if it’s a good thing or a bad thing, but it’s an awful lot of fun!

And the handling is phenomenal; a very easy bike to turn, which translates into some benefits. I can get the bike leaned quicker, so I’ll often find I don’t need to lean it as much, and corners are about average lean rather than maximum lean. You see riders who tend to turn the bike very slowly because they lean their body, so they bring the lean on quite slowly, which means you’ve often got to lean it over quite a long way to get around a corner.

Is there anything you miss from the Adventure?

What are the least favourite aspects of your GT?

Cleaning it? Like most naked bikes it’s a sod to clean! But you can get in to most of it, it just takes a while. And it’s better than the 1190 – the Adventure had spoked wheels, I don’t know if you’ve ever had a bike with spoked wheels?

Yeah, I avoid them like the plague for that exact reason.

The Superduke has got cast wheels, and they’re quite a nice rounded shape so it’s easier to keep clean than the Adventure was. And the ignition key’s a fiddle to get at with the tank bag on. Unlike most bikes where it’s in the steering head, here it’s set further back in an infill panel in the tank. It’s only a tiny thing but it is a fiddle.

So far you’re pleased with the bike then?