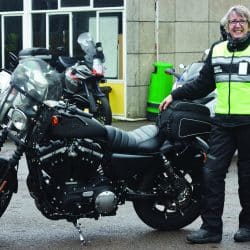 Introducing a new feature here in Slipstream: Rider’s Rides! Each month we’re going to feature a TVAM member and their bike, talk about why they chose that model, what they use it for, as well as what they like and dislike about it.

Want to see your bike featured?         Get in touch with Nick Tasker at pressofficer@slipstream.org

This month we have Kathy Drogemuller and her new Harley-Davidson Sportster Iron 883:

So Kathy, how long have you had this particular bike?

So it’s new then! Why replace your previous Sportster?

My bike was beginning to look a bit tired. It was at 20,000 miles and was due a service. Both mudguards were beginning to rust and needed to be fixed and I’d had a small ‘off’ in the summer which left a few scrapes and scratches (on me and the bike!). Coming home from the last 7Ws, Dawn Armstrong was travelling behind me and had to stop to pick up the heat shield from my exhaust, which had fallen off. But probably the biggest reason was that I’d been riding the SERV bikes and found the FJR an absolute dream to handle – you only have to think about going around a corner and before you know it you’re gliding round smoothly. I was beginning to realise that perhaps my riding was limited by my bike.

I don’t think I’d be able to keep up with you on an FJR, but I see you went with HD again…

I am still a dedicated HD fan – I love the rumble and there is a kind of kinship (for better or worse) between HD riders, maybe because we have to put up with so much teasing from other bikers. For me there’s also an emotional connection to the brand after I lost a friend who was a Harley rider (not in an accident I should add).

It’s true; nothing looks or sounds quite like a Harley! But presumably there were some specific features you were looking for this time around?

I wanted a tank size that would allow me to travel more than 70 miles in one go – that effectively discounted the forty-eight range – and more ground clearance. Often, on cornering, my pegs would scrape the road surface. Whilst a good indicator of whether I still had room to lean over, it tended to be a bit of a distraction.

I’d agree that most Harleys aren’t suited to more progressive riding! Which lucky dealership got your business this time then?

I visited the Reading dealer one sunny Saturday to do some test riding. Budget was a bit of a consideration as anything over £10k would probably lead to my husband filing for divorce (although I would argue that divorce is much more costly than a mere £10,000) so that discounted a number of models. I also wasn’t too sure at that stage how much I would be offered as part-exchange for my current bike.

Did you try anything else or go straight for the Iron?

I took out the 1200T, but found it rode as low as my Sportster, plus it was equipped with windscreen and panniers which added to the cost but didn’t really add to the style. I also tried the forty-eight, but the peanut-size tank just wasn’t going to be up to the job. Next I tried the Iron. It definitely has higher ground clearance than the Sportster and I felt quite comfortable sat astride it. I took one out for a ride and an hour later returned to the shop with a big grin on my face. I felt like Steve McQueen on this raw machine. Not the dream handling of the FJR but far easier than my Sportster.

Were you at all tempted by the extra power of the 1200 Sportsters?

There was a used one on the shop floor which had stage 4 upgrades fitted. The salesman seemed was very reluctant to let me take it out. Perhaps he thought I wasn’t serious? Eventually I was allowed a brief spin around the block and – to be honest – that was all I needed. I cautiously pulled out of the dealer car park and it was just as well I did as even then the front wheel was trying to lift. It was certainly peppy! It turned out to be too much really and felt as if I were riding a wild pony on caffeine.

Were they any more cooperative when you fished out your credit card?

I’d been given a trade-in price of £2700 for my Sportster and told that there was probably room to move on the ticket price of a new Iron, but I would need to come in and sit with the salesman and big bad John, his boss. They were expecting a shipment at the end of November but there was only one black ordered for the whole of the south and it was likely to go pretty fast – the sales talk was beginning to creep in but I wasn’t in a rush. A few emails and phone calls passed between the salesman and I as he encouraged me to come in to meet with John. But still there was no definitive price cut.

Then one afternoon I decided to see what else might be on offer and called the Harley dealer in Guildford. The salesman there said he had a 2016 demo Iron with just under 600 miles on the clock in charcoal. Was I interested? Within 20 minutes I had secured £800 off the full list price, been offered an additional £300 trade-in on my Sportster and the first 1000 mile service included in the exchange. £500 deposit and the bike was sold! I later mused over the fact that I had just bought a bike I hadn’t even seen – but then so had the dealer.

Sounds like a heck of a deal! But the salesman surely didn’t let you get away without selling you some accessories?

No. I added a smokey-grey windscreen and a black luggage rack to the order. Before the exchange, and with the kind assistance of the guys at Mel’s Motors, removed some of the extras I’d added over the last 3 years of Harley ownership. The weather was beginning to turn cooler so I was very keen to keep possession of the heated glove connection, in particular.

It has certainly been very cold and wet. Did you brave the elements yourself or get it delivered?

When told that the parts were in and fitted, I took my old bike for one last ride to Guildford to seal the deal. Paperwork completed and road tax paid for online, I was heading home with just as big a grin as I had experienced the first time I rode the Iron.

Sounds like you’re enjoying it!  What’s your favourite aspect of the new bike?

The digital control display, which shows revs and which gear you have selected. I also like the position and design of the handlebars which are not as chopper-like as my previous bike. Also the higher ground clearance!

I might opt for the stage one upgrade (although not necessarily with the pipes) as I’m told that might give me slightly better performance.

What sort of riding do you plan to do?

TVAM trips at home and abroad.

And so far, are you pleased with your purchase?