Ride of my Life!

My dear wife Helen won a raffle prize at a fundraising dinner early this year – a pillion lap with the Be Wiser Ducati racing team! Naturally enough, she thought of me. I didn’t try too hard to persuade her that she, rather than I, should take a ride with an athletic young man in racing leathers.

Each team has two riders, and this year the Be Wiser Ducati line-up was, the reigning champion, Shane “Shaky” Byrne, and Glenn Irwin. Very sadly, Shaky was seriously hurt while testing his bike at Snetterton in May. He sustained multiple spinal fractures and broke a lot of ribs, amongst other injuries. I met him on the Sunday and he was in good spirits, fully mobile, but not able to ride for the time being. He has won the British championship six times, and it will be a great loss to the sport if he cannot return to racing. Glenn’s brother Andrew Irwin has stepped into Shaky’s place for the 2018 championship. It was great to see all four Irwin brothers together at Silverstone for the fixture this weekend. I took the picture opposite of them on the grid before Glenn’s second race, with a podium finish.

So my rider for the pillion lap was Glenn Irwin, currently holding third place in the Championship. It was my first pillion ride since I was 14 years old, which was also on a Ducati, with a friend’s dad, and it turned out that it was Glenn’s first pillion ride as well. Unfortunately for him, my weight is half that of the Panigale v4s road bike that we did the lap on.

I was understandably nervous before the race, but just put it out of my mind, telling myself that these guys do this for a living, week in week out, it’s in their blood. An hour before the lap, I retired to the team trailer to squeeze myself into brand new racing leathers. This felt like an all-over corset. Helen told me it was very flattering! We ventured out into the pits and watched the two race bikes being lovingly prepared while the road bike was wheeled out for the pillion lap.

Amid much excitement, Glenn took off on the Panigale to warm it up for the pillion lap. A few other teams were offering pillion rides as well, so there were half a dozen bikes on the grid. With the eagerness of a man ascending the gallows, I attempted to hop lightly onto the Panigale’s pillion seat, which is the size of a postcard and mounted absurdly high behind the rider. Several mechanics held onto the bars to help Glenn steady the bike while I climbed aboard. Glenn said something incomprehensible, followed by “Enjoy the ride”, then set off on the lap. 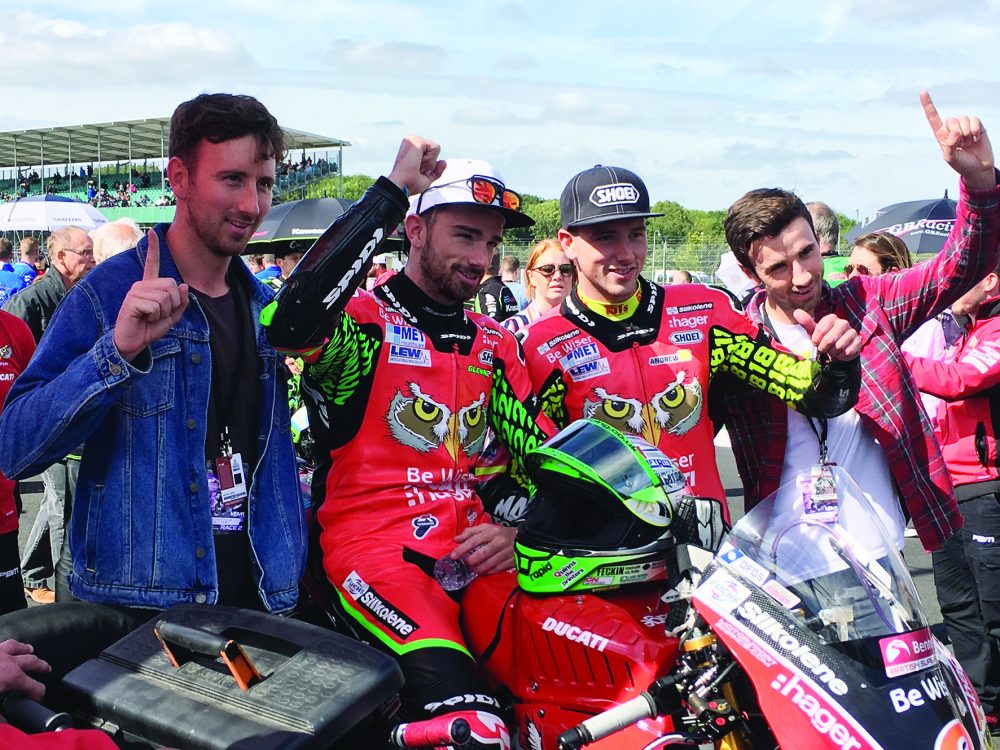 Helen wondered why I was bobbing up and down as if I were riding a pogo stick rather than a Panigale. That’s because Glenn wheelied the bike in every gear on the approach to the first bend. I wasn’t conscious of any difficulties up to this point because my mind was still on the grid, waiting for something to happen. Things changed rapidly as we pulled onto the first straight, when one of the BMWs shot past on the outside – obviously a slimmer pillion. This was a red rag to a bull, and Glenn hit the power band with immense gusto. I don’t know what I was shouting, and Glenn certainly couldn’t hear at 150 mph, but I was simply unable to maintain my grip around the rider’s waist. He sensed that he was losing me and eased off the throttle before we came to the second bend. I was very conscious that I had nearly tumbled down the Silverstone tarmac and now managed to interlock my fingers around Glenn’s sternum, in a high speed version of the Heimlich manoeuvre.

The second bend was smooth and seamless, a testament to the peerless racing ability of these Superbike champions, but the longest straight was brutal as we pursued the BMW into the left and right Brooklands hairpins. The transition from full acceleration to maximum braking was instantaneous, with my knuckles pressed against the tank so hard that they were bruised the following day. Again, Glenn’s progress through these bends was incredibly smooth, with the black and white trackside strobing past my helmet. As we came out of the right-hander, Glenn laid the power on for a final blast before braking into the grid. I managed to step off and shake his hand, thanking him for the most amazing experience and explaining what happened on the first straight. He said he knew I was in trouble so he eased off to help me. I could not be more grateful for that kindness!

The team had warned me that the G-forces during cornering would strain my neck, but that was not the case. The only strain I suffered was to my right arm, clinging on for dear life, inflaming the muscles and requiring Ibuprofen for the ride home on Sunday evening. The v4s Panigale has 214bhp, and Glenn had unleashed them all at once – what else is a champion rider to do? We completed our pillion lap in 90 seconds and the fastest championship laps were 54 seconds, proving the impact of power-to-weight ratio in racing. 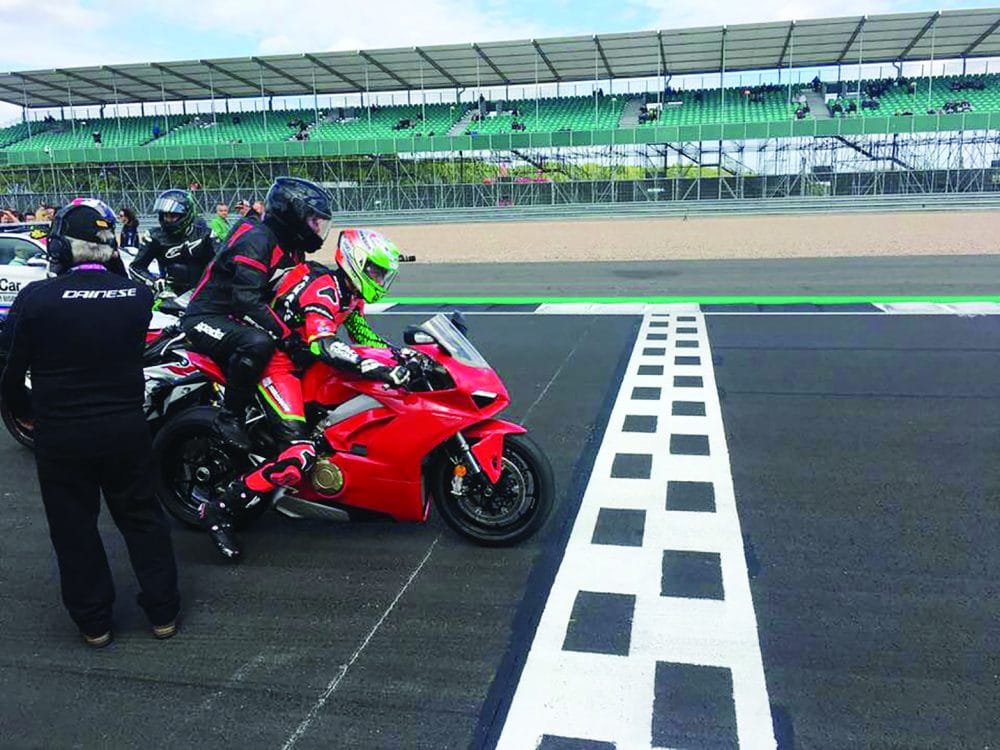 The more decisive factor in the Superbike championship is raw courage. These riders commit their all to every lap, riding hundreds of laps during each fixture and ninety of those during actual racing. Things happen so quickly out there, they can be off in a split second. Mostly they get up and walk away but, occasionally, a rider suffers injuries like Shane did, or worse.

After the pillion lap, Glenn was free to relax and compose himself before the race. The atmosphere in the team garage was monastic, as the mechanics conducted final checks on the bikes. A quarter of an hour before the warm-up laps, the engines were fired up and kept running on tickover. The wheels were brought out, in their heating jackets, and plugged into generators to keep warm. Glenn and Andrew sat in silence, contemplative, putting their minds in the right frame for racing.

Suddenly it was time to race. Wheels were fitted, jackets removed from heated tyres and the championship bikes rolled into the pit lane. Glenn and Andrew jumped aboard and with little fuss, rode out onto the warmup lap. After this, the wheels were changed on the grid to give maximum rubber for two more practice laps and thirty race laps. There was a mandatory dalliance with press and VIP visitors, including yours truly, before the grid was cleared and the race began.

We watched all thirty laps with the Be Wiser team on a screen in their garage. The atmosphere was electric, the pits silent until the riders roared by. There were moments of high anxiety, as bikes came too close together in the bends, and pure exhilaration as Glenn climbed the ranks from ninth to fifth position. Unbelievably, a blown BMW engine took out one of the riders and the resulting oil spill deposited two of the race leaders beside the track. Glenn took a different line, avoiding the oil spill, and claimed third position. After some deliberation amongst the judges, the result was upheld, and Glenn joined the winners on the podium for the obligatory champagne fight. It was interesting to see them chink their magnums together in a winners’ toast but not a drop passed their lips, as the final race awaited them later in the afternoon.

While the riders engaged in gladiatorial combat to hold their place in the race and climb the rankings between races, my abiding memory of the day was of lovely people pursuing a hobby where everything has to come together with surgical precision for each performance. The winning riders take the prizes, but each member of the team takes pride in, and gains purpose from, their part in the race preparations. When that part is done, they stand and watch on screens in silent admiration, waiting and hoping for the result they crave.

Sadly it wasn’t to be Andrew’s day, as he slid off on the left-hand hairpin early in the day’s final race, and had everyone’s sympathy as he walked back to the pits. This weekend’s racing was a success for Glenn, however, as he held his place in the last race and retained third position in the Championship going into the Oulton Park fixture next weekend. I shall be following his career with newfound interest, and my pillion lap with this champion rider has given me a new sporting interest! 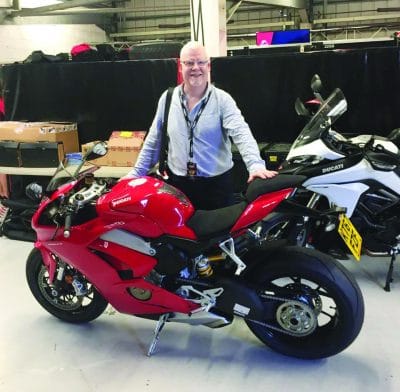 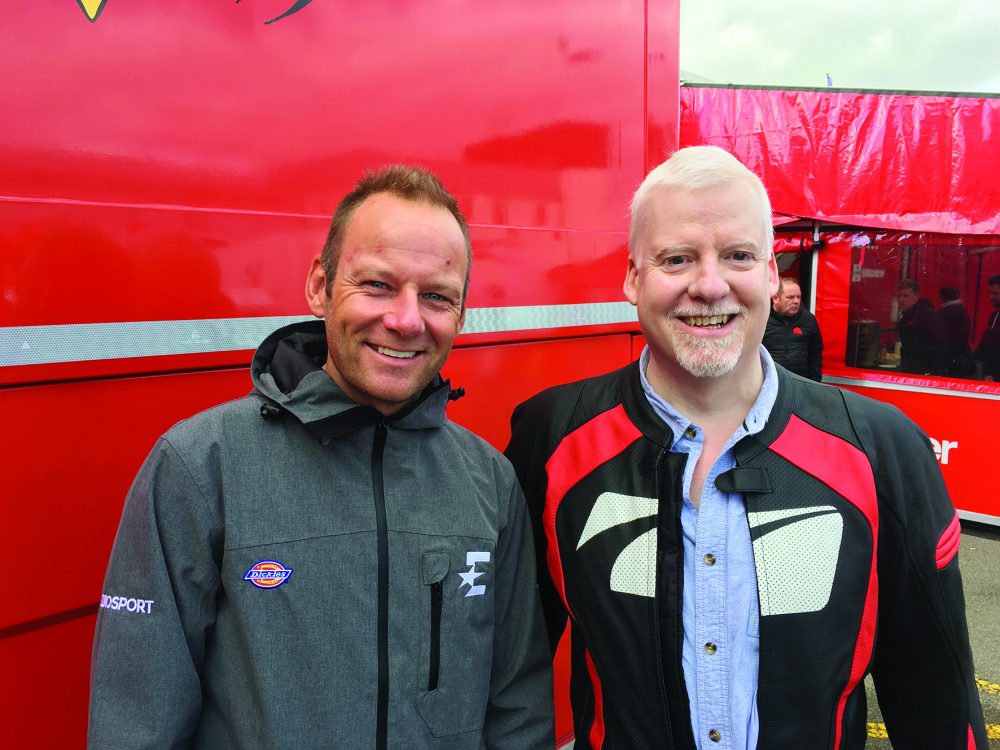 To get a little flavour of what this trip is about, what follows is the story of the September 2008 […]

What Not To Wear

Hot summer days; I love them.  It must be five years since we had some repeatable dry, warm weather when we […]