Stef and I have completed the rally on previous occasions, on our own and with other people, and we completed the 20hr rally in 2017 with Andy McWalter. This was Hev’s first time riding in the event. I appreciate that many of our members have also taken part as individuals or formed small teams of between 2 & 4 people. TVAM members have traditionally done well in the rally with ‘Thame Village Idiots’, AKA Si Rawlins, Chris Bowler and Martin Cragg, regularly winning the overall team event for many years. Si also tells me that a TVAM member won the overall individual award a few years ago.

I should explain what the NNR entails. The quote direct from the NRR website is, “the National Road Rally is a navigational scatter rally organised in conjunction with ACU and the BMF. The event is not a race and each rider follows their own route, visiting different controls around the country, the only time stipulation is that riders complete their route in the allotted time. The number of controls each rider visits will depend on the award that they are competing for.”

Traditionally there are thirteen award categories that riders could compete for: five daytime awards; three night-time awards; three 20hr awards; and two 20hr awards with special assessments involved at the start of the rally. The different awards were calculated based on start times and total points or distance travelled between controls. The matrix gives you a number of points between each control, ranging from 20 to 50 points and these are what you’re credited despite how far you actually travel. It’s worthy of note that you can only arrive at a control that is linked by the matrix to your previous control. For example, we could travel from Sherfield On Loddon to Winchester to Horndean because they were linked, however we couldn’t go direct from Sherfield On Loddon to Horndean because they’re not linked on the matrix. 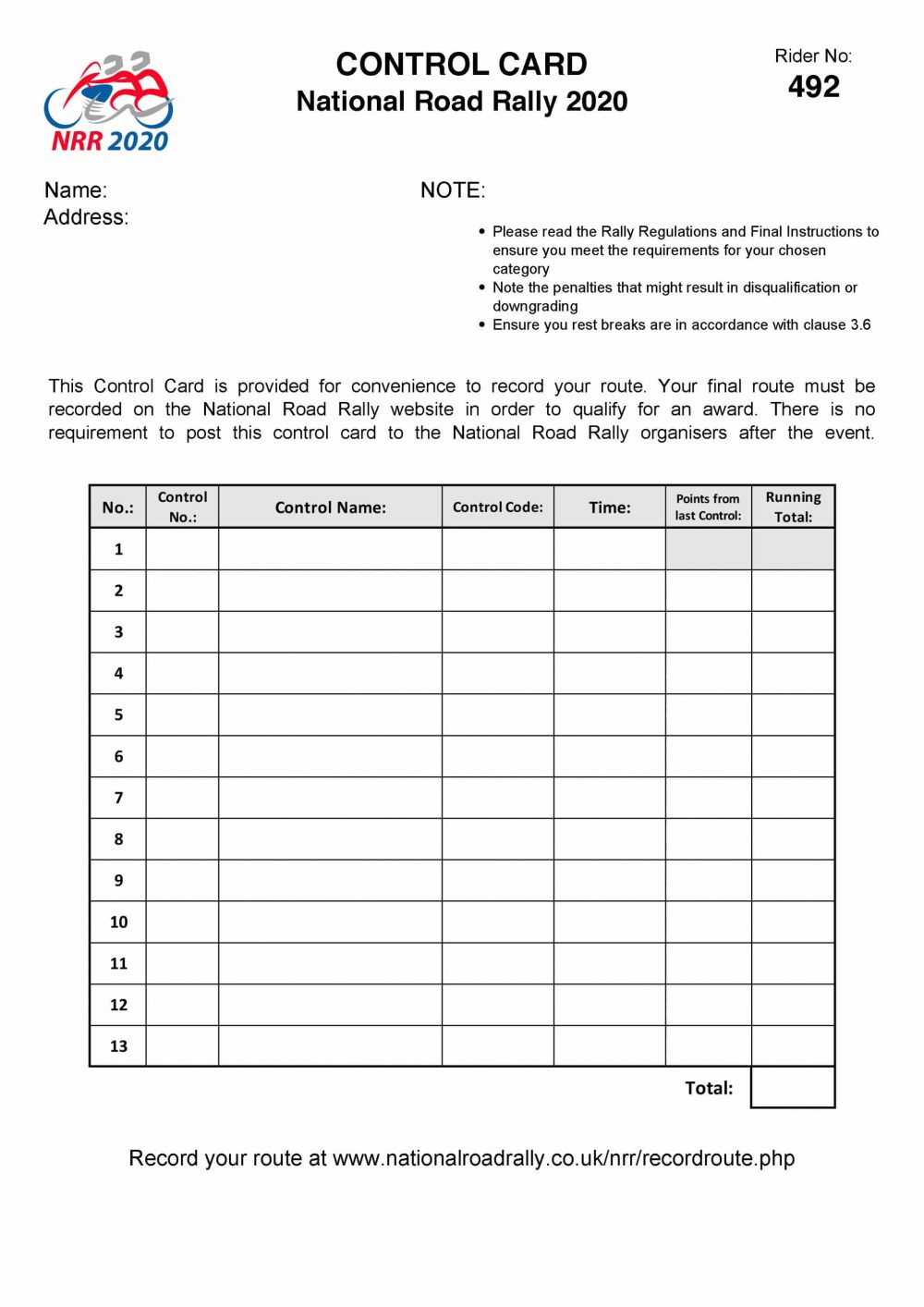 We arrived at Reading Harley Davidson at Winnersh Triangle at 08:45 ready to get on the road and have a fun day out riding motorcycles around the countryside. Stef had already plotted the route, using the matrix to create a circular route, meaning that our first and twelfth controls would be Winnersh. Leaving Harley Davidson at 09:00 we knew that we had an unpressured 11hrs ahead of us. The stops that you have to comply with, a minimum of 45mins, happen naturally with re-fuelling and eating so the biggest challenge of the day was avoiding the largest roads whilst still meeting our target of finishing by 8pm.

Stef led us on the first leg to Sherfield On Loddon, a lovely, twisty, typical-Stef road, with the odd emergency stop to avoid him going past the goat track he intended to take next! Plenty of gravel on the road but at least no fords on this occasion. We arrived at the control postcode to find that the old garage had been turned into a hair salon. No use at all to Stef and I and even Hev didn’t appear that impressed. On consulting the control details in our rider packs, we found that the garage was still in operation at the back of the salon. A quick walk down the side road and we found it.

In previous years each control was clearly visible, often with a gazebo and people gently beckoning you over to them with the concern that the average rider cannot see a huge tent in the middle of a car park! This year, due to the current restrictions, each control consisted of an A4 size fluorescent piece of paper with the NRR logo and a six-figure control number written on it with a black permanent marker. Unfortunately, not all of these pieces of paper were located in the most obvious position.

We advanced sort of people with our sharpness of observation should have found these easy to spot, or so you would have thought! Ok, we got there in the end and noted the control number and time on our control cards. We were awarded 20 points for the first leg.

We switched leaders and I led the next leg to Winchester, taking in the A33 to Basingstoke and then the B3046 through the Candovers before picking up the A31 to Winnall, Winchester. Stef and I knew this control well, as it’s a regular on the rally.

After a short stop we continued south-west to Totton, which is as far south as we went before heading north-west to Amesbury and Countess Services. Yes, the controls are often in the most beautiful locations! We made this our lunch stop, with a baguette from Subway, and spent about 45mins chatting whilst sat on a nice grassy spot at the back of the services. As I said, there was no real pressure on time and we needed to ensure that we remained fresh throughout the full day’s riding.

Our next leg took us west to Warminster and, as the A303 was congested and uninspiring, we headed north to Durrington before turning west through Larkhill, Shrewton, Chitterne and then picked up the A36 to Warminster. The control was in the services and, struggling to find it, we headed around to the filling station to fill the bikes. Sure enough there was the control poster, stuck on the filling station window.

From here our route took us north through Devizes, another control, and on to Cricklade our 8th Control point. The controls and points were ticking by nicely. From Cricklade the route went through some of the nicest countryside the west of England has to offer, the Cotswolds. We went west through Ashton Keynes and past the Cotswold Airport on our way to Nailsworth, our next control. The control here was at the Weighbridge Inn, the regular place for the control point for the rally and a lovely little pub that I could imagine was heavily frequented by locals eating and drinking in normal times. From here we turned north to pick up the Cirencester road (A419), bypassing Cirencester and crossing the A417 at Quarry Junction. We worked our way east until we picked up the B4425, a fantastic road that cuts through the Cotswolds to the beautiful village of Bibury. We continued north-east along the B4425, through Aldsworth and up to join the A40 at Burford. 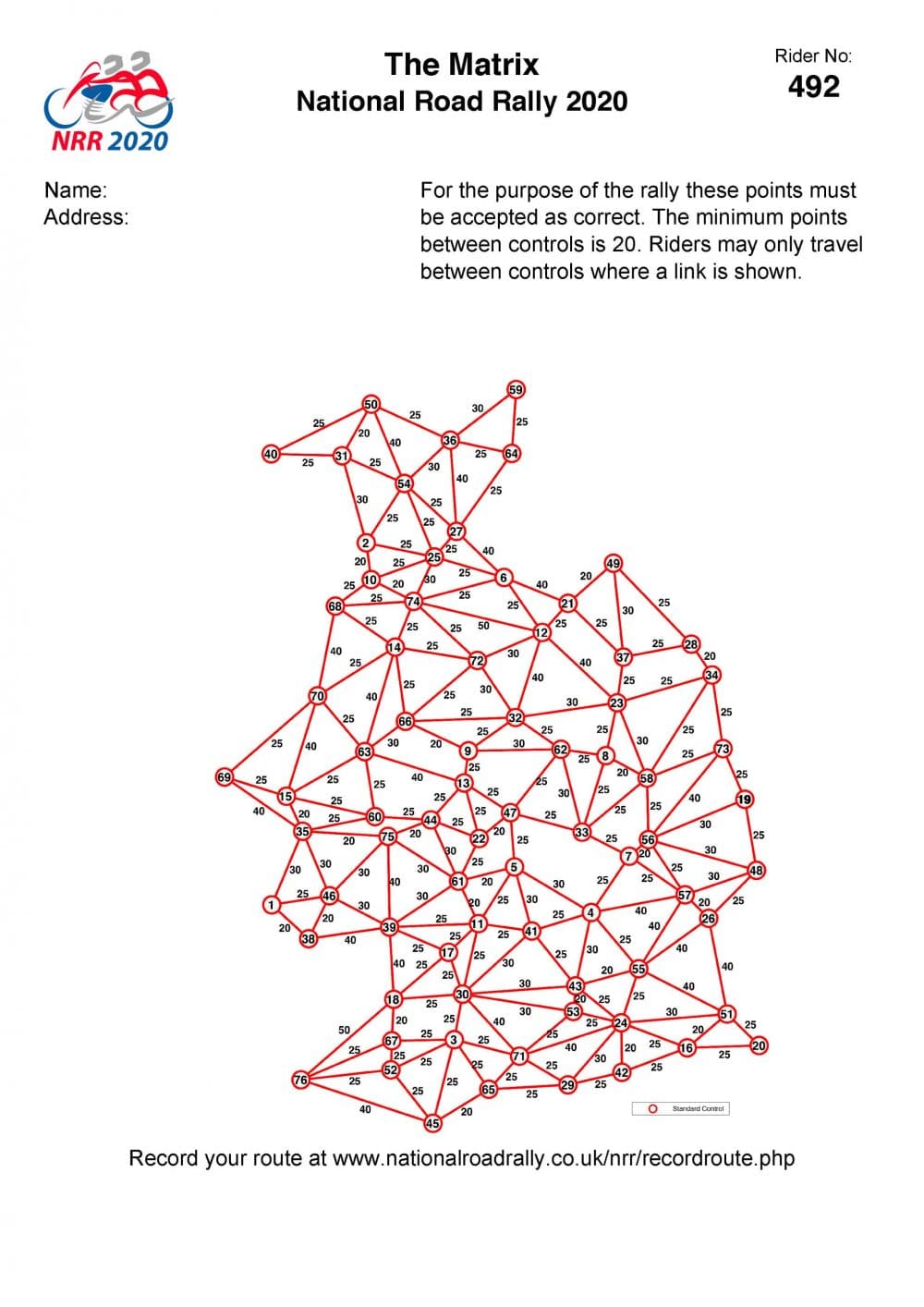 The A40 was busy, as we were now late afternoon, and Stef decided to take a short detour, basically the wrong exit, off the roundabout with the A361 that landed him up a dead-end. He realised as he looked to his right to see myself and Hev riding slowly along the A40 laughing! A kind couple stopped to let him across the path to re-join the A40 heading towards Oxford. It wasn’t long before we turned down to Carterton our 10th control point. We couldn’t avoid a few extra minutes laughing at Stef’s error a few miles before! We only had two control points to go now and plenty of time on our side.

We headed south past Brize Norton and down to pick up the A417 at Stanford in the Vale. At Challow we picked up the B4001 and headed down to Lambourn and on to Chilton Foliat before picking up the A4 at Hungerford. We had to head towards Marlborough on the A4, as the control point was at Froxfield. With about an hour and a half left, we set out east to return to our original control point in Winnersh, taking the A4 for much of the route to Theale before heading across to Burghfield, Grazeley, Three Mile Cross and Shinfield. We arrived at Winnersh shortly after 7pm and, having completed all twelve control points, accumulated 270 points and done it all within the 11hr timeframe, we achieved the gold award. Our total mileage was just under 300 miles for the day.

We then had to log the controls we visited, the six figure control numbers and the points between the controls onto the NRR website in order to gain our award.

The day worked well because we had three riders that worked well together. We changed the leader for each stage and made sure that we rode to the standard we’re known for in TVAM. We stopped regularly to refuel ourselves and the bikes and generally kept the day light-hearted and relaxed. We didn’t push beyond our comfort zone and, if one of us saw something from another rider that we weren’t happy with, we stopped. 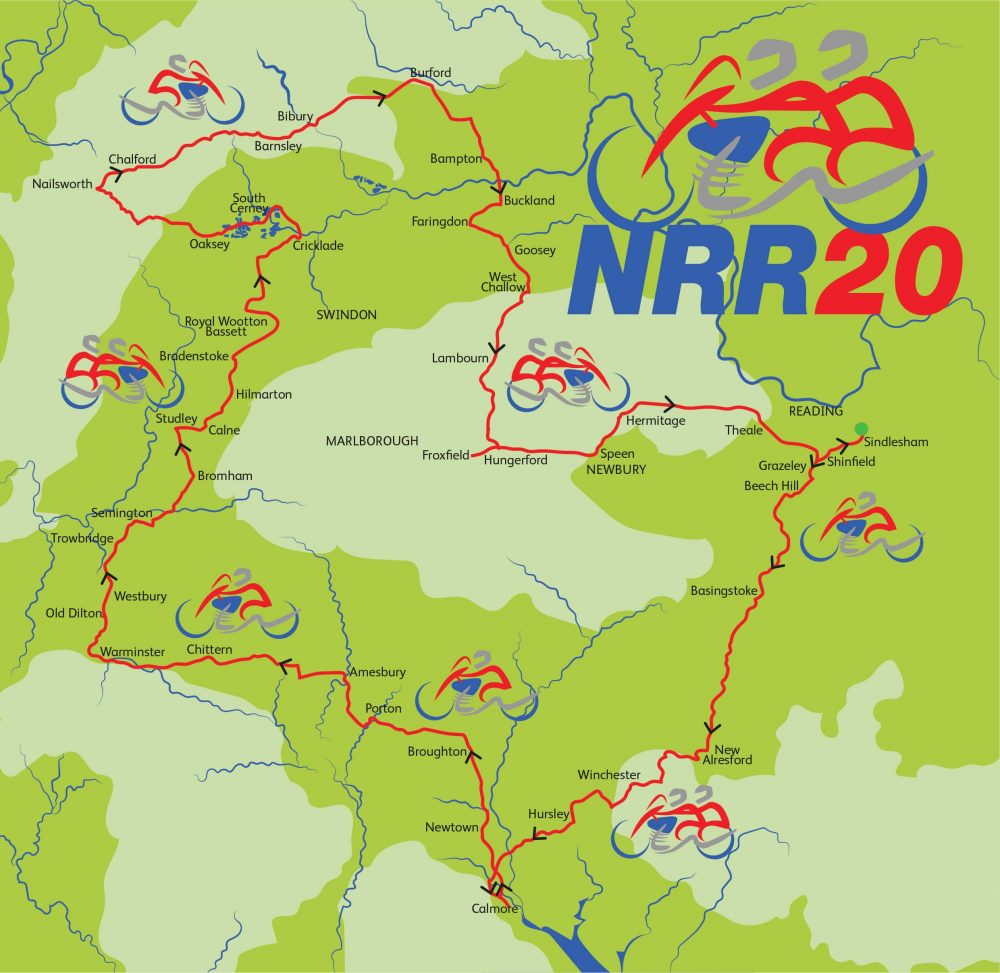 Hopefully the 2021 event will be back to the more normal event with manned controls and plenty of fun interaction with the great people that look after those points across the country.

If anyone is looking for a fun day’s riding, then the 2021 event is planned for Saturday 3rd and Sunday 4th July.

Part One – How it all Began Firstly, let’s get the introductions out of the way. My name is Jon […]

This is one of a series of articles on advanced riding techniques that appears in the Club’s monthly magazine, Slipstream. […]

Triumph has been around since 1902. In its heyday the company was one of the world’s most successful motorcycle brands, […]