My Welsh Weekend – Lessons to be Learnt

I’d been looking forward to my Welsh trip (led by Dave Parsons) since I’d booked it and, as with most bike tours and trips, we were counting down the days to the event. There were 16 names down but a few were making their own way up, so 12 of us met at McDonalds Calcot, Reading at 9am. We were all excited, fed and hydrated and so, with all present, we decided to leave earlier than scheduled.

We were on our merry way. Dave Parsons took the lead with Simon Wheatley as back marker. Most of us had the routes on our satnavs which Dave had shared through MyRoute-App. This was great, meaning that in case of separation most of us had some idea of where we were going. It was a leisurely ‘B’ paced ride with a few overtakes within the group. Vance Williamson had picked up a brand new Honda with around 20 miles on the clock; the tyres were lovely and shiny and he was running it in.

The weather was great. It was warm and sunny, just what you want for a Welsh trip – none of that wet stuff. We had regular stops as it was getting warmer and warmer and, after covering around 165 miles, made it to Wales incident free then checked in at the Metropole Hotel. We dumped our gear in our rooms and then most of us headed back down for an evening ride of around 70 miles. A few stayed behind.

We left the Metropole at around 5.30pm and within a few minutes were in the twisty roads of the countryside full of nationals, sheep and beautiful scenery. However, within about 10 minutes of riding things weren’t going to be quite so rosy and pleasurable for me.

I made an overtake within the group on one of the straights passing two of the riders. I was in my element. I’ve ridden in Wales many times before and had no reason to be concerned of anything going wrong. By now I was a good 10-15 seconds ahead of anyone behind me. I approached a sweeping left-hand bend. I didn’t feel that I was going too fast, there was no panic braking, I was comfortable. I was following the arc of the bend when I suddenly found myself on the opposite side of the road mid-bend. The fear that tore through my body knowing I could potentially be struck by an oncoming vehicle was indescribable. In a split second I switched that fear into ‘FIX IT, you fool’. I pushed hard on the left bar and put the power on. The bike started to come back but sadly that simply wasn’t going to be enough on this occasion. There was such an adverse camber in the road and the bike was cranked right over. You can only expect so much from a front tyre. The tyre let go, and I low-sided. 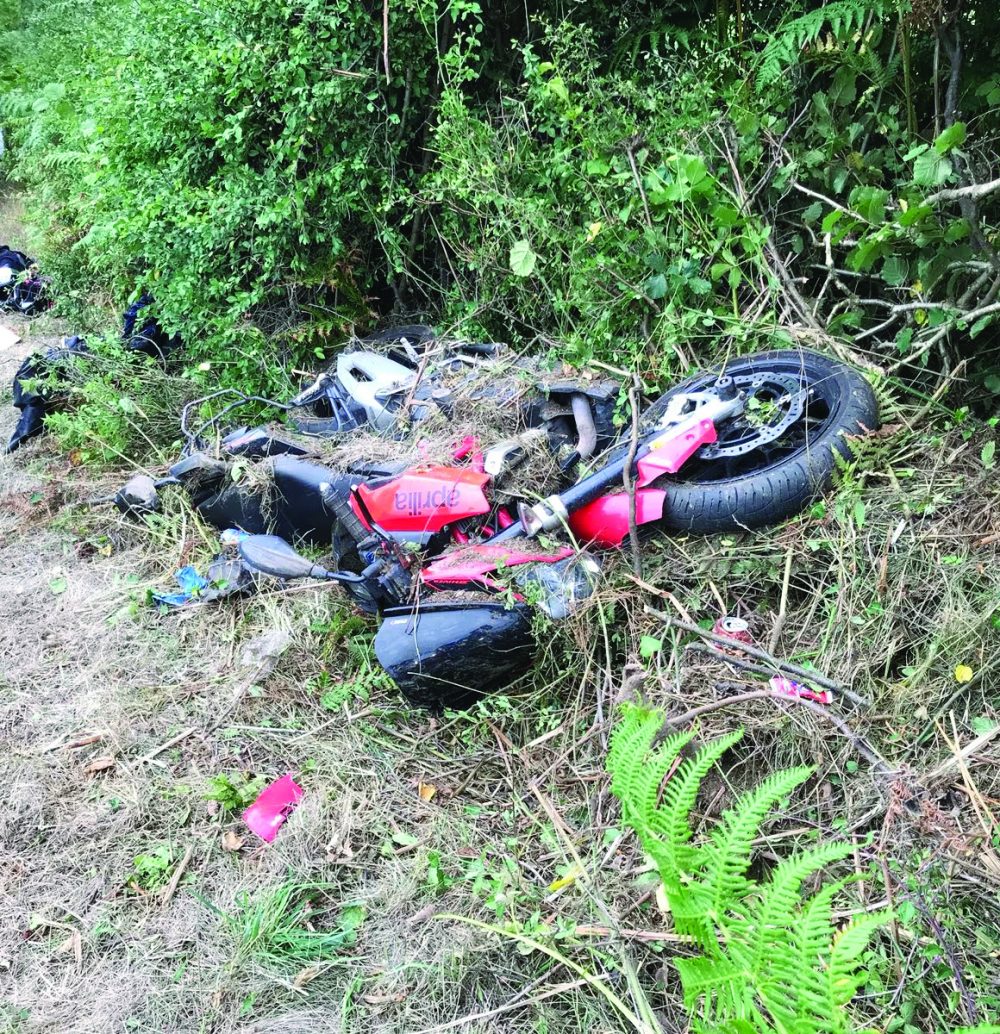 I went down on my left shoulder and slid across the road to the opposite verge. The bike slid behind me, also heading for the verge. I almost came to a stop, but as I went to stand to leave the road I was suddenly struck hard in the back by my own bike. The impact was so severe that it flipped me from facing forward to facing backwards and upside down. The bike came to a rest 2 metres or so away from me facing the opposite way that it had gone down and now laying on its right side, having initially gone down on its left. The bike struck my left side, breaking most of my left ribs in multiple places. The impact also broke my shoulder blade in two places, punctured my left lung and caused a couple of breaks in my right thumb. I was so badly winded that I was gasping for air and in a panic.

The road itself had such an adverse camber that 3 riders rode by without seeing me. A fourth caught a glimpse of something red (my bike, not blood) in the bushes and slowed down, looking back to see me in the road. Eventually the other riders headed back to the scene. I was gasping for air. As most of you who ride with me know, I always wear a neck tube up to my nose, this was restricting my airways (mouth and nose) and with a broken shoulder on one side and a broken thumb on the other I couldn’t pull the tube down. It was also trapped in my lid strap. I was frantically trying to pull this down when help came. I was able to breathe but now the lid was not helping. Nobody was willing to take the lid off, so I asked it to be unstrapped and then forced it off with my forearm. To me, air was now more important than neck injury, besides I knew where the impact had been and was pretty sure I had no neck problems.

I lay there for a bit gasping – it felt like around 3-5 minutes – then I was surrounded by voices. I was blessed to have had 4 passers-by stop who were medics. There were 2 anaesthetists, 1 military medic and a trainee doctor. The military medic took charge. He did some quick checks and could see that things weren’t looking too great for me with my ribs and shoulder broken. It was a warm evening and now I was sweltering in my gear. The trainee doctor had a medi kit with him and asked if I wanted him to cut me out of my gear. I replied that I didn’t really want to cut it off but he pointed out that regardless it would be cut off before I got to the hospital. Some of our guys said that the gear had done its job and was totalled. I couldn’t handle the heat anymore so accepted the offer. The trousers and jacket came off. It was such a relief and the mild breeze helped calm me down as my focus was diverted to relaxing and waiting for the ambulance. Lying there I could see the shock and the concern on the faces of my fellow riders.

The police, firefighters and ambulance finally arrived but time became surreal and I lost concept of it. It felt like the ambulance arrived in about 10 minutes which I thought was really quick. I was told later it was 30-40 minutes before its arrival. Calling for the ambulance had proved a bit of an issue. Mobile reception was limited and a few had to walk up the hill to get reception. Knowing the name of the road was another problem but thankfully locals had stopped and supplied the information. When the paramedics arrived they took control of the scene and gave me some morphine to ease the pain. Although my gear had been cut off this apparently wasn’t enough, they kept going with clothing removal. My t-shirt and underwear were cut off with firefighters holding up a screen to shield my dignity. I did get to hospital with my socks on though! 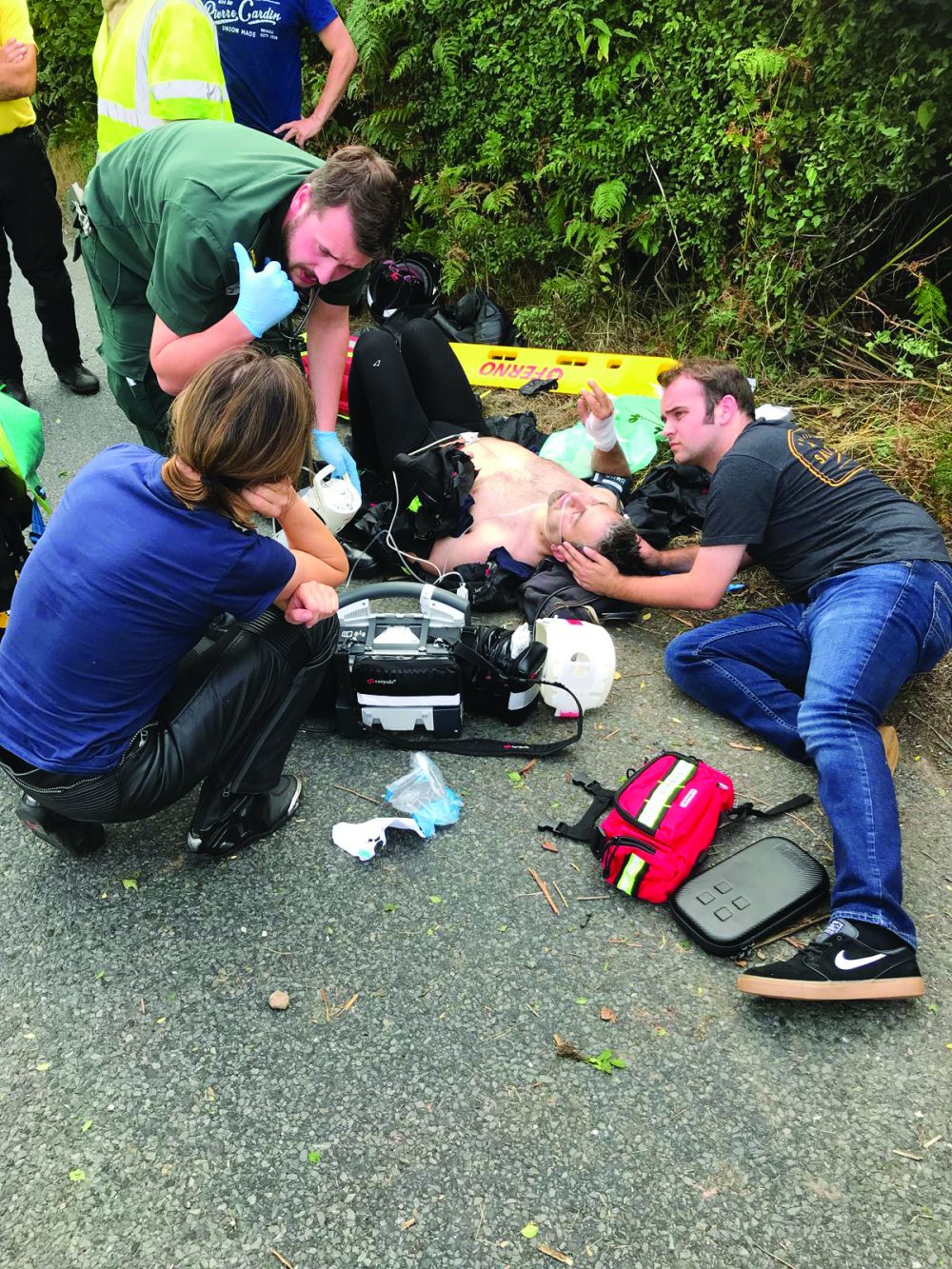 Whilst I was being attended to on the side of the road, a sudden commotion broke out behind me. I looked back and saw that Dave Parsons and a few others had jumped onto a police car stopping it heading down the hill with its handbrake off. It wouldn’t have hit me directly but it could have caught my arm, one of the paramedics and then my ride, the ambulance.

I was very dehydrated but was told I couldn’t have any water until I got to the hospital. Upon arrival it was like a scene from a TV show – medics everywhere. I was sent for a CT scan – they confirmed, “You’re pretty banged up” and I spent over a week in Nevill Hall Hospital in Abergavenny. Although I was the only one involved in this accident it affected a lot of people: myself, the guys in the group ride, the locals and passers-by, the police, fire and ambulance service, the hospital staff and my family and friends.

So what happened? I feel that I’m an accomplished and capable rider, so what led to this mistake? So I need to backtrack to before the event. I own and run a busy and successful garage and I get extremely busy at work and on average work between 10-12 hours per day. I work on my house over the weekends and some evenings which doesn’t leave a lot of time to rest. The night before I had been working on my bike getting it ready for the trip and that day had worked 13.5 hours. I got home late, bed late, up early, out early. It had been a long and hot day’s ride to Wales. Then we ventured out for an evening ride. The excitement kept me going and I think that having ridden in Wales many times before made me overconfident.

Speed was the primary factor. This gave me no time to react or correct, I had no limit point of vision to work with. Add to that the cocktail of fatigue due to overworking and riding all day in the heat and being dehydrated. When coaching on track days I encourage people to drink, drink, drink, and I had a full bottle of water in my tank bag untouched. There was no one thing that caused this rather a mixture of things. Always self-assess.

How’s my bike? People have asked about the bike. It’s in better condition than me. Apart from a few scrapes and marks, I didn’t break any levers, mirrors, pegs or gear and foot brake levers. The bike is still rideable and in one piece. 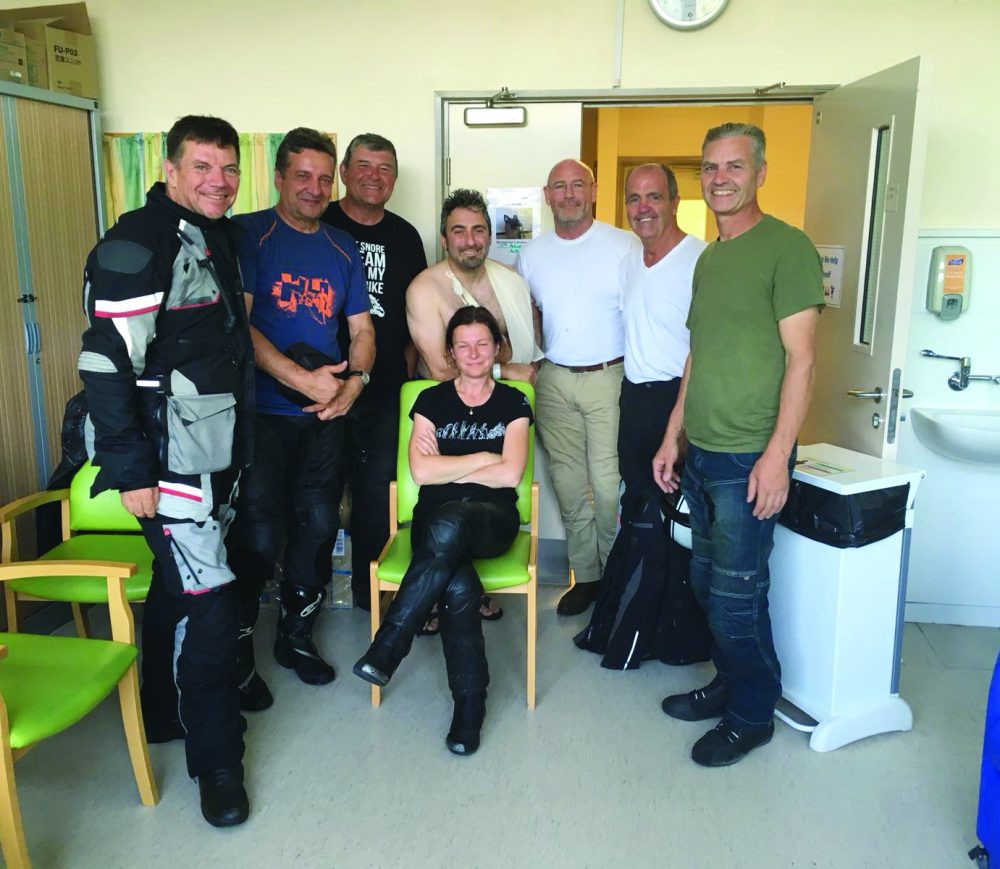 A Change of Seasons (Part 2)

This month Nick Tasker reviews the other Italian bikes that warrant some page space, along with the rest of the […]

An absolute winner on paper; can the reality live up to my expectations? Now here is a bike I’ve been […]