It’s a Sunday morning in early November when everything’s suddenly tinged sharp white and it’s official – summer’s gone. The Ducati rattles as I watch her clocks reflecting engine and grips warming. It was my sixtieth a couple of weeks ago and Associate Pete persuaded me to celebrate. Over beer, we decided to visit the London Motorcycle Museum. It’s a place I’ve tried to visit before. In Greenford, West London, an hour away, a year or so ago I’d thought it well placed for an impromptu mid-week trip. On arrival the Closed sign had starkly dashed my presumption of normal working hours. This time though we took eccentricity into account. Minimal research showed only three days a week available to view what we’d heard to be one of the best local collections of old British bikes. We hoped a Sunday wouldn’t find the place too packed. Pitching up around 11 we rolled onto a large gravelly grassed car park, empty bar a car or two. The address is Ravenor Farm and in the 1920’s a farm it was, old barns and stable block reminders of less industrious times, swamped now by the bland modernity of dreary, inexorable, busy London sprawl. These days host to remains of the British bike industry, the museum was set up in 1997 by Bill Crosby, a long since retired London bike dealer who, from 1960 to 1973, hoarded a variety of choice machines. Some 150 are on display here, along with 50 or so other machines loaned by other groups, and it’s a stunning collection.

Pete paid our entrance fee – very reasonable as I’m now a senior, so I headed first for the outside loo at the back of the barn. I made it as far as a pretty little BSA Fury from 1971. There weren’t many of these about then and today they’re rarer than a chilled Trump voter. A 350cc overhead cam twin that could’ve beaten the Japanese at their own game, and this one is in lovely condition. Tearing myself away I’m confronted by a two-wheeled monster with the engine of a Mini Cooper and the frame of a scaffolder. The 1985 Austell, built in Maidenhead, probably best left there. I retreated outside, not least to avoid my straining bladder demonstrating the likely outcome of an Austell rider’s first corner. Returning relieved, Bill himself was in the tiny ‘Derek Minters café’, actually more a kitchen at the back with cabinets full of the racer’s trophies and leathers along with a couple of benches, some packets of crisps, biscuits and a fridge full of chilling cans. As we nursed cardboard cups of instant coffee Bill gave us the history of the museum, from its heyday on other sites in the 1990’s to the sad decline it’s now suffering due to the loss of grants and subsidies. It seems he’s actually having to sell bikes to pay the rent and I was shocked, though perhaps I shouldn’t have been given the equally shocking absence of any other visitors. 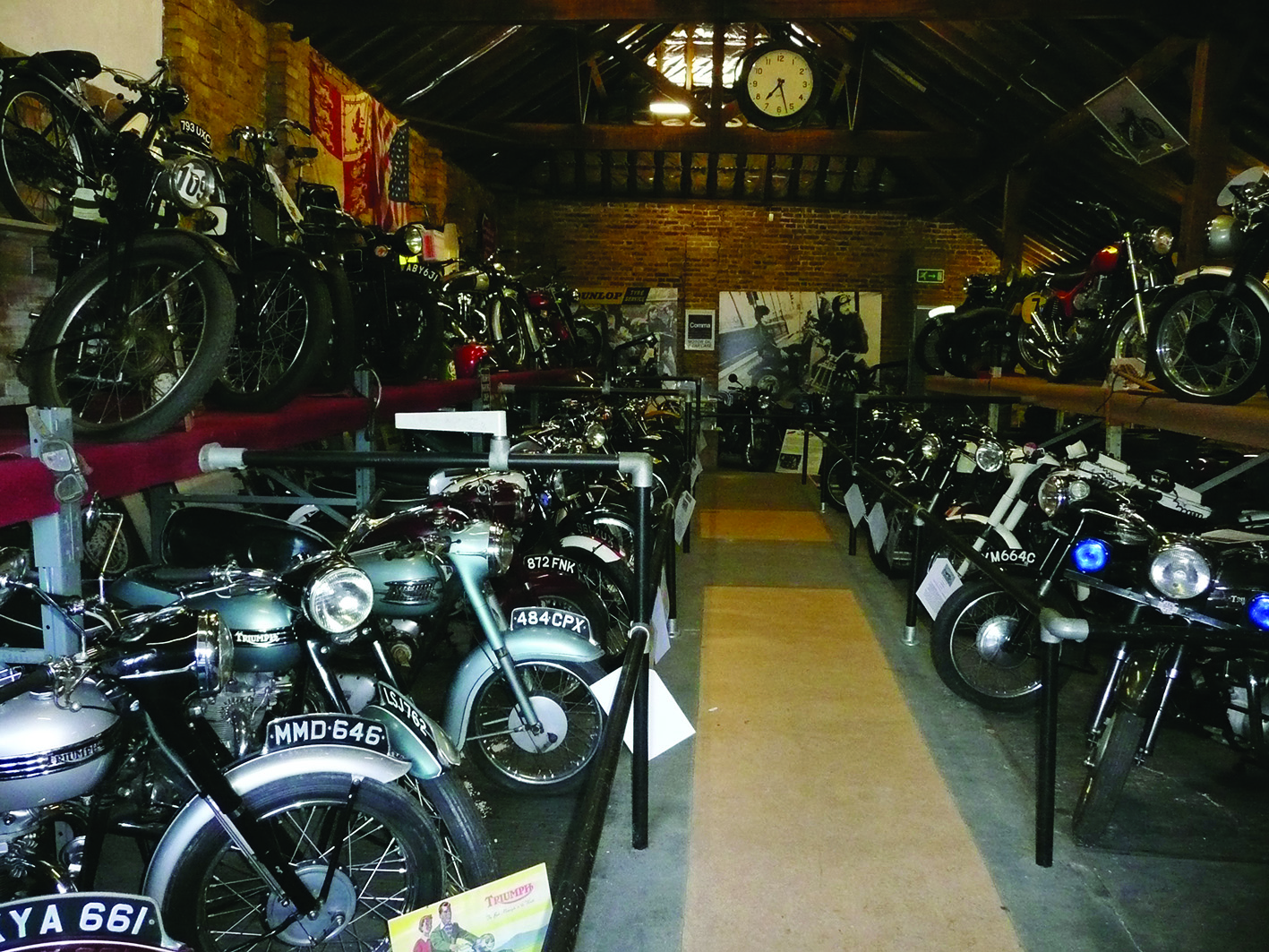 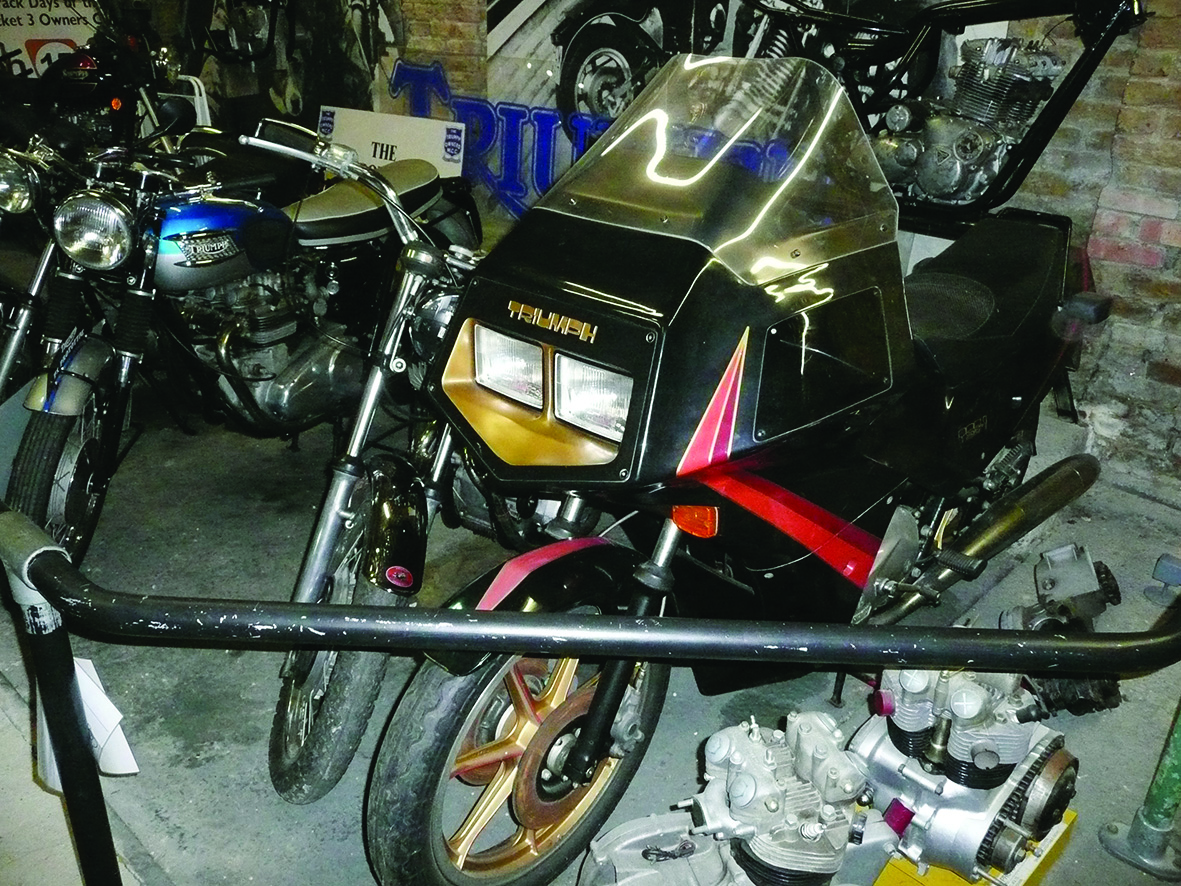 Once warmed through, Bill handed us over to James, a younger member of the family who’d just arrived on a characterful (read ‘oily’) 1960’s Triumph twin. He led us first to the restoration shed and oh my, there must have been a couple of dozen bikes sitting there in various states of disarray, from a trio of 1960’s supercharged Triumph racing combinations to a 1982 Thunderbird round the world outfit. We wandered amongst the machines, free to caress the patina of fading paint, flaking chrome and decaying seats, all to James’ running commentary covering every vehicle’s story. A couple of scooters, some drag racing trophies from 1964, an ancient and unique Triumph single in the middle of a rebuild, all with a story he was proud to relate.

Most poignant to me was a 1977 Jubilee Bonneville looking very sad and corroded with just four miles on the clock. It was the same age yet a lot more valuable than my non-Jubilee version and the perfect justification for her current storage in my dining room. Next was the dedicated Triumph barn. James told us it held the biggest collection of old Triumphs in Europe, possibly the world, and yes, there are lots. And lots. From a 1905 500cc single to Bruce Anstey’s 2003 TT winning Daytona via an X75 Hurricane, a Slippery Sam Replica, a genuine Thruxton Bonneville, racers and flat trackers, customs and police bikes, all on accessible display, mostly in very good condition. There are rare prototypes, including the 1965 P1 triple (basis for the Trident, arguably the world’s first superbike), the 600 Daytona, the 1947 magnesium TRW and an overhead cam Rocket Three. 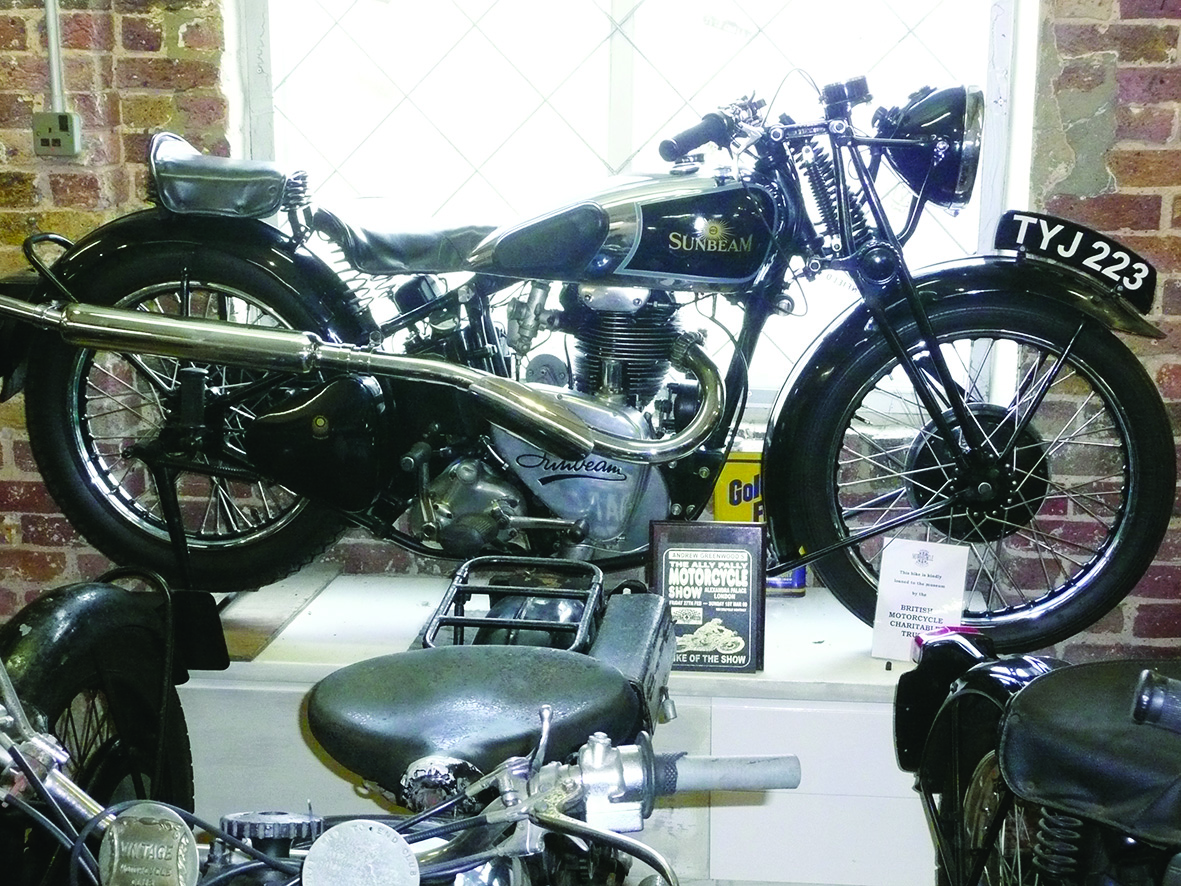 A bonkers but beautiful hand-built 1500cc V6 engine engineered from a pair of Trident lumps lurks in a corner, alongside a complete 1964 TR6 police bike from the Met’s Hendon workshop, carefully cut away and mounted on an electric rolling road showing the engine, suspension and gearbox internals in action at the press of a button. We were treated to Tritons, show and racing prize winners, the ugliest 1970’s ‘styled’ Bonneville you’ll ever likely see, the odd US style custom and the very last Bonneville to leave the Meriden factory.

The variety is stunning, it’s a slice of beautifully preserved modern history that James knows intimately and is delighted to share. Drinking in that lot took a couple of hours and via another cardboard cuppa it was back to the first hall. Here there’s a much more eclectic collection. Amongst them is a 1923 Wooler 350 from a long gone local motorcycle manufacturer, a gorgeous pre-war Sunbeam, a stately Brough, a racing Velocette, a couple of Vincents and various BSAs, not to mention a Coventry Eagle, an EMC, the original Dads Army ARP combo, a Royal Enfield that reached Antarctica and stacks of memorabilia, including period posters, articles, advertising and clothing. Most close enough to touch and all with personal commentary, any question expertly fielded by James or his mother, who had abandoned the boredom of the entry desk to join us. That was another hour gone, and in the whole time we’d been there we’d seen no more than three or four other visitors, most of whom seemed to be friends of the owners. We bought a few souvenirs and, peckish now, cast a last long look over the barn before heading to the Ace Café for a late lunch. Ten minutes away it was, even on this cold dull Sunday, seething. At least fifty bikes outside, some sports, some adventure, some classics, even some pretty little new wave customs, owners milling about outside and inside enjoying the buzz of the Rocker vibe plus delicious food and friendly, efficient service.

As we ride home, replete, through the dank darkening twilight drizzle I wonder if maybe that was why the museum doesn’t get even a small proportion of the Ace’s clientele? Tastes change as customers sample fresher, more reliable fare and these days even nostalgia is not authentic until it’s bang up to date. Still worth the trip back though.

Continuing our Rider’s Rides! Each month we feature a TVAM member and their bike, talk about why they chose that […]

It’s safe to say that Triumph and I have had our differences over the years. My 2013 Street Triple R […]