(Nobody said it would be a holiday!)

by Dani Fiddaman and Steph Jeavons

Two years ago, as Steph was getting close to the end of her journey around the world, she mentioned the idea of a new adventure. “Do you fancy riding to Everest Base Camp?” she said. “I have an idea to lead a group of women and I need my wingman with me”.  Steph and I had met 5 years earlier on a trip across America and had shared a room for nearly 3 weeks. We’ve stayed in touch and been Roomies on several occasions since.  Well, I didn’t need asking twice!! As a girl from Norfolk, mountains have always held a fascination for me, and they don’t come any bigger than this one. Plus, Steph and I had ridden in Nepal together already, when I visited her there whilst on her trip, and had promised that we would go back to Kathmandu together one day to eat momos.

The idea had come to Steph after talking to Alex Pirie (founder of the Nomadic Knights motorcycle tour company). Alex and his wife, Vidhya, had helped Steph with getting her bike into India in 2014 and they hit it off, planning to work together at some point in the future. Alex already ran tours in India and the Himalayas and was planning trips to Base Camp, but never before with an all-female group. It seemed like the logical thing to do, after a beer or two! “Girls on Top” was born and the date was set for September 2019, once Steph was home and the Friendship Highway had reopened after the disastrous earthquakes in 2015.

The plan was to take 24 women, including me and Steph, from Kathmandu into Tibet and up to Everest Base Camp, using Royal Enfield Himalayans (of course!!), all on recognised roads. We knew the altitude would be a challenge, with Base Camp being at 5200m, but we had two weeks and planned to acclimatise by taking our time to get there, riding over mountain passes at 5000m, and by spending several days on the Tibetan plains above 4000m before descending to Lhasa for a rest day ahead of our night at Base Camp. We were also to be prescribed altitude sickness pills, which make your fingers tingle and give you weird dreams! We’d have a doctor with us, as well as a support truck with mechanics, bike spares, medical supplies and our luggage; and with Alex in the lead and Andy as a sweeper, both on bikes too, we had everything we needed. The bikes were well equipped with soft panniers and tank bags but we’d only need to carry what we required during the day – water, snacks, spare gloves, extra layers as along with altitude comes a temperature drop. 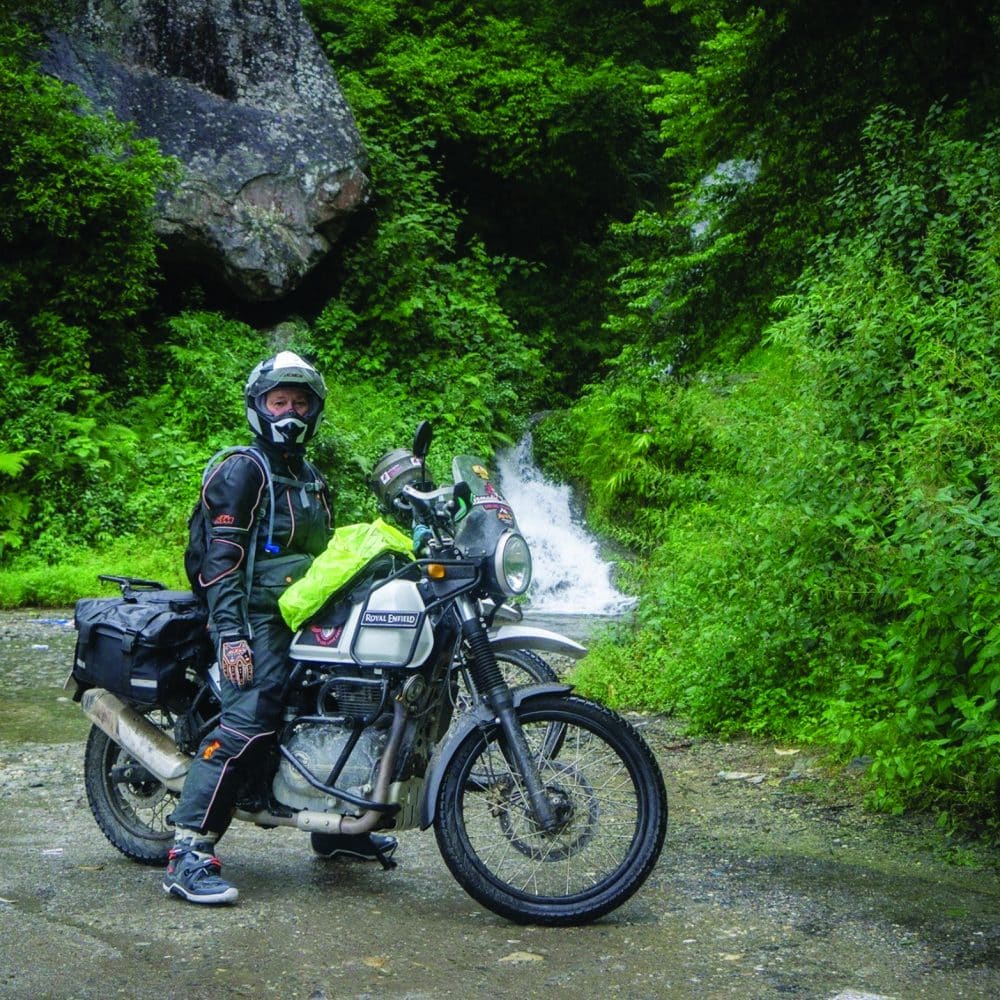 Baptism of Fire (and Water)

Day 1 started with a long wait for our Chinese visas (Tibet being a province of China) and…..rain. Lots of rain!  The monsoon season should have been over but nobody told the rain clouds. Eventually we set off out of Kathmandu, heading for Bidur then Syabrubesi and our hotel for the night, 130km in total. It was soon obvious that the road conditions, some tarmac with patchy sections of gravel and soil, had not been improved by the weather! The soil had turned to mud, there were deep potholes full of water and rivers crossing the road. Up on the pegs, off road style! The Himalayans coped well with the conditions, bouncing along in the potholes, ploughing through the mud like little tractors. The low seat height however meant a lack of ground clearance, which would occasionally get us stuck in a rut, rear tyre spinning on a rock thrown in by a truck driver for traction. But they just kept going, even after being dropped under water!

I was enjoying myself, but other girls less so. It was certainly in at the deep end on our first day and by dark we had only done half of the 130km. Two girls had ridden their bikes over the edge of the road in the bad conditions, thankfully stopping in the green vegetation a little way down rather than plunging all the way to the bottom of the valley. With the help of the locals and the support truck, we got them back on the road.  We regrouped in Bidur, found a hotel that could take 30 people at short notice, had some dinner and took stock. We knew the next bit would be tougher as the road we wanted was closed by a landslide and we had to take the fabled “bottom” road. We slept on it, but in the morning, several girls were suffering after their falls on the previous day and others were exhausted after struggling with the challenging roads. It was with heavy hearts that 10 decided that they wouldn’t continue. Their dreams of Base Camp ended in Bidur.

The remaining 14 set out to do battle with the 60kms of rutted, axle-deep muddy road, and with the trucks and buses who were also forced to use this route. It was incredibly tough. It took us 10 hours and we dropped the bikes many times, but got through it together with gritted, and gritty, teeth. Karen dropped her bike in a river, the waterfall crashing down on her like some kind of waterboarding torture but at least we cooled down whilst helping each other across. In those conditions, lifetime friendships were forged! Once again, we finished in the dark, having been forced to walk around trucks stuck in the mud, blocking even bikes getting through, and then hitched a lift in a local 4WD pick-up truck for the last few kms. Alex hired a JCB and driver to clear the route and our support team worked all night to ferry the bikes down while we slept. 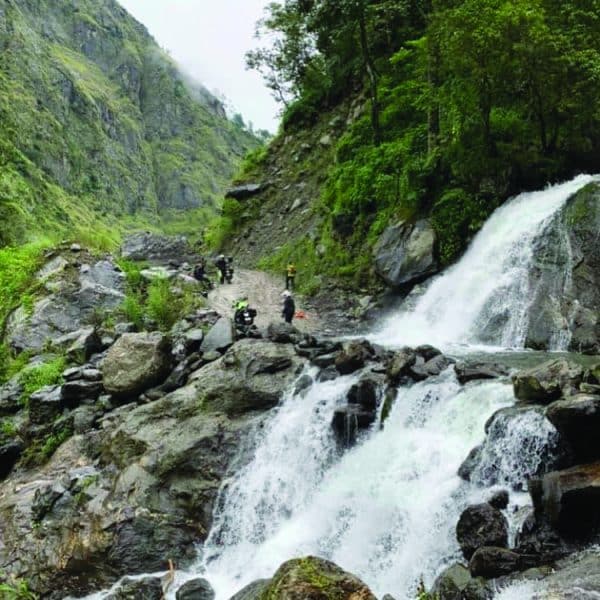 Tibet! Never have I been so relieved to see tarmac. After a short ride we waited 5 hours at the border, while our Tibetan agents needed all of their negotiating skills (and no doubt a few bribes!) to get us through, as our visa details had changed with fewer people and bikes. Finally, we were allowed to cross into China/Tibet. Immediately the road conditions improved, along with the weather, and we happily rode the high passes, twisty hairpins and high Tibetan plains at 4500m with their almost lunar landscape. There were still plenty of challenges: trucks and buses to overtake; yaks and goats to avoid; cars braking suddenly for the speed cameras; and the cold, dry altitude making both us and the bikes a bit wheezy. The 410cc Himalayans were happy pottering at 80-100kph, but would need a quick downchange for any serious overtakes. They were never going to be nimble but they are very stable and handling was secure in the bends.

A night in Xigaze city came and went, along with another of our team, unfortunately injured hitting one of the many small tractors that run alongside the road or, in this case, cut across it in the dusk and dust, with no lights. The remaining 13 made it to Lhasa the next day and finally a rest day at a lower altitude. This provided a chance to do some sightseeing in the beautiful temples, squares and Potala Palace gardens and to do some laundry (we were pretty smelly after the muddy battles in the humid 28C of Nepal). After Lhasa we rode back up to above 4000m to New Tingri, wrapped up well with thermal base layers and winter gloves. Tomorrow we would set out for Base Camp, only 70km away, with the promise of hairpins and a first sighting of Qomolangma, the Tibetan name for Everest. 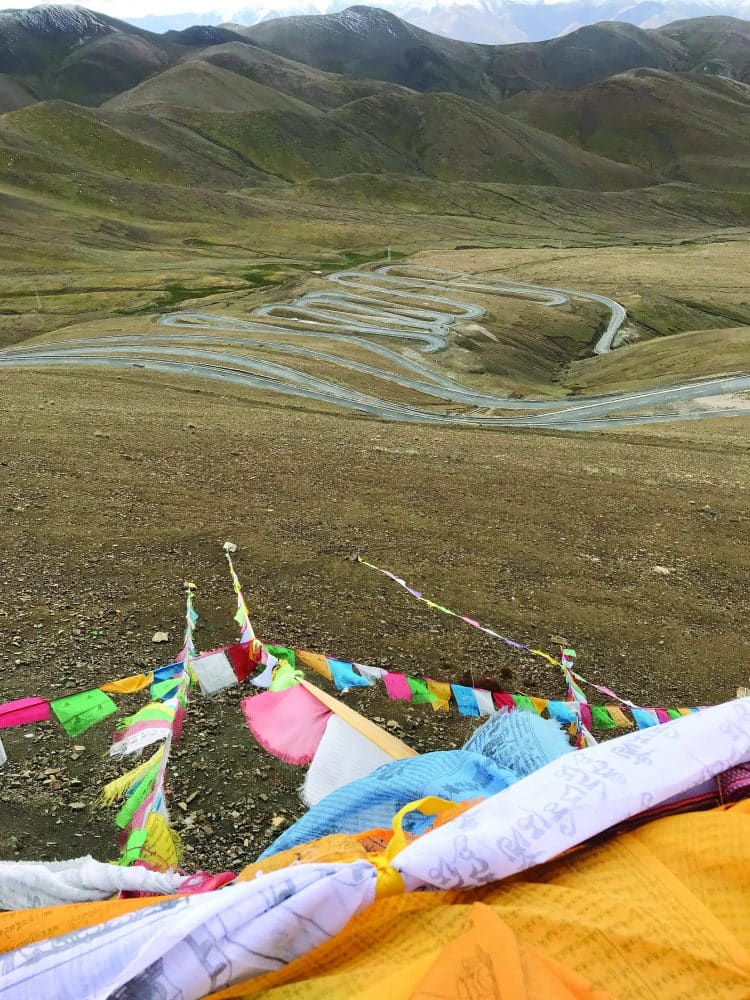 So named by a predictive text error by my other half, but seeming quite appropriate! Woohoo, we made it!! The first ever all-women team to ride to Base Camp. Actually, it was the easiest day’s riding of the trip – beautiful, twisty roads, little traffic and simple navigation. Then for the final few kms we were chauffeured in an electric bus – along with a few other tourists – as the Chinese are trying to protect the national park around the big mountain. The rooms at the Rongbuk monastery are basic, with no showers and “hole above a pit” toilets, but the beds have electric blankets and the restaurant serves delicious food and pints of milky coffee. Perfect. We went to bed happy, but anxious that we hadn’t seen Everest yet, there was still too much cloud. Were we to be disappointed?

Thankfully overnight the sky cleared and I woke while it was still dark and walked up the road, the sky overhead full of amazing stars, to wait for the sunrise. A few girls had experienced pounding headaches and sickness overnight from the altitude and I’d been having nosebleeds, but the view that we finally got was worth all the blood, sweat and tears! 15 minutes later, Qomolangma decided that we’d been blessed enough and pulled the veil back over herself. She was gone and, after breakfast, so were the Girls On Top, heading back down to our bikes and onward to Xigaze again. 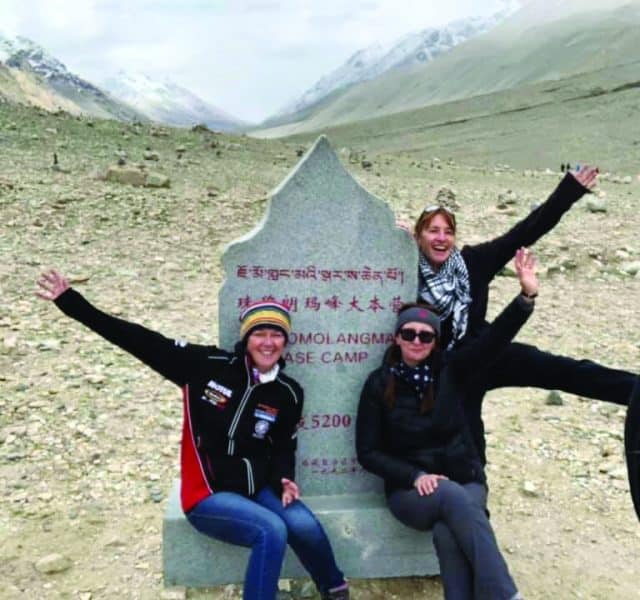 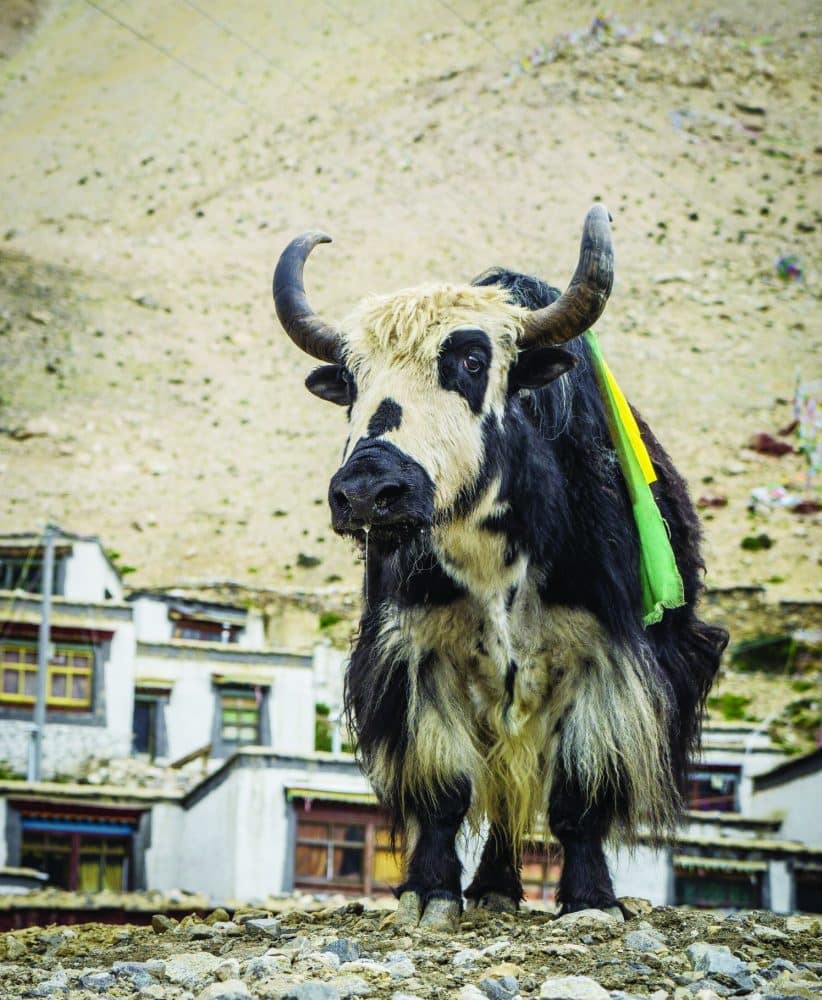 Our last day riding back to Kathmandu was “only” 180km, but we already knew how challenging the roads could be in Nepal. The weather forecast was for more rain and we had the border crossing to get through too.  In our favour were the 2.5 hours we would get back in time differences and that the landslide had been cleared, enabling us to avoid the “bottom” road that had been such a mudfest. Most of the group had flights home booked for the following day so there was no option but to keep going until we got “home”. We’d also heard about another road from Bidur to Kathmandu, rumoured to be 100% tarmac! Of course, it wasn’t – that would have been too easy! – but it was slightly better condition than our outward route and allowed faster progress…… until we hit the mother of all traffic jams, with about 10km to go, just as it got dark. Truck after large, noisy, smelly truck, buses and cars all stuck in both directions, local bikes weaving through them and the road full of potholes and puddles. We squeezed through, split into small groups of 3 or 4 bikes, trying to look out for each other. Chantil dropped her bike, disappearing between the trucks, but was up on her feet, picking her bike up single-handedly, powered by adrenalin!

We regrouped outside Kathmandu, the whole team back together, to tackle the Death Race 2000 that is the ring road. Dark, chokingly dusty, some vehicles with full main beam, some with no lights at all, people crossing in between the traffic, dogs and cows in the road….. you have to be prepared for it all!  Observation, observation, observation doesn’t come into it – you need your sixth sense working overtime!

The euphoria of making it back to the hotel together, all safe, as one closely knit team, was incredible. We were tired, we were smelly, we had no clean clothes (the support truck was stuck in the traffic, finally arriving at 5am with our luggage) but we had done it! 17 hours after we started, and 180kms of the toughest roads I’ve ever done. Much gin was drunk.

Massive thanks to Steph, Alex, Vidhya, Samdup and Tsela from Explore Tibet and all of the Nomadic Knights team for making it possible. To all of the Girls on Top who dared to sign up for the adventure and to the mighty Enfield Himalayan. Nobody could have predicted that I’d learn to love a bike with 24hp! 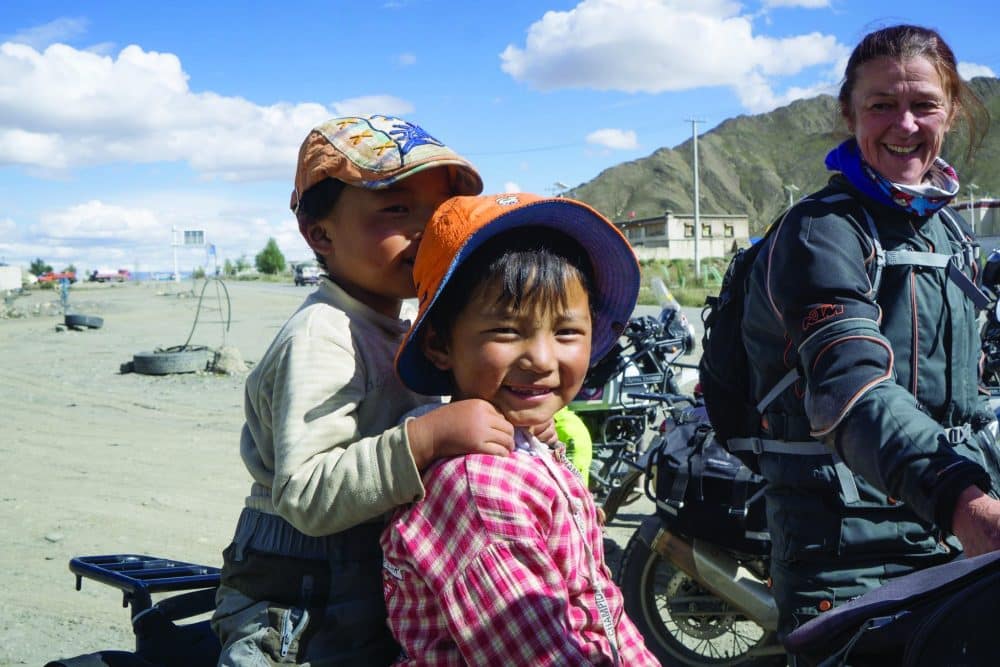 Huge thanks to Dani and Steph for the article and pictures from their amazing trip.

Introducing a new feature here in Slipstream: Rider’s Rides! Each month we’re going to feature a TVAM member and their […]

Breakdown Insurance – Are You Covered?

Many of us have breakdown cover to deal with those situations when things don’t go quite as planned. Most of […]