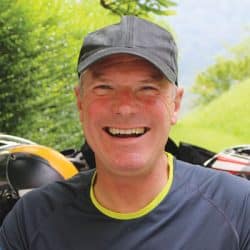 How subtle the change in weather is. Through balmy June, July and August we get used to tee-shirts, summer gloves and, if you’re lucky enough, even airflow jackets. Then one day it’s a bit cooler and the long-sleeved shirt goes on, then it’s raining so the waterproof gloves come out and the airflow gets left behind.
Suddenly it’s a colder, misty ride to St Crispin’s and you realise the summer textiles will not be coming out again until next year.

Where did the summer go?

Great rides with great mates. Maybe nights away watching the sun go down with a beer or glass of wine with the buzz of the bike still in your ears as you share that ‘great’ overtake story. Laughter with mates over dinner, maybe in a warm market square in some foreign town. Sharing pics and banter on Facebook with those who aren’t there (to make them jealous? – surely not). The LLR, ABC or Track Skills day where you discovered things about your bike and yourself that you just didn’t think were possible! A Yorkshire foray…

And then came 7Ws and Castle Combe……and so it goes on through the Autumn and Winter. TVAM is an all-year round club. Our Autumn seminars are coming up, firstly with Steve Parrish in early November, Austin Vince in late November, the AGM and MotoJumble in January, and so much more.

What, lay-up your bike for Winter? That‘ll be for those fair-weather riders, we’re Advanced Riders and we do it safely, systematically and smoothly – All Year Round. Only with more clothes on.

However, we shouldn’t move on without a big ‘Thank You’ to everyone who contributes to TVAM in offering their time and effort to bring all the things we’ve enjoyed this summer to fruition. The teams that run Look, Lean and Roll; Advanced Braking; Meet and Greet; Motorcycle Maintenance; the Observers and Observer Training Team and all the local Team Leaders who give of their time to keep things moving forward. And of course the Slow Riding competition, Rutland Rally, Team Challenge, 7W’s, Track Skills Days, and the numerous tours abroad.

There’s so much done by so many in such a short time.

Finally, I’d like to welcome both Sarah Chandler and Chris Brownlee who have been co-opted onto the Committee. Sarah as Green Team Leader is keeping us engaged with all the developments taking place in the team, including the new Ride On programme. Chris as Training Team Leader is, by default, Deputy Chief Observer so it’s important he’s involved with all the plans we’re laying for the future.
So have you bought your ticket for the Steve Parrish evening yet?