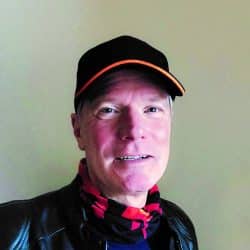 What does the ‘New Normal’ look like as lockdown restrictions are relaxed? Well, as a biker you’d think our PPE means we’re already pretty well protected. What virus can fly at 70mph to catch you then penetrate a full face helmet with visor, gloves and leathers? However, I guess it’s the same old story, it’s the stopping which can hurt.

The new rules mean we can now have lots of social runs with up to six riders present – that’s people not bikes, so a bike with a pillion counts as two. Of course if two households get together there could be more on a run but I don’t know of many households with three bikers in them – mind you their garage would be interesting….

So we can do Observed Rides, with a Trainee Observer involved too, as that only makes three. Cafe’s now being open means we can start to frequent the stopping places we all know and love, which is when the ‘new normal’ catches up with us. Social distancing still applies. 1m Plus really means 2m if possible, so maybe stay outside to drink the coffee and anyway as an Associate you don’t want your debrief in front of an audience listening-in as the music has now been turned down low.

When at the petrol station keep your gloves on when using the pumps. If you haven’t tried the payment Apps that Shell, BP, and others have launched, now might be a good time to try them. It means you don’t have to go in to pay, wait in a queue behind someone who has also done their weekly shop, be tempted by chocolate bars, to then shout loudly at the grumpy man behind the plastic screen who’s operating the till whilst you still have your earplugs in and helmet on. You can just ride off knowing the payment has been authorised by those little men in the Cloud.

As we can’t, as yet, hold a St Crispin’s with 200+ bikers present, or run any of our courses it means most of the social activities of the Club are being organised by local teams. This is a real opportunity for you to get involved with your local team if you haven’t already. Apply to join any of the local team’s groups.io areas to find out what’s being organised.

With social runs being much smaller it might be more the size of group you’re happier riding with. Most of the social runs are using the Buddy System to keep the run together so the complexity of the Marker System isn’t there if you were at all concerned about being ‘dropped’ as a marker and sending everyone the wrong way – much to the annoyance of the Back Marker. There are many anecdotes of runs being ‘fragmented’ (substitute a stronger word of your choice) by a well-meaning marker. All that disappears with the Buddy System, though I guess someone will still get it wrong by forgetting to wait until the next rider is in view at some junction….

Hotels are starting to open and even the possibility of going onto the continent, which means that bike tours with a couple of mates might be on after all. Fire up the Sat Nav…..

Observers will know that for Father’s Day this year we ran a special offer of a Free Observed Ride with TVAM for anyone who applied. With St Crispin’s not being held for several months we were keen to raise the Club’s profile and possibly recruit some new members along the way. The offer was pushed out on social media and we had 13 riders apply. The nominated Observers are in the process of arranging the rides and so far around half are joining up. Added to the steady flow of people who are joining via the website, we’ve gained over 20 new members in June, with a week still to go.

So there’s lots going on in the Club even if you may have to look a bit deeper at the moment to find it. But most importantly, stay safe and I hope to see you all soon.