A few years ago I found myself commuting about

an hour each way through the winter and, as the weather got colder, I started to think about electric-heated jackets.  Something all heated jackets seem to have in common is that they’re quite expensive, and I’m a skinflint.  A bit of internet searching found a few people who’d made their own (one of the better write-ups being by a chap called Ken Hastie whose website seems to be no more) and so a project was born.

First a bit of theory

A roll of 30 AWG wire from RS came to £17 delivered.  This is supposed to be between 0.3 and 0.4 ohms per metre. I could have bought cheaper wire but I used the Teflon-coated stuff which is good to 200 degrees C and should be a lot tougher than a normal plastic-coated wire.  I cut a 12m length, measured the resistance with a multimeter, then worked out that 10.5 metres should give me about the right resistance.

A lot of the people I’d found online had built the element into their jacket liner but, not wanting to risk damaging my liner (and not knowing the melting point of Gore-Tex),  I found a cheap sleeveless fleece in M&S for £15. I laid out the wire using tape to hold it in position to start with then, when I’d worked out where it all needed to go, I marked it up with a felt tip and spent a couple of evenings practising my needlework.  I went for a similar layout to Hastie, a vertical pattern spaced about 2” apart with an extra horizontal loop at the base to allow me to line it all up correctly at the end.

The wires end in the right hand pocket, where they’re soldered to a thicker cable which pokes through the fabric, I’ve then used a standard DC power connector to join it to a longer cable with a DIN plug on the other end to plug into the bike. The idea being, if I forget to unplug it the inline connector should come apart without damaging anything, plus when I get off the bike and wander off I don’t have several feet of cable trailing on the ground.  I wanted to use a 5mm connector like the ones used by most laptops but couldn’t find an inline socket so settled for a standard 2.5mm.  In hindsight I should have gone for something like an SAE connector as I’m on the upper limit of the capacity of the 2.5mm one.

Once finished I measured the resistance of the whole thing as 3.7 Ohms, which works out at about 57 Watts, and 3.9A. Increased resistance with temperature means at 40 degrees this drops to about 52W, although I’ve never measured the temperature. I fitted a DIN socket inside the left faring of my bike, with an on/off switch on the dash.  My auxiliary electrics are all on a switched line with a 15A fuse, but I’ve also put a 7.5A fuse on the line to the left-hand socket. 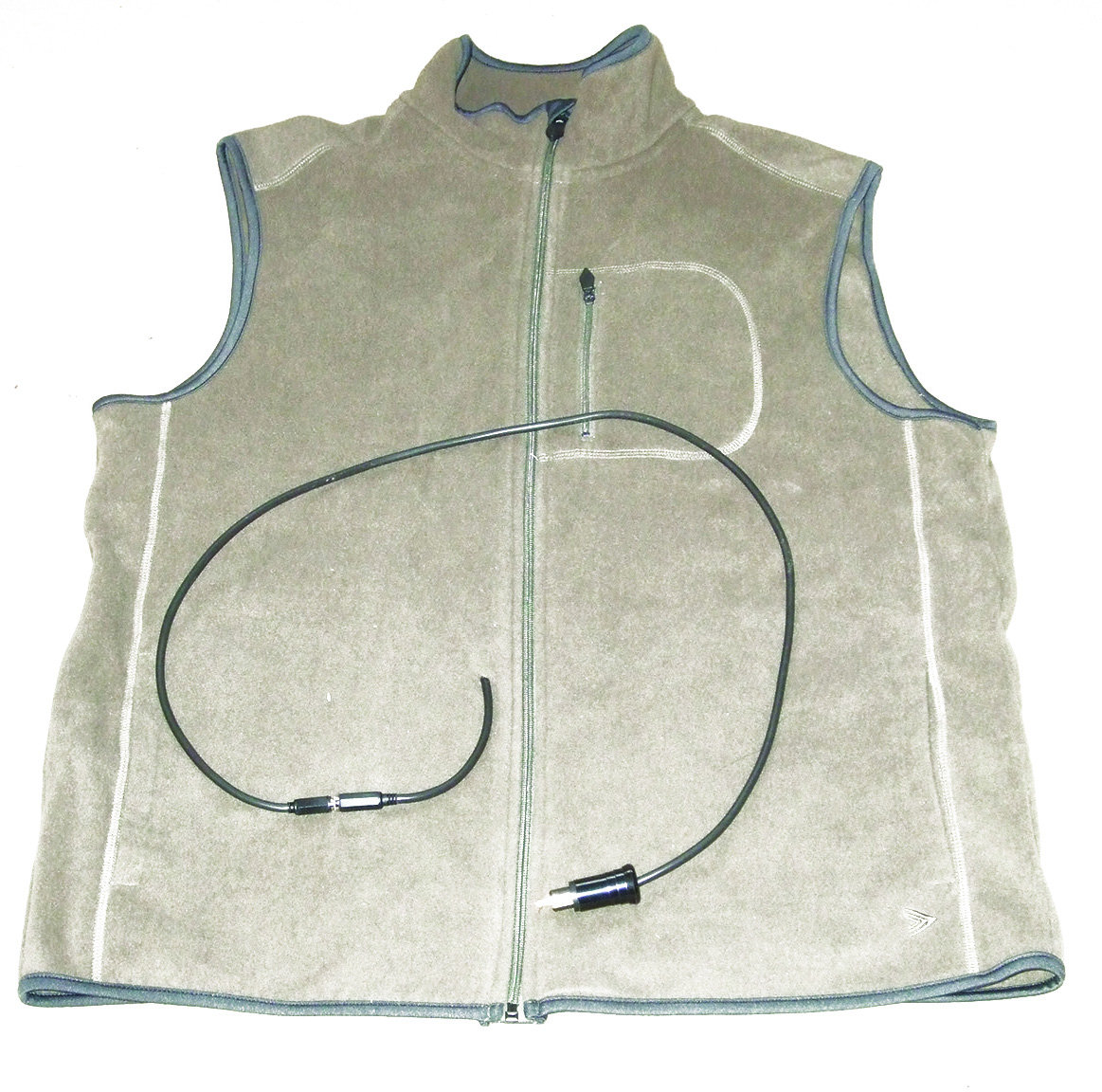 My first test ride was at 9 degrees and I had to turn it off at town speeds as I was getting too hot.  At higher speeds it was like leaning on a radiator.  I decided to add the extra 1.5m of wire I’d cut from my initial resistance test back in, which dropped it to a much more useable 50W.  Having never tried a heated jacket before I don’t know why I didn’t do this years ago, the difference is fantastic.  Keeping my core temperature up keeps my hands and feet warmer and makes winter riding a much more pleasurable experience.  It did a magnificent job of keeping me warm all winter, including the morning I found a car on its roof having slid off the road on sheet ice.

I still think it’s a little warmer than it needs to be though, so I still often turn it off at lower speeds.  I did a write-up on it on the TDM owners forum and someone pointed out that you can buy 10A DC motor controllers on e-bay for under a fiver.  These are pulse width modulators that give you a lower power by rapidly switching the voltage on and off.  The pulse duration, and therefore jacket temperature, is controlled by a rotary dial that could easily be fitted on the dash.

However I finished that job and spent the next winter commuting 9 miles instead, so the jacket now only sees occasional use and I’ve not got as far as fitting the PWM.  The jacket’s still going strong though and as it’s currently 4 degrees and sunny I think I might be about to get an outing this morning. 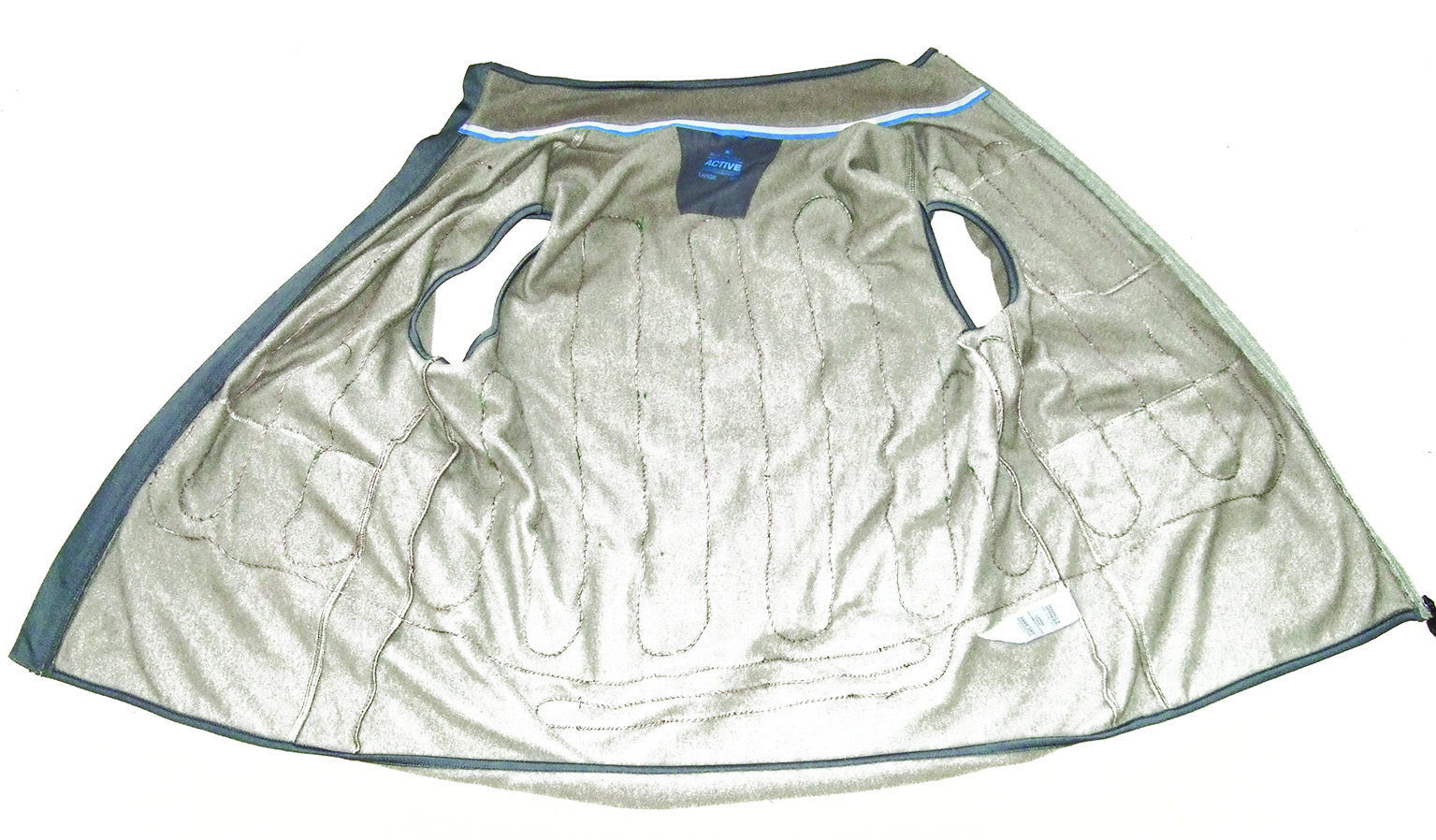 Total cost was about £35 plus a couple of evenings of my time, but I only used half the wire so it’s only really cost me £27 with enough wire left to make a jacket for the wife if she ever starts winter commuting on her bike.

Speaking to fellow bikers, mine is not an unusual tale, but I hope it will bear telling all the same. […]

Another year, another Motorcycle Live – the final of the big three European winter bike shows, and the one most […]

I suspect the answer to that question is different for every new associate that signs up. Some need the qualification […]