Having spent a lazy summer swanning around the Cotswolds, John Stevenson was getting bored. Patrick White, who was recovering from a serious illness, was also bored, having not been on a bike for nine months. Both wanting to extend their biking horizons, we braved an adventure north – all the way to Birmingham. The destination was that bikers adventure park, The NEC Bike Show.

Without the use of maps, compass or satnav, we explored the show, narrowly avoiding bankruptcy at the likes of BMW, Norton, Ducati, Brough etc., until we found an oasis of calm and a very friendly welcome at the Indian Rides stand.

Narendra, the founder, and his wife Gopika asked us if we had ever thought of going to India. John replied “Yes, it is somewhere I have always wanted to go,” whilst Patrick, looking horrified, said “You’ve got to be joking!”

Fast forward to early February 2019. Patrick, having been encouraged, maybe bullied, by John agreed that – although it was pure madness – they should just do it. By the end of February having, in true Indian style, negotiated a good deal for the tour, flights were booked with British Airways and deposits paid. At this point it seemed like a good time to do some extensive research into what we were actually letting ourselves in for.

The Tour was to last 15 days, but as we considered ourselves to be “gentlemen of leisure”, we added a day on the front and several days on the back. When planning and booking we worked out a strict budget, but over the following months that gradually fell by the wayside. The months from the end of February to the departure were filled with obtaining visas; having lots of jabs; getting International driving licences; a long search for a map of Rajasthan; endless shopping trips and searches on eBay for suitable biking gear; enough first aid kit to equip a  small ambulance plus large quantities of Deet for the expected mosquitoes.

Then one day we found ourselves at Heathrow Terminal 5. Having checked in the luggage, we settled down at Costa in the departure lounge and said “Well there’s no turning back now!” The big positive was that we knew that we were going to have excellent biking weather.

10 hours after buying some ‘Scottish medicinal mouth wash’ in the Duty Free at Terminal 5, we looked out of the aircraft window to see New Delhi rushing up towards us out of the smog. A car from our hotel collected us from the airport and gave us our first taste of Indian driving and traffic. India, having been part of the British Empire, had all the familiar infrastructure: driving on the left, pavements, roundabouts, pedestrian crossings, traffic lights, English road signs, only you just ignore all that. The police just stand and watch the ensuing chaos.

After checking into our hotel we went for a climatisation walk – a circular tour of the area around the railway station. We were in awe of the volume and variety of traffic, which included cars, lorries, bicycles, scooters, motorbikes, ox carts, Tuk Tuks, cycle rickshaws, dogs, cattle, goats, pedestrians and handcarts. It all appeared totally chaotic. The deafening cacophony of horns and engines which continued 24/7 almost made you forget that the air was over 40°C and heavy with pollution.

Contrary to all the scaremongering, the smell was no worse than most other cities. To get a real flavour of Delhi we took a ride in a Tuk Tuk across New Dehli centre at rush hour – until you have experienced that you don’t know you are alive. We also rode the Metro, which was so modern, efficient and clean we thought we had been transported to another planet.

That evening we enjoyed our first ‘real’ Indian curry followed by a good night’s sleep. The next morning we were collected from our hotel by Indian Rides and whisked some 4 hours away in a mini bus to Mandawa and our hotel, The Mandawa Haveli. It was essentially a town centre manor house of historical and architectural interest, and we felt that we were now experiencing true India. Parked in the front courtyard were our trusty steeds for the next 15 days; 14 new Royal Enfield 500cc Bullets in British Racing Green. Wow, let the fun begin!

That evening over dinner and a few bottles of Kingfisher, we got to know the rest of the tour group which consisted of us, 4 other Brits (3 of whom were IAM members), 1 Dutchman, plus 3 French couples and of course Narendra, our tour leader. As well as this there was the support crew of 2 with their minibus for our luggage and a variety of Royal Enfield spare parts. These two guys we renamed Hudson and Jeeves as we could never remember their proper names and when we did remember we couldn’t pronounce them.

Now the serious riding began but first a safety briefing and bike check: Check 1 engine starts; Check 2 horn works; Check 3 – just ride! The first day of riding covered many aspects including ignoring everything we learnt back home, riding on road surfaces that were so bad that it proved England does not have any pot holes, just minor surface imperfections. We rode through rivers, deep gravel, sand and unmade roads, all while negotiating regular Indian traffic – which appeared to be complete chaos – plus avoiding cows, camels, pigs, dogs, oxen, monkeys, and of course, pedestrians, Tuk Tuks, rickshaws and thousands of scooters. In spite of all this, it was some of the best fun we have ever experienced on bikes and did wonders for our observation and filtering skills. 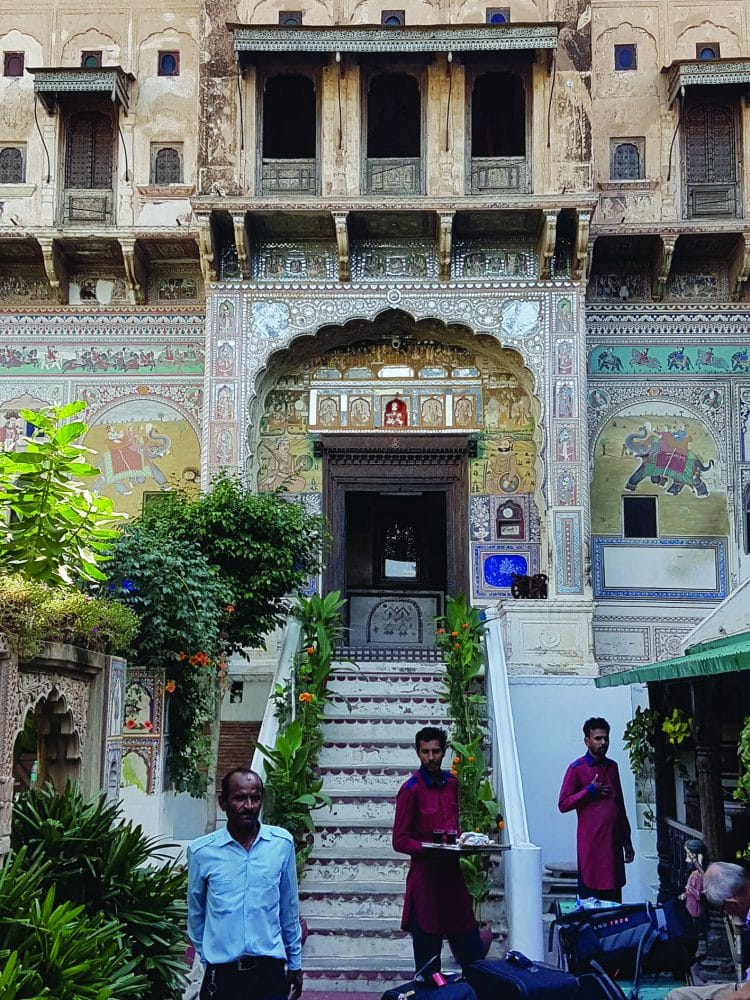 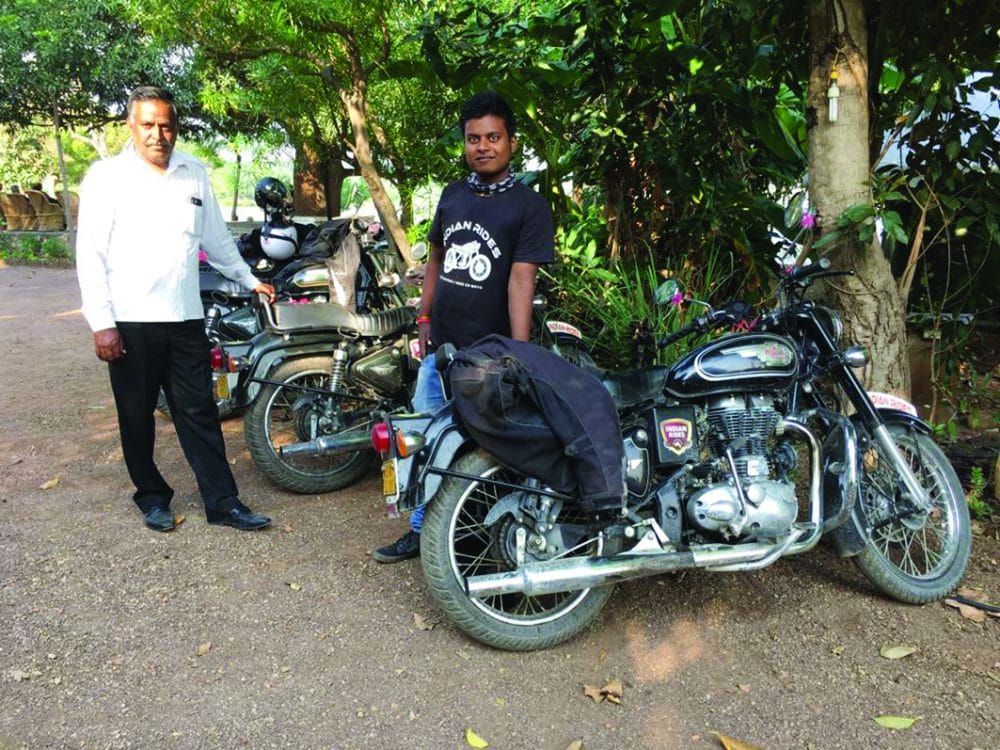 The following day we left Mandawa and headed for Bikaner, covering another good mix of road types and avoiding herds of camels. We were now really loving the Bullets, the big 500cc single, thumping away, exhaust burbling, plus the popping and banging on the overrun. We stopped off for a tour of the Fort of Junagarh then on to Bikaner, where we stayed in an ancient palace which now served as a 5 star hotel.

After a good breakfast of traditional Indian or European fare, we were back on our Bullets heading for the golden city of Jaisalmer, on the edge of the Thar desert. Dinner in the open roof-top restaurant watching the sun set on Jaisalmer Fort was spectacular. The fort looks like a giant sand castle rising from the sandy plains.

The next day started with a tour of the fort and the town, then more riding but this time out into the Thar Desert. After an hour or so our hotel for the night appeared as if like a mirage. It was a tented complex surrounded by huge sand dunes. Our next test was to access the site up a rather large and steep sand dune. Narendra filled us with confidence while we all waited at the bottom and watched him ride straight up as though it was a tarmac road. We then attempted to emulate him one by one, resulting in no one getting much further than halfway without the assistance of several locals pushing. Having proved we cannot ride bikes on sand dunes and any prospect of competing in the Dakar Rally completely dashed, we all transferred to camels.

That night we were entertained by local gipsy dancers and musicians, and slept under the stars only to discover, the following morning, that we were just as bad at riding back down the dunes.

We negotiated many roads that were covered in sand, some several centimetres deep, but the Bullets never let us down and we couldn’t believe how versatile our bikes were, coping with everything thrown at them and proving you don’t have to spend any more than about £4,000 to have a brand new bike that is great fun and full of character.

Later that day, arriving at our destination, Pokaran, we found our hotel to be a converted fort, complete with battlements and a large outdoor swimming pool. Could this get any better? 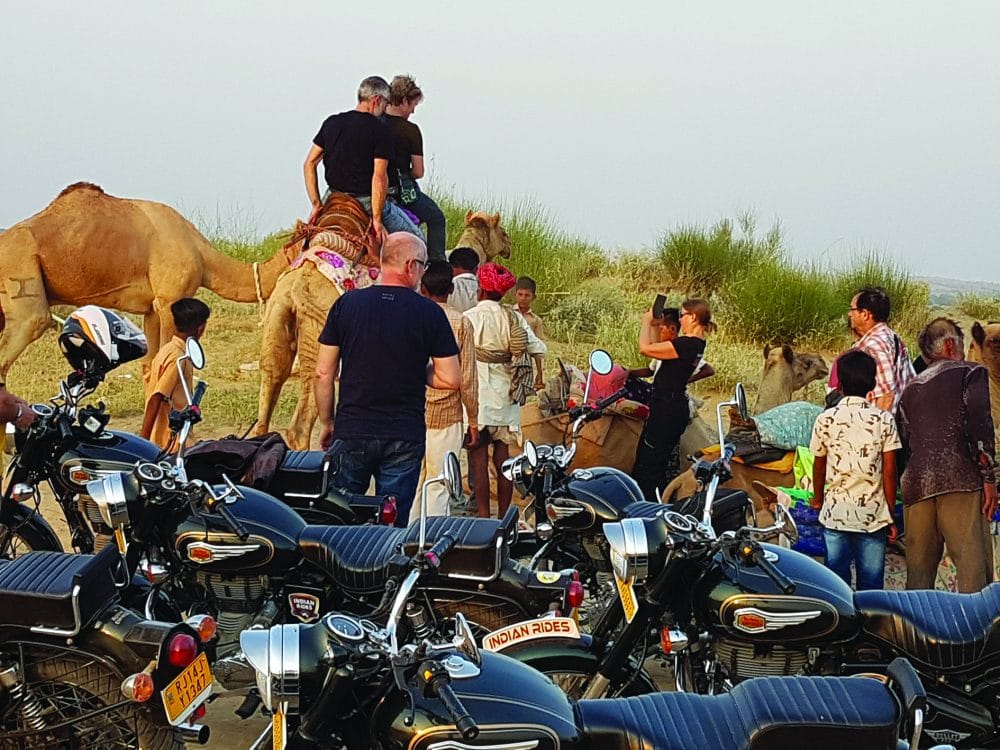 From Bullets to camels.

Another year, another Motorcycle Live – the final of the big three European winter bike shows, and the one most […]

I started riding powered bikes on my 16th birthday – well, mopeds as that’s all we were allowed back in […]

It’s been a little while since I test-rode any new motorcycles as part of my search for a comfortable, relaxing, […]