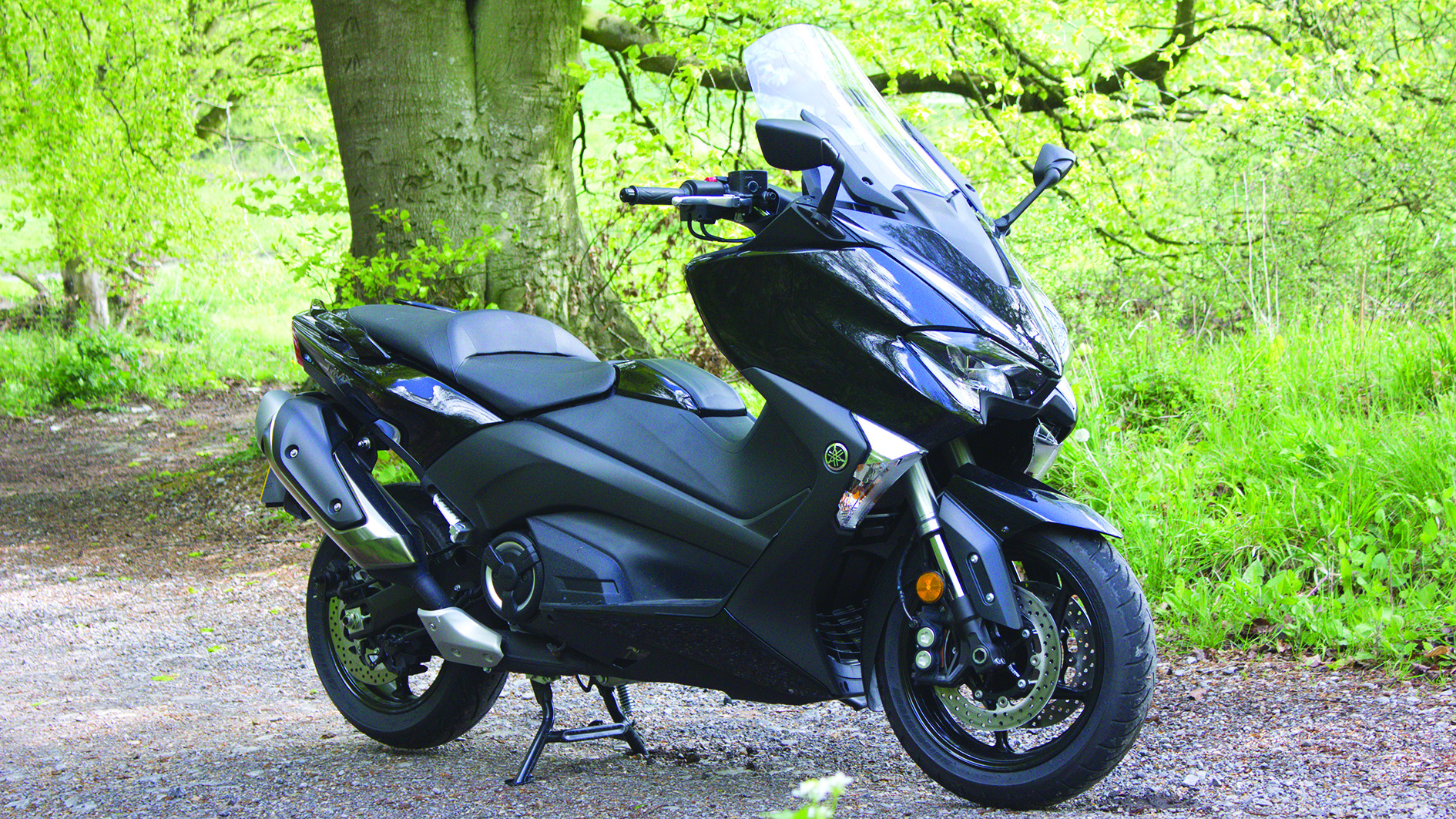 It’s been a little while since I test-rode any new motorcycles as part of my search for a comfortable, relaxing, low-speed, two-up touring bike. I wanted something with a feet-forward riding position, that could carry two in relative comfort while being sufficiently engaging that I wouldn’t mind the slower, more relaxed sort of riding that typifies my family tours. Frustratingly, it seems that motorcycle design has become extremely polarised, with manufacturers pushing their designs into increasingly narrow genres, and finding the right mix of price and features was proving increasingly difficult.

I started by giving scooters a go in the shape of Honda’s new Forza 300. Perfect on paper, the reality was a disappointment, largely due to the forgettable riding experience and unpleasant buffeting at speed. The next obvious contender for riders seeking a feet-in-the-wind stance were cruisers, exemplified in my case by the Harley-Davidson Sport-Glide. There was an awful lot to like – an engaging engine, comfortable ride, and lockable hard luggage, but a starting price of £15,000 proved too bitter a pill for me to swallow.

Other, cheaper cruisers are available, but pillion accommodations on smaller and cheaper models are clearly an afterthought. The attitude of both Harley-Davidson and Indian is that riders intending to bring company along on their adventures should be looking to their respective full-price, full-dress tourer ranges. Triumph is no better; I had high hopes for their new Speedmaster, but the brick-like pillion perch was vetoed by my partner after just a few moments’ seat time.

Yet even as I was forced to give up on cruisers, scooters kept pulling me back. I’d previously dismissed the larger Suzuki Burgman 650 and Yamaha T-Max thanks to their circa £10,000 price tags, but on paper, they really did tick almost every box. The bigger the scooter, the bigger the under-seat storage, with enough legroom to let you really stretch out. Top speeds north of 100mph as well as features such as cruise control, heated seats, and electrically-adjustable screens mean that these scooters begin to look more like half-price tourers rather than oversized city runabouts. Considered thus, the £10,000 asking price starts to look a lot more reasonable.

So, could a maxi-scooter do everything for me that a £15,000 Harley-Davidson Sport-Glide offered, but for several thousand pounds less? I zeroed in on the Yamaha T-Max first, its reputation as the better-handling of the big scooters giving it a better chance of meeting my exacting requirements. Confirming this proved a real challenge; none of the five Yamaha dealers I contacted kept a demonstrator on their fleet, the last finally suggesting I call the brand’s head office to track one down. 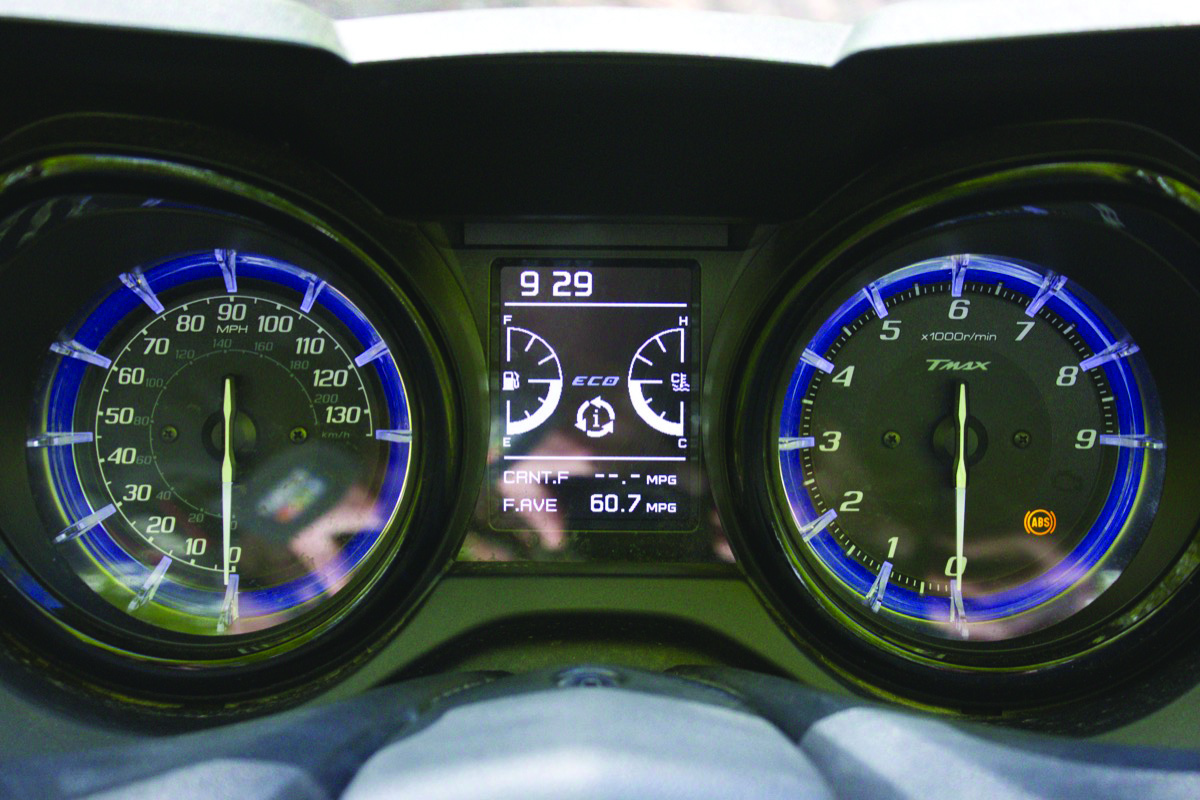 So what does your £10,000 buy you compared to, say, a Honda Forza 300? The extra 251cc of displacement doesn’t tell the whole story – it’s an under-square parallel twin rather than a single-cylinder engine, almost doubling the power output to an A2-compliant 45 horsepower. What you can’t tell without stripping away the bodywork is that, unlike smaller scooters, the T-Max’s engine is bolted to the frame, independently of the wheel and swinging arm. This arrangement matches conventional motorcycles, where the larger engines make the idea of mounting the entire powerplant as unsprung weight unpalatable. 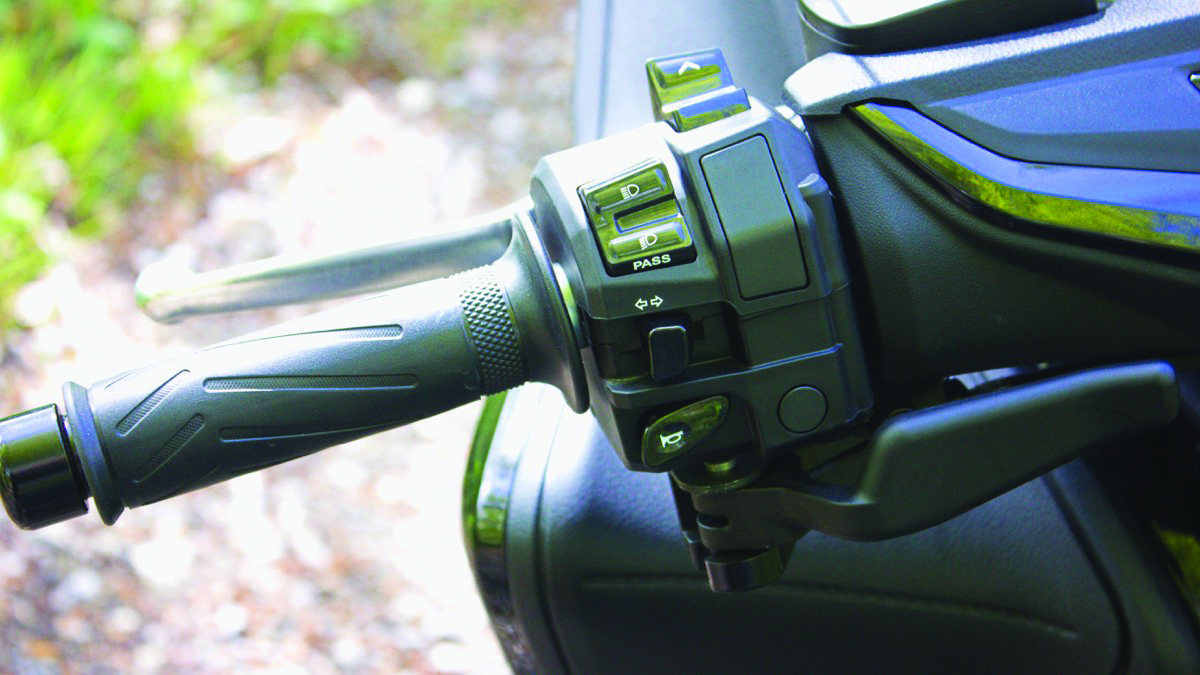 Yamaha has pushed the T-Max’s parallel twin up near the front of the bike and the entire powertrain lies completely flat under the floorboards for a kerb-scrapingly-low centre of gravity. A cruiser-style belt handles final-drive duties, and a stout monoshock is tucked up underneath. Front suspension is by way of a pair of upside-down forks with twin radial 4-piston brake calipers hanging off the bottom. And lest you think that Yamaha needed R1-spec stopping power to handle the excessive mass that maxi-scooters are famous for, the advertised wet weight is a mere 216kg – only 16kg more than the R1.

Weight, incidentally, that Yamaha claim is perfectly balanced fore and aft, in sharp contrast to most notoriously rear-heavy scooters. The result of this is that while the T-Max doesn’t handle quite like a traditional motorcycle, it comes incredibly close. The scooter feels light to turn in, holds a line with poise and doesn’t fight back if you need to push harder in decreasing-radius corners. Lean angle is an impressive 50 degrees, which is just as well given that there’s nothing to grip your knees against, so hanging off isn’t really an option. As such, you can take curves with significant speed and confidence.

Driving out of corners is easy too, because the smooth, torquey engine works with its continuously-variable transmission, rather than seeming to be endlessly straining against it. Certainly, when pulling away from a stop or requesting a sudden burst of extra speed, the engine revs jump quickly and seem to hang in place, disconnected from the bike’s own rate of acceleration. But a couple of seconds later things seem to sync up again, with the engine speeds rising in conjunction with the speedometer, rather than droning listlessly regardless of the situation. 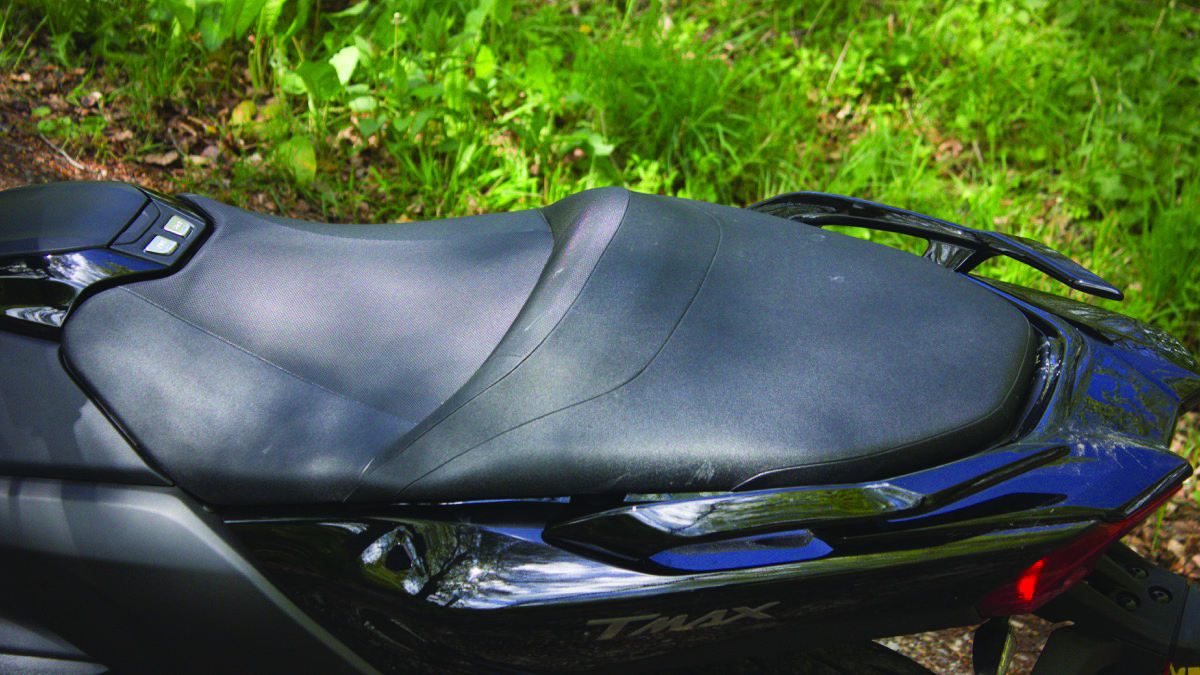 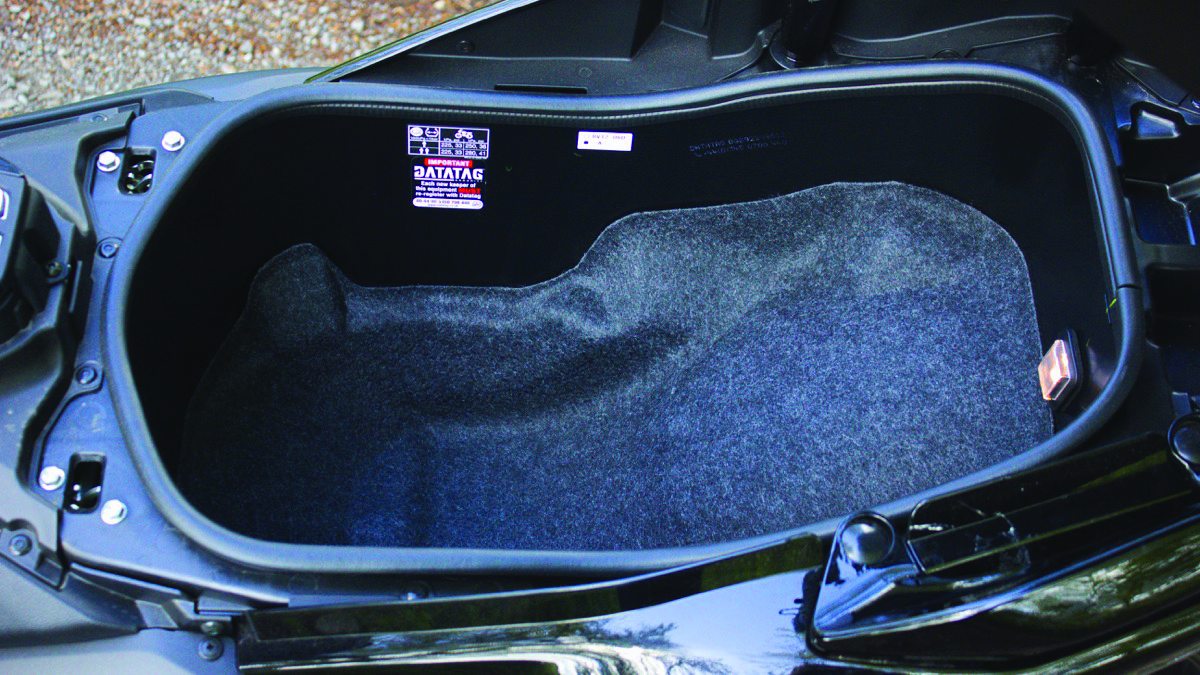 You never quite escape that drone, however. YouTube shows us how these scooters can actually sound fairly entertaining, popping and crackling on overrun as part of an enjoyable sonic accompaniment to more spirited riding – but only if you shell out for an aftermarket exhaust system. Yamaha wants more than £1,000 for the official Akrapovic option, and the T-Max definitely loses points for a stock system that is so quiet and devoid of character as to be quickly (and mercifully) drowned out by wind noise.

Which is a shame, because I’ve been racking my brains since I handed the keys back, trying to think of any other reasons to subtract points from the T-Max’s score. Yamaha’s designers did their best in wrapping an attractive body around a naturally bulbous layout, but I’d appreciate a more interesting selection of colours than varying shades of black and grey. The stock windshield is good, if not great – wind hits me right in the helmet and can cause a bit of noise at higher speeds, but it’s mostly smooth flow – no buffeting.

The £1,500 extra you pay for the DX version of the T-Max gives you a couple of extra buttons that raise the height of that windshield a considerable amount, theoretically solving that problem at a stroke. It also gives you electronic cruise control, heated grips and even a heated rider’s seat. There’s also a clever telematics system that allows you to remotely track your bike in case of theft, and view statistics about where you’ve ridden and how fast you were going – the latter not necessarily a benefit, perhaps. But that’s it – the rest are minor cosmetic differences, and if it weren’t for the blanking plates on the left-hand switchgear you’d never know you’d skimped and ordered the cheaper model.

All flavours get large twin dials for speed and revs, both chosen more to make four-wheeled converts feel comfortable rather than provide any real benefit to the rider. Digital speedos are always easier to read, and on an automatic transmission the tachometer only serves as a distraction from the road ahead. And it really is surprisingly easy to get distracted; I frequently found myself looking around and admiring the scenery, so easy was the T-Max to ride. 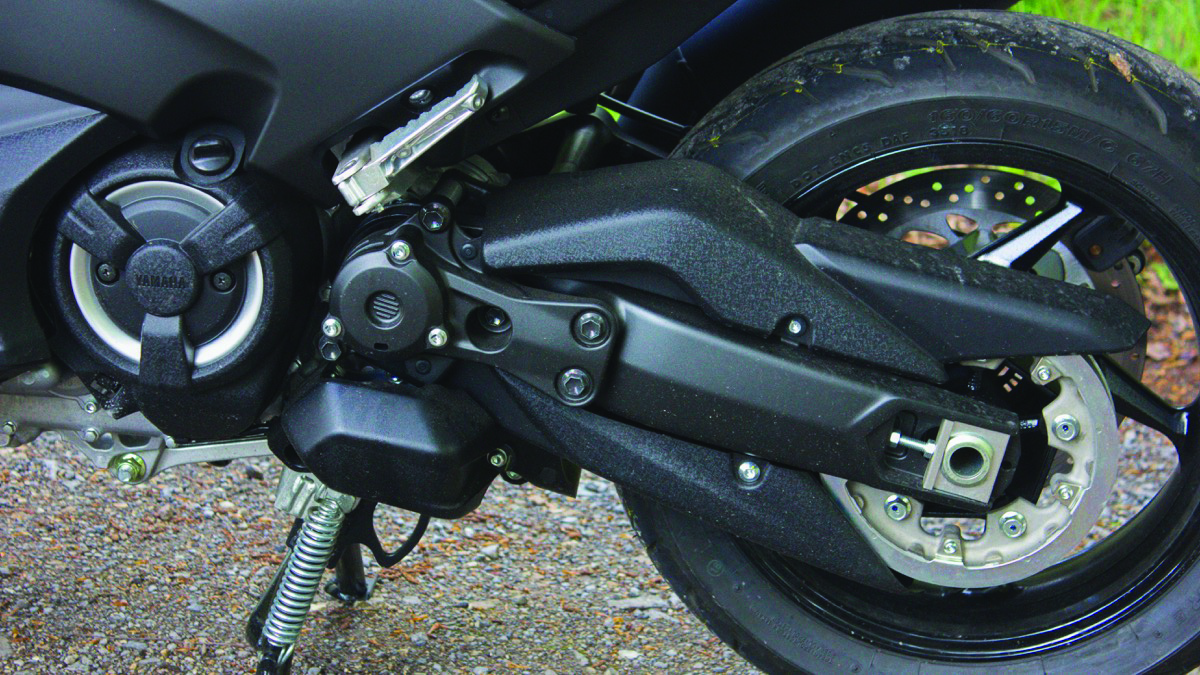 That should have meant that the experience was boring – I wasn’t being called upon to focus every fibre of my being on the task at hand, yet I was somehow enjoying the ride all the same. If anything, I worry that my riding standard might suffer when I’m not trying to hone my skills to a point with each ride, in every corner. And I would definitely need to decrease my speed further still if I’m going to start admiring distant mountains instead of watching for hazards ahead. But isn’t that what I’m looking for here? I really struggled to figure out what my opinion of the T-Max was, something tangible and objective that I could pin down in writing. But the overriding point is simply that I’d really quite like to ride it some more.

It’s not thrilling or raw, and doesn’t offer any kind of visceral riding experience. It’s not spectacularly efficient for its engine size, the Continuously-Variable-Transmission and barn-door windshield conspiring to push fuel economy down to about 60. Yet, like my V-Strom 650 it’s pretty good at everything while adding a wealth of practical functionality. You can rarely exploit the massive horsepower of a modern sports-tourer in the real world, but you can make use of the T-Max’s genuinely comfortable seat for every second of every ride. 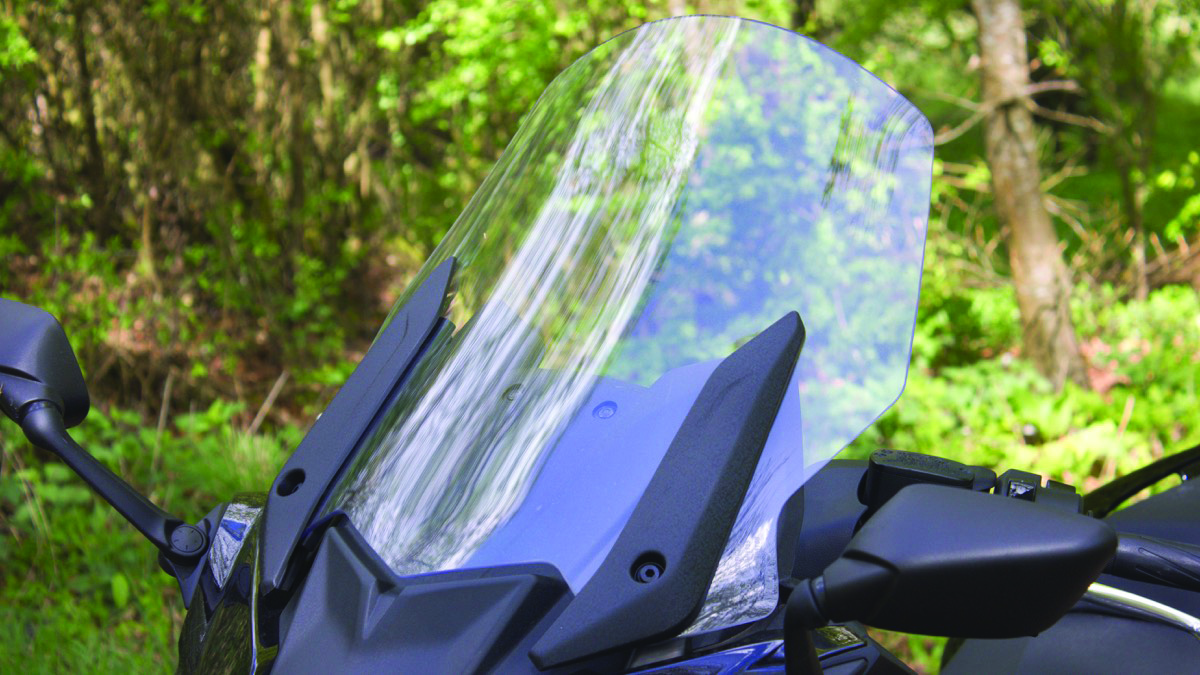 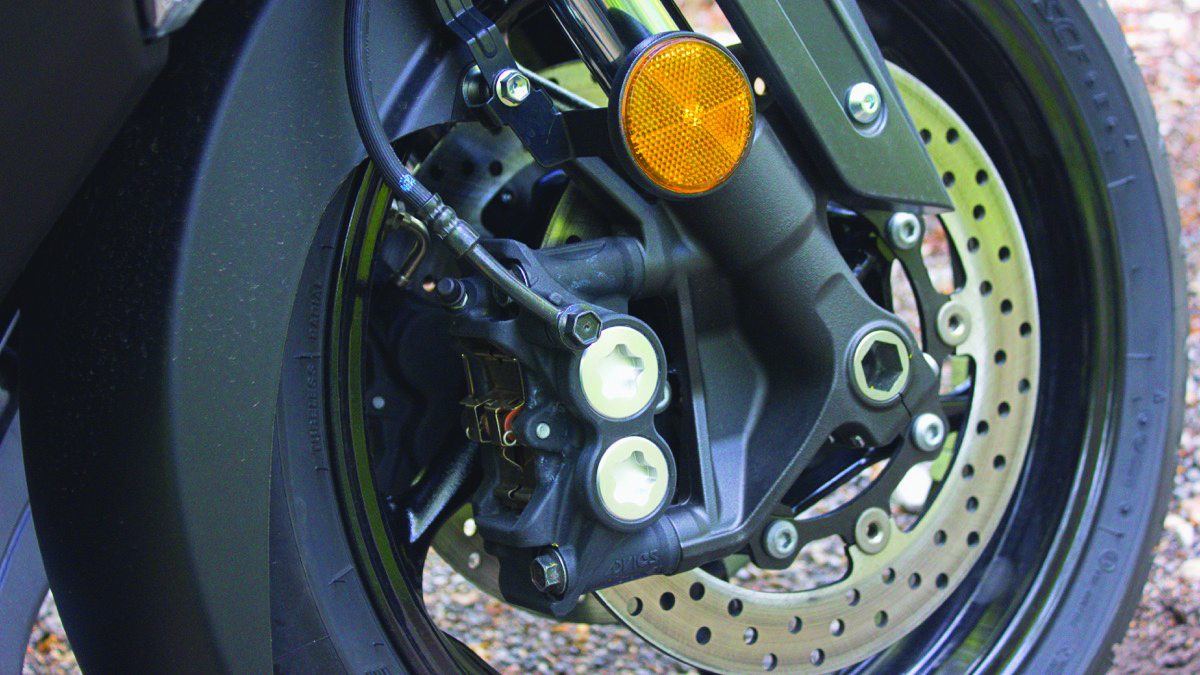 The price of admission will be an issue for some, although a quick scan of the classifieds reveals that there are bargains to be had on nearly-new models. Oil changes are every 6,000 miles, with 12k major services including replacement of the transmission v-belt. Pay a workshop to remove all that plastic and the labour rate can really add up, but my research shows that it’s nothing that a patient home mechanic should be scared of. And being a Yamaha, valve clearance checks aren’t necessary until 24,000 miles, something I feel other manufacturers could learn from.

There’s no oily chain to maintain, thanks to the belt final-drive, headlights are modern LEDs and the massive fairing will keep you warm and dry in conditions when most motorcyclists would be huddling for shelter under bridges. The T-Max genuinely seems to offer all the advantages of the much-maligned scooter format, without suffering from many of the issues that gave rise to that battered reputation. And if you want to tweak the format, the T-Max has one of the most extensive after-market followings I’ve ever seen – at least, once you reach outside of our insular British bubble.

Don’t knock it until you’ve tried it. It may well be that the best low-intensity touring motorcycle is, in fact, a scooter.

Part One – How it all Began Firstly, let’s get the introductions out of the way. My name is Jon […]

Update on the Future of Carbon Offset